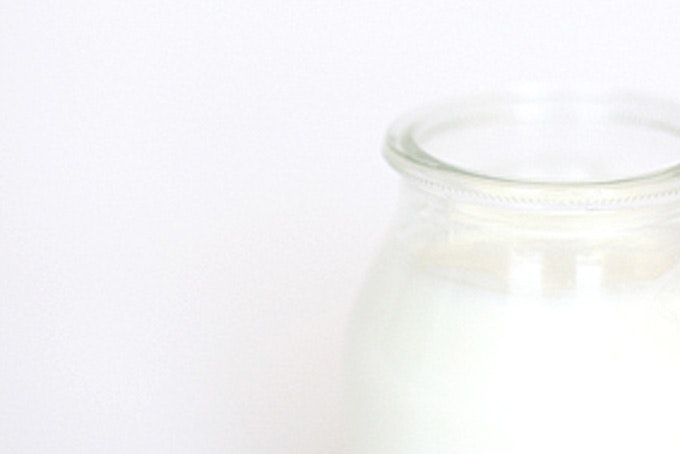 "Do you like plain yogurt?" Answer this question before buying a yogurt maker. There are countless ways to flavor yogurt and even more ways to cook with it, but what makes homemade yogurt worth the effort is tasting the immediate result of your labor.

When I was young nothing could convince me to eat plain yogurt. It was like eating straight sour cream. There was something unsettlingly vague about its gelatinous quality; it wasn't sprightly and proud of itself like Jell-O and it didn't melt in the mouth like ice cream.

My mother coerced me to eat bright pink strawberry yogurt. And I enjoyed it. Since then most of my experience with yogurt has been with the flavored commercial variety - a harsh, uniform substance that relies on mass production techniques, copious amounts of sugar and various thickeners to hide its inconsistencies.

Like wine, yogurt was discovered as a result of neglect. Upon finding that goat's milk left in a clay pot in the sun had turned into a strange semi-solid, imagine the courage it took for a person ten thousand years ago to taste it.

Making yogurt is far easier and quicker than wine, but each batch will taste slightly different, as it involves selecting from the infinite possibilities of milk, bacteria and time. Yogurt still involves the same process of discovery that our ancestors happened upon, but with the precise measurement of temperature and
time, you'll enjoy experimenting to determine your favorite recipe. Along the way you will learn to appreciate the inconsistencies.

Do you like plain yogurt? If you aren't sure maybe you haven't tried the right kind. In your local health or specialty food store look for Fage, the popular brand of "strained" Greek yogurt. This product is closer to a yogurt cheese, rich like a cream cheese, and will give you an idea of what you can easily make at home.

There are dozens of yogurt makers to choose from and they all work the same way - you create a concoction of milk and starter, the bacteria that makes yogurt. You pour the milk into the yogurt maker, whose main job is to keep the mixture heated at a constant temperature for four to eight hours.

The primary difference between makers is the configuration of the containers. Many makers have six or eight individual cups that mimic the size of store bought yogurt. The maker I have been using is one quart, the same size as the large family-sized container of yogurt. I'd rather clean only one container. Multiple containers might be better suited for a household with children or someone paranoid about roommates' double dipping.

A big decision that will affect the flavor and consistency of your yogurt is the starter you use. If milk is the body of your yogurt, then the starter is the brains. For your first batch, I recommend using a typical, plain organic yogurt like Stoneyfield Farm. The package must indicate live cultures (and the yogurt has to be reasonably fresh for those cultures to remain live) or the process will not work.

Think of the starter as the brains of the whole process. It contains the bacteria that triggers the fermentation process which turns the milk into yogurt. There are several types of bacteria - Stoneyfield Farm yogurt claims six "active cultures" (including L. Acidophilus, Bifidus, L. Casei and L. Reuteri), while Fage's package only claims two: Streptococcus Thermophillus and Lactobacillus Bulgaricus.

Certain types of bacteria ferment faster than others do. Some bacteria work at the beginning of the process and some later in the process. Yogurt that ferments quickly is more likely to leak whey (the watery substance that you'll see in a large container of yogurt that is several days old). Slower fermentation results in a dense network of proteins that embraces the whey.

Typically the more types of bacteria used, the faster the fermentation process. Some large dairy companies rely on a faster process to produce more yogurt, but use thickeners to reduce the degree of whey leakage. You can use the yogurt you produce as a starter for the next batch, but after several cycles the strength of the cultures decline.

Batches I started with Stoneyfield yogurt fermented faster, from four to five hours. The Fage yogurt took significantly longer to ferment to a firm consistency - six to eight hours. Was the extra time because there were only two types of bacteria, rather than six? Or because the Fage yogurt was imported from Greece, wasn't as fresh and had a lower bacteria count?

Both starters produced great tasting yogurt. The longer fermentation time led to thicker yogurt, mimicking the source of the Fage starter. The creamier, mousse-y consistency mutes the tang, delivering a softer flavor, closer to a pear than yogurt's typical green apple. The Stoneyfield starter produced a more "classic" yogurt flavor and consistency. You can add more powdered milk to produce a richer yogurt.

Another option is using Yogourmet powdered starter. The package lists three types of bacteria that have been freeze-dried into a powder that you mix with some milk. Fermentation to firm yogurt was fast, just over four hours. The consistency was similar to the Stoneyfield starter, but the flavor was a bit more tart.

At the San Francisco Ferry Plaza Farmer's Market an artisan yogurt maker sells a wonderful product called Saint Benoit. The yogurt is sold plain or flavored (strawberry, honey, plum). They use fresh, whole Jersey milk from a farm in Sonoma County located two miles from their kitchen. The yogurt is produced in ceramic jars selling for $3.25 each, which includes a dollar and a quarter deposit for the jar. After you savor the natural layer of cream at the top of a jar, the yogurt has a smooth, weightless flavor that, when served very cold, replaces heavy dairy on the tongue with the crisp flavor of a delicate, yet indistinct fruit.

Their web site invokes the French term terroir, which is commonly associated with wine production. They claim the cultures used are imported from France (they are the same two types of bacteria that Fage uses). While I did not excel as a biology student, their claim struck me as odd. What difference would it make - aren't bacteria simple, one-cell organisms? Have the French located a unique unicellular creature in their hallowed soil that produces yogurt like none other in the world?

To find out I invested in a jar of Saint Benoit to use as a starter. Using the freshest, organic whole milk I could find and eschewing powdered milk, I was able to produce yogurt with 6 hours of fermentation that had the same fluffy, smooth consistency of the original Saint Benoit. Having robbed a nation's intellectual property - I've continued to produce batches using the same cultures with only a slight decline in quality.

After you've tried the basic yogurt recipe, please download the homemade yogurt tasting notes PDF to print out. It will help you create your favorite yogurt.

Once you've discovered that you love making yogurt, I would suggest investing in another yogurt maker. I use dueling Salton YM9s that allow me to make a double batch of yogurt that will last all week and provide me with starter for the next round. At $18 each, they are a relatively small investment in money and counter space. Another idea to make the tedious heating process easier, suggested by a 101 Cookbooks reader, is a digital thermometer with an alarm, allowing you to do other activities while your milk is on the stove. It would be great to get recommendations a good digital thermometer (one that is accurate in liquids).

Yogurt has been called a "superfood," praised for its high calcium content, protein and B vitamins. Perhaps most importantly, scientists have proven that live cultures help maintain a delicate balance of microorganisms in the body, promoting healthy digestive and immune systems. The best way to enjoy these health benefits is to make yogurt yourself with fresh, organic milk.

Regardless of nutrition, yogurt is delicious and an important ingredient. Nearly every nation's cuisine has a recipe that uses yogurt. Hopefully in the future you'll see some of the best ones we discover reviewed here. Until then, I'll be enjoying my homemade yogurt plain or with a simple swirl of the best maple syrup I can find.

4 cups of fresh, organic 2% milk
1/3 cup of powdered milk
1/2 cup organic yogurt (this will be your starter)

Making yogurt begins with milk. Readers of 101 Cookbooks will not be surprised with the advice to buy organic milk that is fresh as possible. Slowly heat the milk on the stove over low-medium heat.

At this point you can choose to add powdered milk. Powdered milk creates thicker yogurt that takes less time to ferment. It's optional if you are using whole milk or two percent. Some skim and one percent milk include added milk proteins which make the product taste less watery and will behave the same way as if you added powdered milk.

For your first batch we are going to go with two-percent milk plus 1/3 cup of powdered milk. This combination of milk with the powder will produce a delicious, basic yogurt.

The most tedious thing about making yogurt is watching the milk get hot. You need it to hit 170 degrees, but not have it boil. So you want to pay attention to the pot and have a thermometer at hand. Once you've hit the target temperature, remove from heat and then wait for the milk to cool. Unless you put the pot in the refrigerator it will take some time to cool to 108-112 degrees.

If you are using existing yogurt as a starter, have it handy in a cup. When the milk is cooled to the proper temperature, mix a small amount it in with the yogurt. This will break up the yogurt and makes blending it with the rest of the milk easier. Once you add the starter, the milk can be placed in the pre-heated yogurt maker for four to eight hours. Refrigerate before serving. Makes one quart. 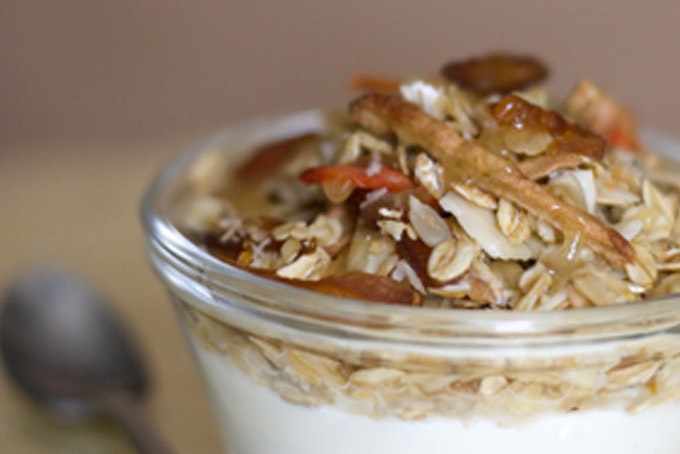