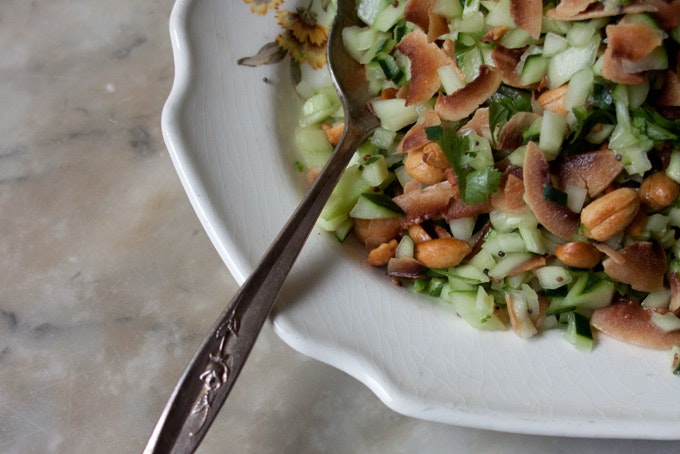 In addition to the Sharpie pens, the half-full mug of tea, the snapshots, the magazines, the letters to be mailed, and the stamps to go on those letters, I have two new cookbooks on my desk. Two books to really dive into. I've mentioned this before, but a number of us have been choosing cookbooks to focus on, and we've just chosen these to be next. Tender V.1 is by Nigel Slater, and How to Cook Indian by Sanjeev Kapoor was the other. These are the picks for the next two months, which should give you enough time to buy them or check them out from the library if you like. We did Breakfast, Lunch, Tea: The Many Little Meals of Rose Bakery last, and Moro East and The Essential New York Times Cookbook before that. Today's Cucumber Peanut Salad was my first foray into Sanjeev's book and it doesn't disappoint - chopped cucumbers, spices, toasted peanuts, coconut, and green chiles come together in a refreshing but surprisingly substantial salad.

Tender V.1 is by Nigel Slater, and is one of the most beautiful cookbooks I've purchased. At its most simple and basic it is about one man cooking from his garden. But, as anyone who has spent much time with a Nigel Slater book knows, the simplest ideas, or ingredients, or cooking techniques often develop into something completely captivating. And his recipes deliver. So, this pick was a no-brainer. How to Cook Indian was a bit of a wild card choice. After my book signing in Berkeley, I was invited by the shop to choose any book I liked. I tucked the massive orange Indian volume under my arm, went home, and spent hours the next morning tagging recipes - so many! And today's salad was one of them. I took some liberties with this based on personal preference, and readily available ingredients. That's just how I roll when it comes to cooking Indian these days. I don't always have all the ingredients on hand, but I try not to let that deter me. Instead of trying to get thing perfectly "authentic" or as written, I wing it a bit, based on what I think will taste good within the general framework of a recipe. So, for this salad - I didn't have fresh coconut, but I did have big, dried coconut flakes. I knew I could toast them, and they'd be great. So I went with it. I like to leave some of the peel on my cucumbers - so that is what you see here. That sort of thing. I forgot to grind the peanuts - the sky did not fall.

You can prep all the components ahead of time, but don't toss the salad until just before serving. If you do the peanuts will lose their crunch because the cucumbers give off a good amount of water. If you use two chiles and leave the seeds/veins in - this is quite a spicy salad, so feel free to adapt for your tastes. You can just use one chile, and if you're still worried, remove the seeds and veins. It can be made vegan by substituting sunflower oil for the ghee.

Halve the cucumbers lengthwise, scrape out the seeds, and chop into pieces roughly the size of pencil erasers. Just before you're ready to serve, transfer to a mixing bowl and toss gently with chiles, peanuts, coconut, lemon juice, and sugar.

Over medium heat melt the ghee in a small skillet. When hot stir in the mustard seeds. They are going to sputter and spit a bit, and when this starts to happen, add the cumin for 15-30 seconds, just long enough to toast the spices. Cover with a lid if needed. Remove from heat, stir in the salt, and immediately stir this into the salad. Turn out onto a patter topped with the cilantro.

Nigel Slater is such a terrific writer, let alone a terrific cookbook author, I can't wait to get my hold on his newest work. And it's the best feeling coming across a recipe that sounds delicious AND I have all the ingredients for in the house. Thanks!

i've never really been one to love cucumbers, but i have to say that this sounds incredibly flavorful and refreshing!

How fun to walk around after your book signing and pick out a cookbook! This salad dish looks delicious. The crunchiness of the cool cucumbers and the peanuts would be a nice combination. I find main courses easy enough but finding sides like this is good too.

Heidi this looks delish!! I love cucumbers AND I love peanuts or anything peanut sauce related. This is perfect for me. I also won Helen of Tartlette's give away for your book and I posted about it a couple days ago...but just wanted to thank you so much for the book. It's amazing, beautiful, and you inspire me SO MUCH. Your recipes, your photography, your accomplishments..I want to be like you when I grow up :) HS: Thanks for all the nice words Averie - your cinnamon-sugar chickpeas look really intriguing! Might have to give those a go.

Why have I never thought of this?! Genius!

What a nice combo of flavors!

I cannot wait to get Nigel's new book. This dish looks wonderful too. I typically use cucumbers in cocktails - and really need to incorporate them into my salads, that's where they belong! :)

This sounds so perfectly refreshing!

Blog is the New Black

Interesting, and unlikely combination of such wonderful ingredients.

Mmm, yum! Lately I've been making mine by shaving cucumber (with the slicer on the side of the grater) and I like boiled peanuts with mine. They add the saltiness for me, and they are nice and soft.

I liked so much your todays recipe, i also cook a salad from India What a coincidens!

This is a perfect meal for those of us who eat higher raw (using a cold-pressed sunflower oil). I love that it if fresh and light but there is depth to the spices and seasoning.

Once I cooked cucumber chutney with all these ingredients except peanuts. It was pretty good. The idea of making a salad with them inspires me so much, it seems better than my chutney, so fresh and spicy. ^_^

Cucumber peanut salad, but of course! Thank you for the reminder to make this delicious salad again. Being a South Indian, coconut and peanuts are always in my kitchen :-)

I whole heartedly agree with your admiration for nigel slater. His ingredients led recipes have been an inspiration to so many of us. Lovely post as always.

hi heidi, i've enjoyed salads with cucumbers and peanuts, but the use of cumin and coconuts sounds as if it will make it a really interesting salad.. will try when the local cukes are in abundance! on another note, i am FINALLY getting around to cooking from your gorgeous new book and i'm loving it - so far only done really simple ones (biscuits, roasted strawberries, and panakam) but they were all lovely and i can't wait to try more! thanks for another gem of a cookbook - it was well worth the wait.

What a scrumptious dish for this Spring, when gardens and farmer's markets are in full bloom! I think it would be excellent on croissants or sesame crackers too :), Miriam@Meatless Meals For Meat Eaters

If I can ever eat cucumbers again (right now they make my mouth itchy due to a mild allergy) I will totally make this salad. It looks delicious. I also don't know what I'd do if a bookstore told me I could pick any book I wanted. I'd need a week to decide. What a lovely gift to you!

Wow. What a perfectly unexpected combo of flavors and textures, and perfect for the beautiful spring weather we're having too! I can imagine this being a great appetizer scooped into butter lettuce leaves.