I came across a recipe that caught my attention in Anna Getty's soon-to-be-released Easy Green Organic. It was a recipe from a family friend, which in my mind is always a good sign, and the last sentence in her headnote stated, "the ingredient list is long, but these are the best green beans you'll ever make." Green beans, crème fraîche, garlic, golden raisins, almonds, a ranges of spices...in all, seventeen ingredients, of which I had sixteen. So I wanted to give this general idea a go, and it's not exactly green bean season, but I made them anyway. And they were so insanely good, even though, admittedly, the green beans I used were sad, sad, sad. My advice? Make this recipe, like this, the next time you see good green beans in your market. In the meantime, make the exact same recipe substituting something that is in season in your corner of the world. I'm going to make it with cauliflower. Like tomorrow. Or the brussels sprouts I bought the other day? Those would be good too. And asparagus season isn't far off. I'm confident there are any number of substitutions you could make here that wouldn't disappoint. I made a few tweaks to the recipe in Anna's book, reflected below. I like slicing green beans into little o-shapes, so I did that here. I also wanted to make this more of a one-pan meal, so I cut back significantly on the raisins and introduced tiny tofu cubes. I suspect little pan-fried paneer cubes or tempeh would also work. The version in her book is named John Pepper's exotic green beans, I renamed them here in case someone is looking for the original version - so there wouldn't be any confusion. Thanks for the inspiration Anna, your book turned out beautifully, I've enjoyed spending time with it.

Use a white wine that you'd want to drink after opening. And for those of you looking to speed things up, you don't need to slice the green beans, but it was a good call, the sauce gets into all the nooks and crevices.

Cook the green beans in a pot of well-salted boiling water for about a minute, just long enough that they lose their raw edge. Drain and dunk in ice-cold water to stop the cooking. Drain again and set aside.

In a small bowl cover the raisins with scalding hot water for five minutes, drain and set aside.

Heat your largest skillet over medium heat. When the pan is hot, add the oil, garlic, onion, and bay leaves. Cook for 5 minutes, or until the onions and garlic start to brown just a bit. Add the wine and cook until it has mostly evaporated. Carefully remove the bay leaves. Stir in the paprika, cumin, coriander, curry powder, salt, crushed red pepper flakes. Stir in the tofu and raisins and cook until heated through, a minute or so. Add the butter and green beans and stir until the butter has melted. Remove from heat and stir in the crème fraiche, then most of the almonds and most of the cilantro. Taste and add more salt and some pepper if you like. Serve topped with any remaining almonds and cilantro.

Inspired by a recipe in Anna Getty's Anna Getty's Easy Green Organic, to be published by Chronicle Books, 2010. 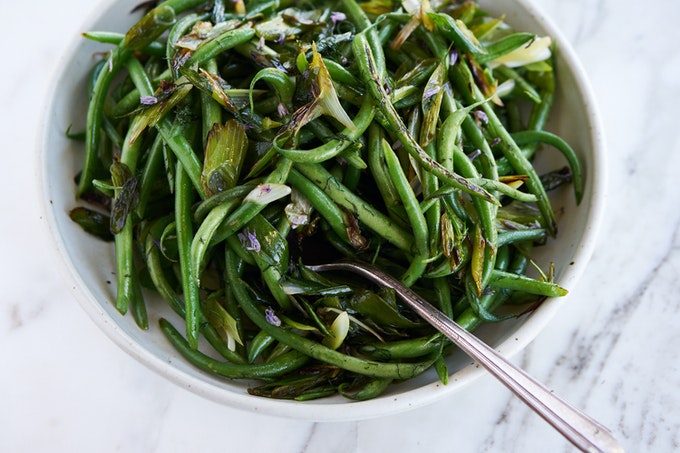 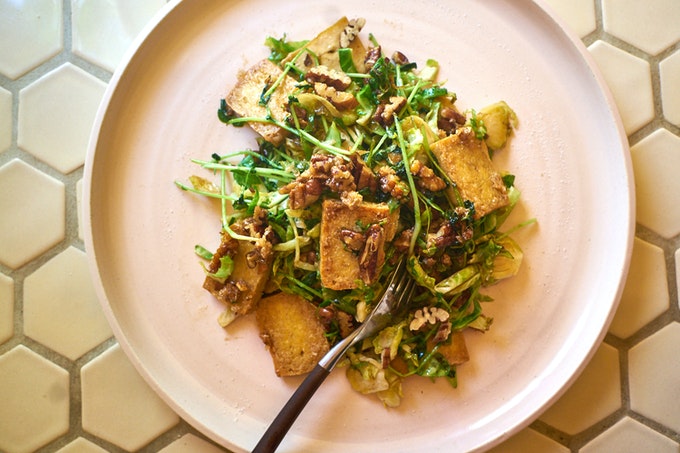 Nice blend of flavors. I never thought making a green bean dish like this one but you just opened up my eyes to other possibilities.

Since I work a lot with beans, one variation that always brings the smiles on: forget the dry spices totally. keep everything else AS IS. Blanch, olive oil, almonds, cranberries or raisins... all that. But... for the spicing up do this: grind together in a blender: one tablespoon of greek yoghurt or yoghurt cheese, 4 tablespoons of cilantro, 10 leaves of mint, 2 green chillies, one teaspoon grated ginger, and half a lime (juice, pls) I will also add: 1/3 tsp sugar, as it always enhances the lime, takes off the edge and presents the lemony-ness gloriously. Keep everything else as is. Only, no need to cook all this once you have blanched it right... use this as a dressing, toss the beans in this, add the salt, and then the nuts and raisins...

Wow, your pictures are just stunning. Thanks!

Sounds great! Does anyone have suggestions as a substitute to the creme fraiche or sour cream? I recently had to omit dairy from my diet but have no idea how or what to substitute. Any suggestions would be appreciated!

Sounds wonderful, except for the tofu. Ugh! ugh! ugh! I think the mushrooms would substitute nicely -- perhaps a variety cooked separately and added at the end. Thanks for your inspiration.

Aww man, I promised myself to cook from my cookbooks, and here you go posting more recipes I want to make.

This is such a hearty and flavorful looking dish. I definitely want to try this with brussels sprouts.

How I wish more vegetables were in season here in Maine..... I guess I'll have to wait a few months to make this.

I am going to try this recipe at work for a potluck Cabin Fever Luncheon we are having in February. It sounds really delicious with the golden raisins and the toasted, slivered almonds. Is there a substitute for the white wine I could use? Any suggestions?

string beans are such a versatile vegetable. there are so many ways to dress them up, but they are also just as good, plane and simple with a bit o' lemon. Although I am not crazy about tofu, the spices and creme fraiche are an intriguing combination.

Personally, I love the "extra version olive oil" phrase and hope it is the start of a new trend. The "extra virgin" has always been a puzzle in common language, since it's impossible: you're either virgin or you're not -- you can't be extra! If version is used (as suggested in context here in the recipe), there can be an "extra" version (perhaps even an "extra extra"), and there can be "regular" versions, "lite" versions, and so on, all with the word version. Virgin (especially when coupled with "extra") should be retired in preference to version (as in your recipe). The word "version" is additionally free of ideas that are hard to explain to children and is therefore "better". However, I'll bet "version" turns out to be a mistake (alas!). This recipe combines some really fine flavors and I look forward to trying it! I like that it can be used with other main vegetables too. HS: Wow. That is an impressive typo, even for me. Got a chuckle out of your note :)

Heidi, The gloriousness of this recipe has inspired me to write and thank you for the joy of your inspirations. Blessings.

This not only sounds like an excellent green bean recipe, but I like your idea of using it as a "surround" for other vegetables.

I have an abundance of snow peas growing in my yard, I think I'll try this with those. Sounds great!

love the flavor combinations going on here..One question, can I substitute white wine with white wine vinegar? only reason is that I have everything else from the ingredient list except white wine..I believe I would have to reduce the quantity to may be couple tablespoons? HS: Hi Gayatri, just leave out the white wine, follow the directions aside from that, and make tweaks to adjust the flavor toward the end until it is to your liking.

And I have some asparagus in my fridge waiting to be used. Thanks for the inspiration.

Ah, it seems I've been putting dried fruit, nuts and spices in everything lately...can't seem to get enough of it. This gives me one more excuse, looks amazing and I love, love, love one dish one pan meals. Thanks!

So, what was the seventeenth ingredient? ;) HS: The green beans :)

Wow, looks so good. I love the idea of paneer cubes - might have to try that!

Made a vegan version using coconut milk instead of creme fraiche and no butter at the end. Uber yummy. Many thanks! Jenna