I've been straining yogurt, aka making labneh, quite a lot lately. It started when I received a package from Jaipur, India. The package was cloth-covered and hand-stitched at the seams. My address in massive black penmanship. It may have been the most intriguing package I've received via post, and was sent by my friend Melissa, who (some of you might remember) I met after sitting down for lunch at the Anokhi Cafe. Melissa runs the cafe, and we hit it off from there. I remember her telling me about her favorite strainer - which she described as an unattractive plastic piece of crap, but one that does a fantastic job on the yogurt front. She sent me one! And she was right, this strainer has a very fine, double lining, which allows the liquid whey to flow from the yogurt leaving a thick silky white yogurt cream behind - perfect for spreading, rolling, and blending. I thought it might be interesting to keep a list of all the things I did with the last batch I made. And, before I get ahead of myself, you really don't need a "special" strainer to do this, you can use a couple layers of cheese cloth instead - a bit more messy, but it does the job too (I'll put detailed instructions in the recipe section)... 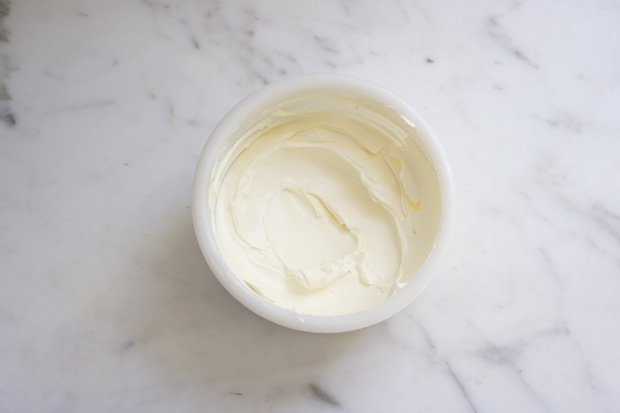 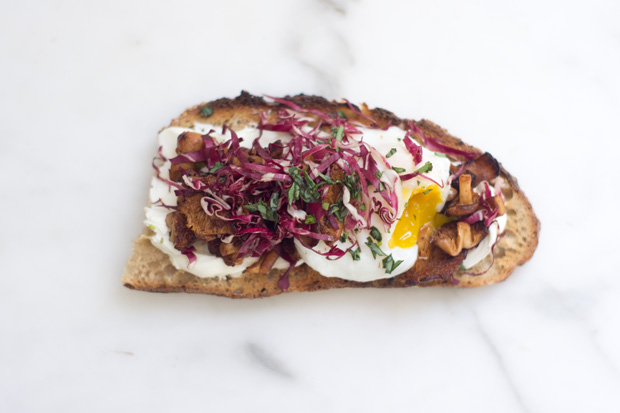 With the last batch of labneh, here's how I used it....

- The above open-faced sandwich was on of the first things I made - a fast A+ lunch. Thin toasted bread, a layer of labneh, pan-fried hedgehog mushrooms, poached egg, shredded radicchio and tarragon, sea salt.

- smashed a few threads of saffron with brown sugar in a mortar and pestle added a bit of labneh, and used it to fill pitted dates.

- shaped into small balls, rolled in za'atar, drizzled with lots of olive oil.

- Served a dollop alongside an asparagus frittata with loads of fresh herbs and a drizzle of lemon olive oil.

- slice of rye toast, layer of labneh, layer of jam.

- I've made it with less salt and used it as a beautiful frosting. It kind of ends up being in the realm of a cream cheese frosting. Sweeten the labneh with honey, sugar, sifted powdered sugar, etc - whatever your preference.

I'm also, of course, curious about how you use it. Give a shout in the comments if you make strained yogurt and do interesting things with it! xo-h

This recipe uses a large container (1 quart) of yogurt, which strains down quite a lot. That said, ff you think you'll have a hard time using this much labneh, half the recipe. The longer you let the yogurt strain, the thicker it gets.

If you don't have a strainer like the one pictured above, don't worry, you can use cheesecloth in its place. Simply line a deep bowl with a double layer of cheesecloth. Stir the salt into the yogurt and pour into the cheesecloth. Bring the cloth together into a bundle and secure with a string. Hang the bundle over a bowl (or wide pitcher), making sure the bottom of the cheesecloth is suspended in air (you don't want it sitting in the liquid). I used to do this by securing the bundle to a wooden spoon. Cover the whole contraption, and refrigerate for at least 24 hours, but go longer if you like - it's all about personal preference. Much of the liquid will drain out and the yogurt will thicken. Remove from the cloth and proceed with one of the above suggestions.

Makes about 2 cups of labneh. 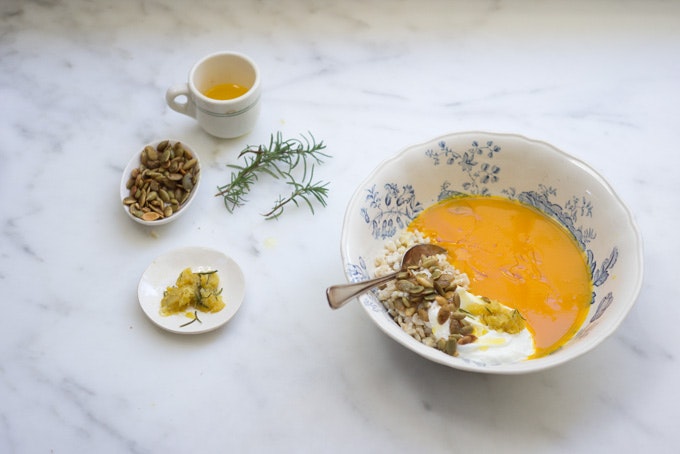 Silky textured and vibrant, the pumpkin soup I made as soon after 40 hours of travel back from India. It has a herby rosemary butter drizzle and lemon ginger pulp, and completely hits the spot. 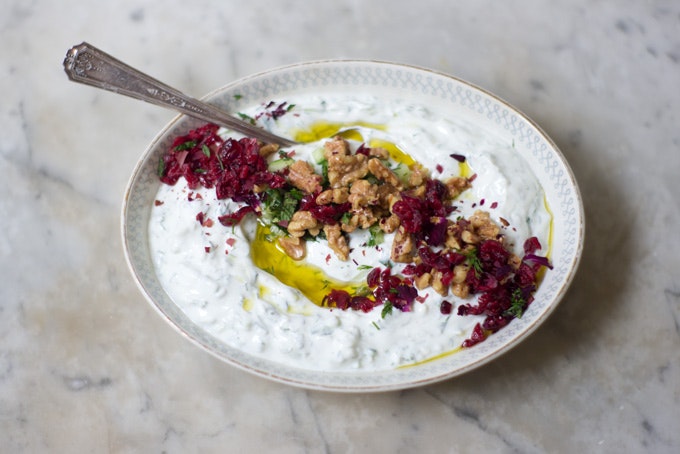 The prettiest dip in my repertoire - my take on the Iranian preparation of Mast-o-Khiar (yogurt and cucumber). I use lots of fresh herbs, dried rose petals, toasted walnuts and a pop of added color and tartness from dried cranberries.

It is sometimes the cheapest contraptions that do the trick, right? I still have a small knife with a plastic handle me and my dad bought at a market in Paris because we couldn't wait to slice into a ripe melon we had just bought - it cost us about 1 EUR and it is still my favourite knife for slicing tomatoes. I love all of your ideas for the labneh - I think I would also try mixing it with chopped cherry tomatoes, basical, garlic, salt and pepper to have with bagels. Or with a freshly made blueberry compote for dessert. And yes, it sounds like a wonderful alternative to cream cheese for frosting.

I love labneh, we my friends we like to go to Cafe' Mogador in the East Village wher they serve the best Labneh in town (or so I like to think). Never thought of making it at home though, something I should really do!

I love labneh on a slice of sourdough with barely cooked fruit and a tiny drizzle of honey. Great idea to put it into dates. Rather than any clever hanging arrangement, I've found works it works really well just to put the muslim cloth in a sieve that rests high over a bowl. A couple of heavy ceramic pots on top of the yogurt to weight it down gives you even thicker labneh.

Labneh and Za'atar are like Pb&J. Nothing better than dipping a piece of pita bread into a marriage of the two. Also, I recently started using labneh as in the most delectable gluten-free lemon muffin recipe. It adds incredible moisture to GF baked goods. Thanks for sharing your labneh tips :)

Open faced sandwiches were always my favorite, as it's very popular in Poland. It makes me feel like at home :)

Marta @ What should I eat for breakfast today

I've had good luck with a simple strainer and a double layer of cheapo paper towels. They peel right off the bottom of the strained yogurt and you don't need to worry about cleaning them as you would cheesecloth.

I add a little minced garlic and salt and use it as a dip, instead of cheese spread. I also make the Indian yogurt based sweet called Shrikhand with it, my favourites are the dry fruit, mango versions of it.

This is how we make hung yogurt. I had no idea it's so similar to Labneh! Thanks for sharing.

I use and love this strainer: http://www.amazon.com/Cuisipro-Donvier-Yogurt-Cheese-Maker/dp/B000064841 I like putting labneh seasoned with chives in my daughter's lunchbox, to spread on crackers or dip veggies in. I love that it doesn't spill or leak like yogurt!

Your open-faced sandwich looks dreamy. This is not vegetarian, but labneh is also nice on slices of dense rye or whole grain bread with smoked salmon and cucumber + s&p.

Labneh (store-bought, thus far) has been making its way into a lot of my meals too lately! I like it on toast in the morning, sometimes with a drizzle of honey. Its sharpness is particularly nice with a caraway-studded rye. I've also found that it does a good job of counterbalancing the sweetness of some dishes, like the red pepper bulgur pilaf in Plenty. Do you find that there's a significant difference between the store-bought stuff and your homemade version?

Mmm!! This looks so amazingly tasty! That open-faced....

I've always been curious about this.. I've seen versions where they are rolled into balls and herbs, then placed into a jar of olive oil and kept in the fridge. I'm going to look for a fine sieve and make this.. it just looks too good!

I have been wanting to do this for SO long! I feel like it would be great used to make a cream pie... maybe mixed with sweet potato? Can't wait to try it!

It's all yogurt, all labne, *all* the time around here. What do I have to do to get you to come south? I'll feed you all kinds of yogurty goodness. The fridge is literally (LITERALLY!) full of it!

I love your sweet labneh ideas, Heidi. I've also been making loads of labneh lately. I like to roll it in chilli, rosemary and fennel to store in oil. Also, it's delicious mashed through fried slices of eggplant and mint to serve as a side dish.

I've made it without salt and used it in place of cream cheese in cheesecakes. It goes really well in a baked cheesecake! Also, an option if hanging it seems like a hassle - I line a strainer/colander with cheesecloth, and make sure there's plenty of clearance between the bottom of the strainer and the bowl.

This looks absolutely amazing, and the za'atar treatment reminds me exactly of what they serve with crackers and a swirl of olive oil at this little bakery on 9th Street. Thanks for reminding me to give it a spin at home.

It looks so thick and luscious! I just want to run my finger right through that smoothness :)