I'm sitting there with three tubes of kraft paper, a ball of twine, two dwindling rolls of tape, and a small mountain of presents to wrap. Fat, juicy raindrops are pelting the window panes. Wind is making the bones of the house creak, and I suspect it will be dark by 3:30 this afternoon. There is a pot of day-old red posole bubbling away over a low, low flame in the kitchen. Which, by the way, is the warmest place in the house right now. I'm eager to pick through the pot to procure more than my fair share of flowered kernels. Kernels I'll then hide under thin whisps of pan-fried tortillas, a pinch of toasted Mexican oregano, and a bit of crumbled feta. It will be just the right thing to have for lunch on a day like today. 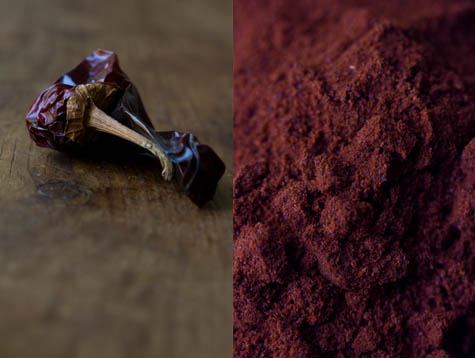 I've had posole on my mind for weeks now. And this is just one of a series of posole-centric pots I've cooked up since my friend Gwen brought a huge pot of posole verde and all the fixings to a big family-syle dinner we had at Lori's house in Napa - you might remember Lori from the posts I've done about her cabin. Hi Lori, hi Lisa, hi Gwen :) The posole that night? It really hit the spot. 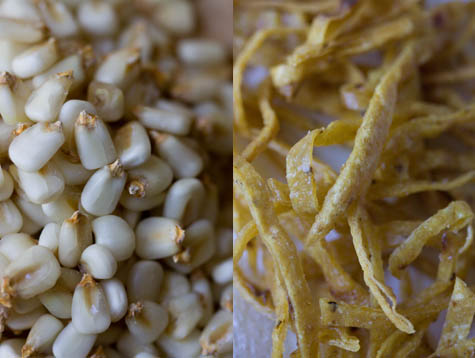 Gwen mentioned using the posole verde recipe on the Rancho Gordo site, but tomatillos are scarce right now, so for this pot I went the red route. I started with Deborah Madison's posole recipe from Vegetarian Cooking for Everyone, which essentially gives you a base recipe for cooking posole/hominy. You then add her chile colorado style red sauce (to taste), which takes the posole into the red realm. I've adapted the recipe to combine the two components, and incorporated a few personal tweaks as well. You'll find posole is quite adaptable, so really, just season and make changes based on what tastes good to you.

It is worth mentioning, you'll end up with plenty of extra red sauce. Not a bad thing because it actually freezes well, as does drained pozole/hominy. So, while I don't normally think of pozole as an on-the-fly weeknight meal, if you have two of the components in the freezer, you can thaw them earlier in the day, and be ready to go, relatively quickly, later in the evening.

I'm just noticing that there aren't many popped kernels in the lead photo. There were plenty, but I must have spooned them all into my bowl! Merry Christmas & happy holidays everyone.

Look for ready-to-cook hominy - the kind you soak overnight, and then cook. A lot like you would beans. I used Rancho Gordo white corn posole, but there is also a thread on Chowhound on how to source ready-to-cook posole As far as the choice of chile peppers goes, I used dried red New Mexican chiles, they have mild heat and aren't overly intense. You might also try guajillo chiles, or if you don't mind a bit more heat, Aji Amarillo chiles with their fruity overtones might be nice. Or maybe try a blend of mild-ish chiles. For the sauce, be sure to buy ground red chile, not chili powder - which has other ingredients mixed in. Also, for the vegans out there, this can easily be made vegan by using something like avocado as a topping in place of the cheese.

Soak the dried posole overnight in a large bowl of water. The next day drain the posole and place it in your largest thick-bottomed pot along with 3 1/2 quarts/liters of water, the onion, garlic, chile peppers, and oregano. Bring to a boil, then simmer until the posole is tender, and many of the kernels have flowered into popcorn shapes. This can take anywhere from 1 1/2 to 3 hours. Season with a couple teaspoons of salt roughly halfway through the cooking process. Season again once the posole is fully cooked.

In the meantime, make the red sauce by combining the olive oil, onion, garlic, and oregano in a medium saucepan over medium heat. Stir continuously until the onion takes on a bit of color, a few minutes. Add the flour and cumin, and stir for a minute or two or until the flour browns a bit. Whisk the chile into 2 1/2 cups / 600ml water and pour it into the saucepan, whisking all the while. Stir until the sauce thickens a bit, dial down the heat and simmer, stirring occasionally, for fifteen minutes or so. Stir in a squeeze of fresh lime juice, and season with the salt, adding more to taste if necessary. Set aside until the posole has finished cooking.

Stir 1/2 cup / 120ml of the red sauce into the pot of posole. You can add more red sauce, a bit at a time, until it is to your liking. Spoon the posole into bowls and top with tortilla strips, cheese, and oregano.

This recipe was adapted from Vegetarian Cooking for Everyone by Deborah Madison. 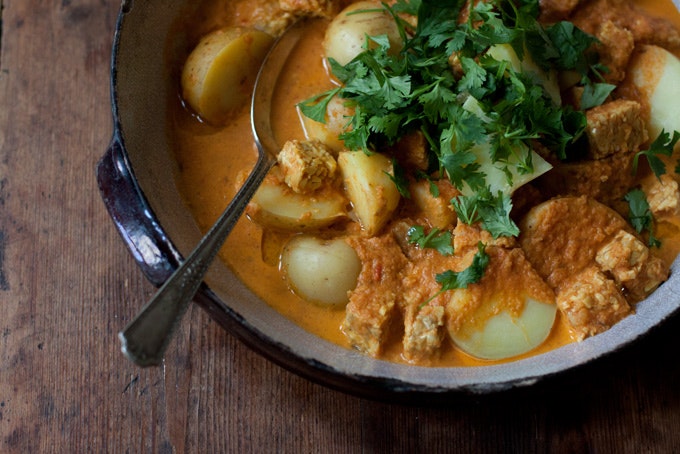 A vibrant tempeh curry recipe loosely inspired by a recipe from Lora Zarubin's cookbook, I am Almost Always Hungry. 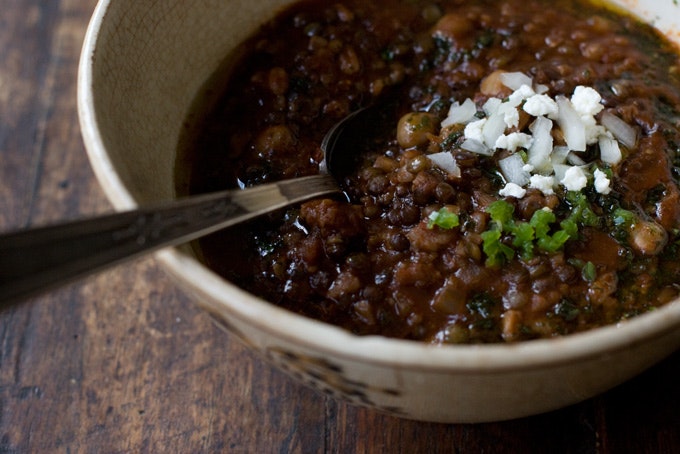 The best pot of chili I've made in years. A vegetarian chili recipe Inspired by a bunch of those little bags of remnant grains and pulses that collect in my cupboards - bulgur, farro, and lentils, join chile peppers, crushed tomatoes, some chickpeas, and a secret ingredient.

What a delicious recipe; this looks amazing. Thank you for sharing this fabulous recipe. Happy Holidays to you and your family. I can't wait to make this on a cold winter day...it's such a cozy recipe!

I love the color of the posole against the color of the old wood. And the tortilla strips, feta, and oregano on top ties everything together and makes me want to break through the screen of my macbook to get a taste of that posole. Too bad they don't have smellovision yet... Have a merry, merry Christmas Heidi! :)

Hi Heidi! I'm in the snowy Midwest, planning on a big family sleepover at Kyle's so no one misses Christmas. Aside from the kids, who can only think of presents, everyone is talking about food. And on the top of my mind is the big, delicious pot of posole we cook up for Christmas day dinner every year. I can't wait to try another twist on our favorite holiday tradition. Yours looks incredible! Happy holidays to you, Wayne and your families! Gwen HS: Say hi to your family for me Gwen, I hope you all had a fantastic Christmas. Safe travels home, xo

I have Vegetarian Cooking for Everyone, but I never noticed the posole recipe. This seems like the perfect antidote to the ice storm we're about to experience. Happy New Year!

Oh I have never heard of anything like this but it sounds great!

I had posole for the first time last week while celebrating my sister's birthday in Idaho. Her friend, Mo had a great recipe for green posole with mushrooms. When my friends Lori and Cheryl gave me a bag of Rancho Gordo posole, my Christmas Eve menu was set! I have a big pot in the refrigerator - along with sparkling cranberries to add to my cheese tray. Thanks for a year of amazing recipes!

I first had Posole in Costa Rica and loved it. We made a Sante Fe style Christmas dinner one year and served it. It is a beautiful Christmas soup. Merry Christmas to you, my favorite food blog!

This soup looks wonderfully hearty and savory, perfect for the current cold and windy weather. I hope you have a wonderful holiday. I've truly enjoyed reading your blog this year, and look forward to all of the great things that have to come. Merry Christmas!

This is perfect for my holiday appetite!! I don't know why but I've been craving hardy mexican flavors in between the root veggies and stews. I made this Smokey Chipotle Vegetarian Chili the other day and it was so satisfying and refreshing, if still warm and comforting for the season. I can't wait for my Christmas detox with this spicy delicious soup!!

Must be a posole kind of time. I twittered Rancho Gordo to thank them for their white corn posole. It made a wonderful green chile pork posole last night. It's doing the re-simmer on the stovetop as I write for a second day lunch. Thanks, Heidi, for a delightful year of blogging and food. May you and yours have a wonderful holiday and New Year.

Nice recipe Heidi, one that begs to be made after the holdiays when I'm back to my lazy ways of eating the same delicious dish for days on end. Now about your rain, seems the jet stream swapped out our weather systems as it's sunny up north in Seattle...well, at least for the time being. Warm wishes.

Happy Holidays, Heidi! As the earlier comment--thanks for the sparkling cranberries recipe. I got rave reviews last night and today at work, even though I waited too long to toss on the smaller granules of sugar on the first batch and they didn't stick :(. Live and learn--I'm making more today!

I love trying out your vegetarian recipes (on my road to reduced cholesterol). This one is very appealing and I'll be trying it soon. Thanksand Merry Christmas and a happy New Year!

First, Merry Christmas. Secondly, what a lovely recipe. Perfect for all of the windy, wet weather we have been having.

Heidi, I made your sparkling cranberries last night and they are wonderful. I had extra so I decorated the table with them, and now I put them in a cake ! This recipe looks wonderful - makes me long for my friends in Albuquerque and a nice meal at Pasqual's community table in Santa Fe, (not that this was on the menu, last I checked). I will definitely be trying this a.s.a.p. Happy wrapping ! Thank you for all you do ! xo Michaela

Hi Heidi! Thanks for the great recipe, it does sound good on a cold day. I just wanted to wish you and Wayne a wonderful holiday and a Very Happy new Year!!

Posole! I haven't had that in a hundred years. That sounds great. I think I'll make that over new year's weekend. Thanks! Merry Christmas to you and yours.

Hello Heidi, I don't think I've ever had posole, but this looks great - it would be a kind of dish that I'd eat in a huge bowlful :) Not sure if I can get my hand on hominy in Japan, but I'd at least like to try the sauce over something like barley maybe. A very Merry Christmas to you and Wayne! x

I've never had posole - and confess I've never even seen red posole for sale. That would be a perfect dish for the horrible weather we're having... I am wondering if posole is always served as a soup, or if it would also work with less liquid, or maybe even pureed? Merry Christmas to you and all your loved ones! HS: You can do all sorts of things once the posole is cooked, it is particularly nice swimming around in a bit of broth though.

Love the colour palette on this post. Have a great Holiday Heidi. Hope to see you in 2010. I need to start another round of those urban hikes... HS: Thanks Sam, count me in. I hope to see more of you in 2010 - this year seems to have flown by so fast :/