I've worked my way through a stack of garlic soup recipes over the years. Some clipped from magazines or torn from newspapers, others scribbled in shorthand on scraps of paper. It is a delicious realm of soups, and there have been plenty of notable bowls amongst them. To that extent, I thought I'd share the one I love most. It's from Richard Olney's classic, The French Menu Cookbook. Creamy and full-bodied without the use of cream, it is made by simmering a dozen or so cloves of garlic in water with a few herbs, then thickening it with a mixture of egg and shredded cheese. It's hard to beat a big ladleful poured over crusty, day-old walnut baguette with a finishing slick of olive oil. 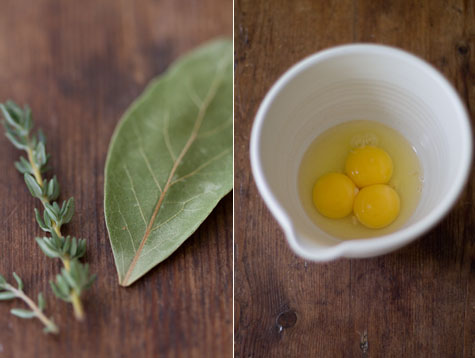 The garlic mellows as it simmers and works itself into something round and mild - not at all harsh or aggressive in flavor or fragrance. It's a restorative soup, one that I make when I want something simple and direct, but with more body than a clear, brothy soup or consommé. 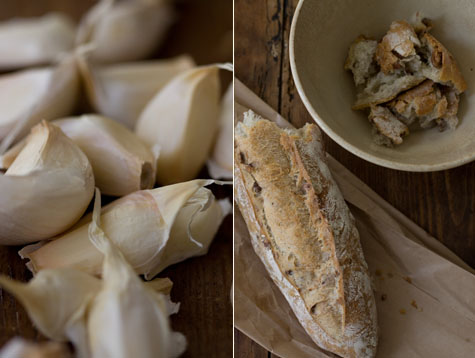 And, it's worth noting, if you've ever made ice cream from scratch, you should have no trouble here. The technique is quite similar.

The following recipe reflects how I make this soup, with my notes/words. The original recipe often calls for a range of a particular ingredient, for example, 10 - 15 cloves of garlic, or healthy pinch of thyme....I decided to included the amounts I use when I make it.

Bring the water to a boil in a medium saucepan and add the bay leaf, sage, thyme, garlic, and salt. Heat to a gentle boil and simmer for 40 minutes. Strain into a bowl, remove the bay and sage leaves from the strainer, and return the broth and garlic back to the saucepan, off the heat. Taste and add more salt if needed.

With a fork, whisk the egg, egg yolks, cheese, and pepper together in a bowl until creamy. Slowly drizzle in the olive oil, beating all the time, then add (slowly! slowly!), continuing to whisk, a large ladleful of the broth. Stir the contents of the bowl into the garlic broth and whisk it continuously over low-medium heat until it thickens slightly. Olney states, "just long enough to be no longer watery." I usually let it go a wee-bit beyond that - until it is the consistency of half-and-half or cream. Place a handful of torn bread chunks into the bottom of each bowl and pour the soup over the bread. Finish with a drizzle of olive oil, and serve immediately.

Makes about 4 cups of soup.

This recipe was adapted from The French Menu Cookbook by Richard Olney. Originally published in 1970, this edition was republished by Ten Speed Press in 2002. 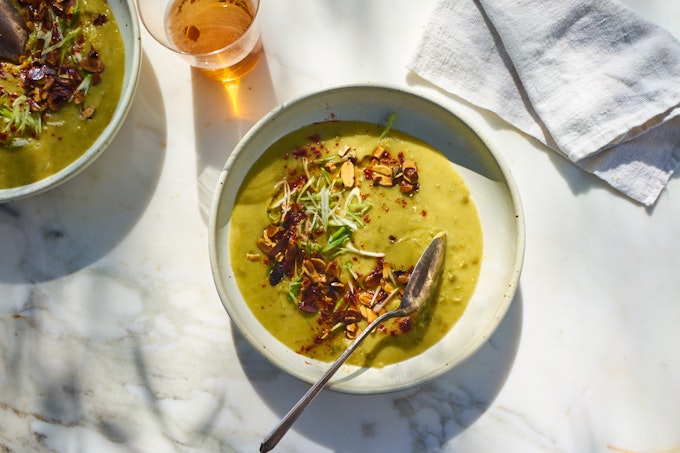 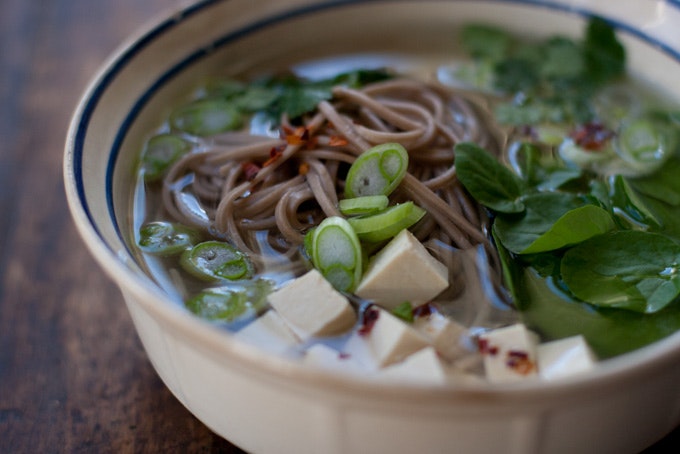 A simple, everyday approach to miso soup - it yields me a bowl of soup in five or ten minutes. You can keep it simple if you like, but in this version I add soba noodles and tofu, and a few garnishes. 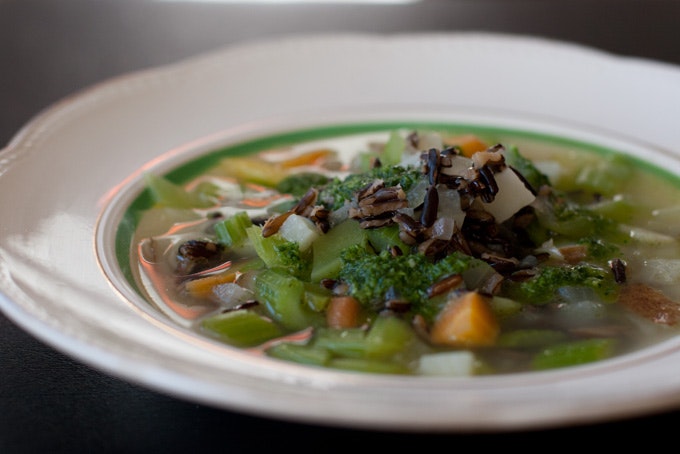 A chunky celery soup perfect for a winter day - celery, carrots, a potato, an onion, a bit of garlic, and some leftover wild rice.

Heidi- I love the site. Love it. I just made garlic soup with shrimp a la Mark Bittman last night, but now I'll have to try this, it looks more complex in terms of flavor and texture. Also, are you still involved with Kiva? If so, you should read this. I stumbled across it today and thought of your Kiva team. Keep up the great work! HS: (updated 10/16 - Thanks again for the link David, I was happy to read Kiva CEO Matt Flannery's response. I though I'd post it for those of you who are interested.

Dear Heidi, this sounds delicious, but mostly I am here to thank you, because for the last few days I have been following your blog, but not only that. Actually, I have decided to change the way me and my family eat. I have made some of your recipes and I must say that they are not only delicious, but my mood changed, my energy levels are higher, I feel happy and light. For years now I have a constipation problem, bloathing, feeling heavy. It is gone! I even sleep better!!!! Thank you so much for changing my life. All best! HS: Thanks for the nice comment doroula! It's the sort of note that really makes my day.

Well, I had no idea what to make for dinner or what I was even hungry for. Now I know the answer to both. Thank you:-).

my Spanish mother-in-law makes a similar soup, but instead of using the eggs for a "binding pommade" she just drops them in to boil, egg-drop style. it's a delicious and convenient way to get a similar result. this version looks absolutely lovely!

This is one of Phoebe's all-time favorite comfort foods. Her mom used to make a version of homemade garlic soup when she was a kid, and now it's all she craves when she's feeling under the weather.

Okay, I'm going to make the soup. I'd like to mention how lovely the photos are in this post. I love photos of the details and these tell the story beautifully.

Now won't that just get the immune system pumping out some goodness into this cold and flu season.

Meghan (Making Love In The Kitchen)

This looks amazing. Cream based soups don't always cooperate with me, so my garlic soup options are limited. I'm really excited to try this!

Perfect ... it's garlic season., (I always want to plant more, more, more). I also am very fond of the bowl in your photograph. All the best, Michaela

This soup sounds simply fabulous. I cannot wait to try the recipe (and it will certainly help me put a dent in the SIX POUNDS of garlic that I was given this week....)

For those "stuck" with the metric system: 1 quart [US, liquid] = 0.946 litre, 1 cup = +- 227 gram I love your site and your recipes (and bought your book!) but this affection for quaint measurements still baffles me every time I visit.

Thanks for the recipe - I've never tried garlic soup before but it sounds great!

mmm... and i just happen to have all these ingredients in my kitchen! sweet serendipity! one question - i notice that a lot of your recipes have chopped garlic rather than crushed. is there any reason for this apart from just personal style?

this soup is very interesting! I like the garlic taste and the idea to use it in this way is really wonderful kiss fra

This looks delicious and very unique. I have tried the garlic soup recipe over at Epicurious which contains 40+ cloves of garlic but, somehow, in the soup, it doesn't feel overpowering at all. This sounds a bit more light so I can't wait to try it!

Garlic is such a healthy food, and roasted with a little bit olive oil it releases a beautiful taste. Thanks for the one more way of consuming it. Greetings from The Kitchen of Oz.

I made a garlic soup recipe from Julia C.'s cookbook not too long ago and was worried with the results until the egg yolk concoction was added..."binding pommade" as you put it. Then everything came together. I can't wait to try this one!

This soup looks so divinely comforting for chilly fall evenings!

This looks so good! I've always been intrigued by garlic soup recipes but never tried any, maybe because my boyfriend routinely accuses me of being "obsessed with garlic". Your description of this being round and mild might convince him, though!