Skip to content
Plovs. I started cooking them last year pretty regularly, locking onto one in particular early in my exploration. It was the Green-herbed Plov with Chickpeas in the Samarkand cookbook by Caroline Eden and Eleanor Ford. It is the lone vegetarian plov recipe they included in that book, because, as noted, it's hard to find a plov in Central Asia without meat as its central component. If you love robust one-pot rice dishes, and you own an Instant Pot, you're going to want to dig in here, this plov recipe is for you. 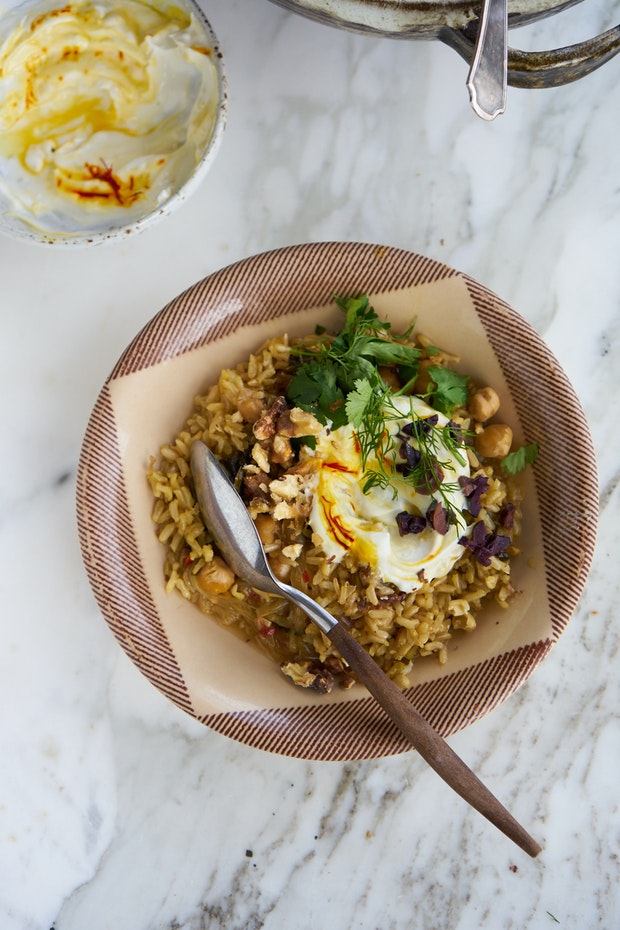 If you've never experienced a plov, its heralded as "the undisputed king" of Uzbek cuisine, a steaming pilaf cooked in layers, served everywhere in Central Asia. Think of plovs as the perfect all-in-one-pot preparation, and this is the version you'll want to start with if you're vegetarian or vegan. It has rice, and chickpeas, fragrant spices, spinach, herbs, saffron, garlic, and olives. It's the epitome of family style - served on platters, for visitors, for celebrations, for holidays. 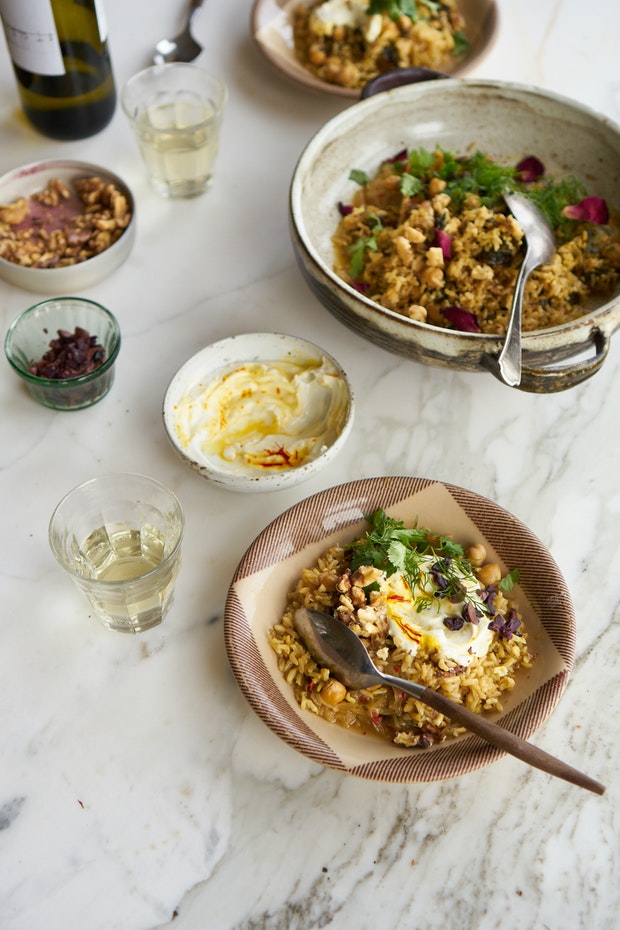 In the beginning I was cooking my plovs in a big cast iron Dutch oven, but quickly moved on to a kamado-san rice cooker donabe. I won't do the donabe deep-dive here, but nailing a plov in a kamado-san donabe, consistently (keyword), is master class stuff. Which is why I thought this recipe would never make it onto the site, it was one for the personal collection ;). To cook plovs in the donabe isn't for the faint of heart, and for every three times I nailed it, there was one time I really didn't. And then(!)....then I bought the Instant Pot, and decided to try my plov in that. Guess what? SO much more consistent, likely because there's no variation in temperature and heat from one attempt to the next in the IP. The results are great, and relatively predictable. So here we are - an Instant Pot Plov. Give it a go! It's great day after as well.

For reference, this is the Instant Pot I used for this recipe: Instant Pot DUO Plus 6 Qt 9-in-1
101 Cookbooks Membership

A couple of notes. First, when I say to layer, I mean like you would layer a taco dip or a lasagna. Spinach, note that I've tested with fresh and frozen spinach - both work great, and the frozen allows you to always have it on hand, pre-prepped and ready to go.

Inspired by the Green-herbed Plov with Chickpeas in Samarkand: Recipes & Stories from Central Asia & The Caucasus by Caroline Eden & Eleanor Ford. Kyle Books (2016) 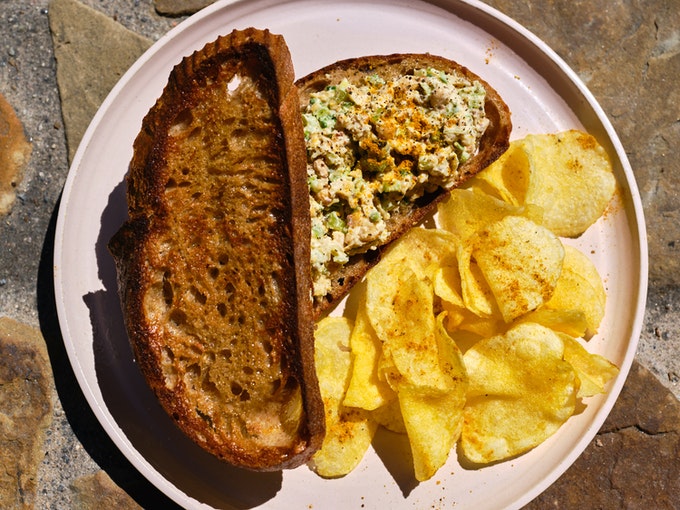 The chickpea salad sandwich filling to make in bulk for easy lunches and snacks all week. A perfect vegetarian or vegan sandwich option. 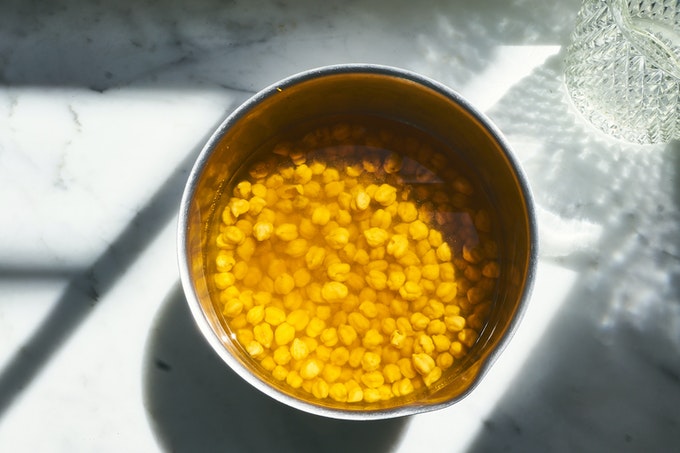 Turmeric soaked chickpeas, you can use them in all sorts of things! This includes your favorite hummus, salads, and chickpea creations. I include conventional stovetop and Instant Pot instructions here.

Hi Heidi, This looks delicious! Any tips on how to modify for those of us who still don't have an Instant Pot? i was thinking along the lines of a Dutch Oven and then sticking into the oven?

HS: I have done a lot of plovs in a Dutch oven on the stovetop - it just takes more finesse and attention. Ride the heat so the rice cooks, but not so hot that the bottom burns/scorches...

Extremely delicious. I topped with a little crumbled feta and pistachios. Thanks for the recipe!

This is probably a silly question, but what kind of olives? Cured black (i.e. not regular canned black olives)?

HS: Exactly! Either oil-cured, or Kalamatas, essentially, anything that doesn't come from the can...

An absolutely great and creative recipe! I had never heard of a plov but was inspired by your ingredients and use of Instant Pot. Made it earlier this week following recipe except using homemade veggie stock instead of water and no saffron. It was wonderful immediately and as leftovers. The flavor of the stock was detectable and delicious. Will use stock again and plan to try it with. soaked but not cooked dry Rancho Gordo beans. Will look for beans that cook about same time as rice. I think this recipe will adapt well to different veggies, beans and rice. Thanks so much, Heidi, for a novel and healthy recipe that’s perfect for the IP.

HS: Thanks for the nice note Anne! And, yes! Use this as a jumping off point, now that you nailed the idea, you can totally switch it up to your liking :)!

This looks delicious! What type of black olives do you recommend?

This looks delicious. Any thoughts on using lentils instead of chickpeas (it's all i have right now). Probably would have to increase the water a bit? I am thinking about something mujadarrah like...

HS: Yes, I think it could work brilliantly!

Long time lurker, but had to comment as this dish was amazing. The salted yogurt really puts it over the top. I am embarrassed by how quickly my husband and I finished this off! I've had a ton of success with your recipes, but this has earned a spot in our weekly rotation. Thanks for the quality content you continually put out there!

Thank you, thank you for this incredible recipe. Just finished our dinner with plov. And I love it so much. I’m from Russia and we cook plov pretty often. I’ve got a lot of special plov spices at home. I added only one additional ingredients to the base. It was cumin. This spice is always use in plov with onion and carrot. And cumin is one of my fav spices. I used soaked garbanzo beans (soaked 1 cup of them nearly 6 hours in boiled water) and increase water to 4 cups.

HS: Thanks for the tip Anastasia! I'll add some cumin too next time. xx!

We tried this last night, but messed up and using white basmati rice instead of brown. It was a bit mushy, but the spinach and chickpeas worked well together.

Any ideas how this might translate to an old-fashioned stovetop pressure cooker ? I might want to buy an instant pot - I'm a sucker for gadgets - but I'm certainly not going to in our current tiny crowded kitchen. I'd be worried about over cooking the rice or indeed the whole thing.

Sounds delicious! I don’t have an instant pot, but would love to try this. You mentioned you’ve made it in a cast iron Dutch oven in the past, any advice on how to do so successfully?

Hi Heidi! Can't wait to try but if I only have medium grain brown rice, can that be substituted for the brown basmati rice? Thanks in advance!

Heidi, You are knocking it out of the ball park with these IP recipes !!! Thank you, I am grateful of you! Love from Upper Haight

HS: Thanks Margaret! Say hello if you see up there! xx.

Could you make this without the instant pot?

HS: Hi Ann - You can, it's just a little more nuanced. You simmer until a lot of the liquid has boiled off, and then you cover with a lid, and steam until the rice is cooked.

Got an instant pot for Christmas. This looks like a terrific starting recipe for me, but I also got a 10 pound sack of WHITE Basmati rice. Cooking time reduction suggestion?

since you're using the instant pot, have you tried this with dried beans? Obviously timing would have to be adjusted if the beans were just soaked, partially or totally pre-cooked

HS: I haven't tested that, but let us know if you do!

What is cooking time for a Dutch oven? I might be wrong, but it seems everything else would be pretty much the same. Thank you!!

This looks delicious! I’ve never heard of Plov. I’m excited to get an IP soon and will try this for sure!

No IP in my kitchen, but I’d love to make this. Any suggestions? BTW, I frequently make your soup with red and yellow split peas. It’s a favorite around here.

I am from Pakistan and I grew up eating chickpea rice and vegetable rice. But everything else pretty much was meat based lol. Back home the pulao word is reserved for the yakhni pulao. My mom makes the yummiest food and although I cook pakistani food all the time it never tastes like ammi's. When she visits she takes over cooking and my boys are complimenting her all the time. She cooks chickpea rice with the onions and tomato base and uses a mixture of yogurt and milk to flavor the broth along with salt and a bit of red chilli powder. So simple yet super yummy. And if you ever tasted her meat yakhni pulao, you'd be in pulao heaven.☺I never use IP for rice though..seems more work than stove top. Have tried your recipes over the years and love how flavorful they are.

HS: Thanks for the nice note Samina! The tomato base you refer to sounds amazing. xx!