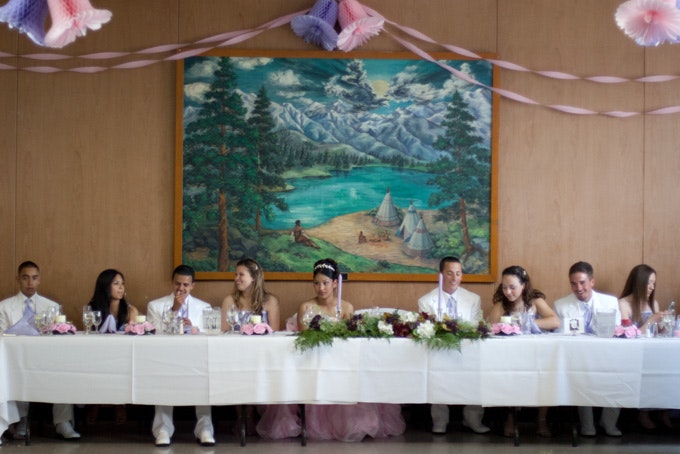 My friend's niece Elba had her Quinceañera, or Quince Años last weekend marking her fifteenth birthday. The celebration is a big deal in many Latin families marking the transition from childhood to womanhood - similar in spirit to a bat mitzvah or sweet-sixteen. In this case the Quinceañera took place in the context of the church and family, and (like many great celebrations) the tears and smiles, reflections and dancing, pageantry and proud parents were set off by a backdrop of glitter and taffeta. I thought I'd share some of the photographs. A mile of pink taffeta

It was a special day for Elba, made so by family members and friends who all took active roles in the preparations, ceremony, and party. Throughout the day she was flanked by a court of fifteen friends who now carry the (official) responsibility, along with her family, of guiding her and offering support. I say official because there was a point in the mass where the priest looked over to her friends and made them pledge their commitment - a little more serious than signing BFF in a yearbook. In the weeks leading up to the big day Elba's grandmother made her bubble-gum-pink princess gown from scratch, as well as lilac-colored floor-length dress for each of the female escorts. They fit perfectly and it was hard to believe they weren't store bought. Bodice detail of one of the escort dresses

Months of rehearsals led up to the performance of a number of traditional waltzes. There was a big build up to the group waltz, and the dancers all looked a bit nervous before they settled into the routine. There wasn't a dry eye in the room during Elba's dance with her father (lead photograph). The d.j. was eventually let loose to play more contemporary tracks and many of the girls traded in their pretty dresses for well worn jeans and tank tops. It was interesting to see the blend of contemporary culture with tradition. The escorts were transported from the church to the banquet hall in a long, white truck-limo tricked out with a booming-sound system and pop-down LCD television screens. Cellphones were never far from sight at the long banquet table that was ground-zero for Elba and her escorts - the girls in particular seemed to be busy text-messaging throughout the day. Elba and her escorts. Click here to see the full, higher-res photo.

And then along similar lines, there was the cake. A multi-tiered white cake with sugar-sweet frosting an inch deep or more. To top it Elba worked with her grandma to make a dress for the Barbie that matched her own. The Quinceañera was an all day affair, and this is just a small glimpse through a handful of pictures. I hope to share more, in greater detail, at some point. Thank you Jaime for inviting me.

Oh my god! You're friend's niece looks so pretty and amazingly dressed. Is the cake a model of that girl, just wondering. The hair and that hair jewelry is very beautiful.

what a lovely celebration. thank you for giving us a peek at this cultural "milestone".

What a wonderful antidote to the disgusting Sweet Sixteens on TV. That gorgeous confection of a dress is a testament to her Grandmother's love. Thank you for sharing her story.

Feliz Cumpleanos! I hope you had a wonderful 16th birthday! The photos are great and I am sure the celebration was beautiful like the birthday girl. Hasta Luego! :)

Wonderful photographs! Thanks for sharing these - it looks like elegant event!

Beautiful photos Heidi! fun to view--Thanks. the pageantry...Jaime's niece is (not surprisingly) gorgeous and the handmade gowns are lovely...funny you mentioned flickr and then coincidentally the next day I got corralled in--funny too all of the activity with heads bent messaging etc is now a standard in photos for awhile...

Wow.. Grandma is so talanted. From a former minor seamstress I can't stop drooling over that detail. She's a beautiful young lady, you did a great job taking photos. This is such a great glimps into other's lives. Please do share if there's specific foods attached to the event...

{You ARE Worthy. btw} I am such a fan of your thumbprint photos. Intimate and sharp, colorful and quiet, personal and painterly.

It really is a wonderful tradition and the pictures are fantastic. I envy the culture. Everyone looked lovely. :)

I remember my friend had her quinceañera last year, and her family drove all the way to Mexico for it, while they let her take an airplane right down to California where they'd pick her up. It makes me wish I had had one, even though I'm not Catholic or Hispanic . . . it's such a wonderful tradition! Your photographs are great and really capture the elegance of the event. =)

What wonderful photos! Thanks for sharing such a special celebration with everyone. She is a beautiful girl and it looks like everyone had a great time!

What a lovely post - thanks for giving us all a glimpse of the celebrations.

your pictures are amazing. thanks for sharing

Heidi - Your photos are fantastic! I was looking at your Flickr albums, and the ones of parades and processions are wonderful, not to mention the ones in your blog. I just set up my own little So Cal blog at aliceqfoodie.blogspot.com. Please stop by and visit! Cheers!

Such a lovely post, Heidi! Looking forward to seeing more of your beautiful pictures from the wonderful event.

what a great, wonderful, fun event, finished off by the perfect cake topper!

What lovely photographs for such a special day in this young woman's life. Thank you for sharing.

I just signed up for the newsletter yesterday and I couldn't be more happy. Thank you for sharing this! Does anyone know if there is a special meal or dish that goes along with this cultural celebration?

How lovely! The method of photography really captures the details of the day nicely. On a side not the new (ish?) texture on the side bars makes it rather hard to read the text. I like that it looks like a waffled dish towel, but it eats the text up.