This vanilla mashed sweet potato recipe has been cast in a regular role on our Thanksgiving table, but is great the rest of the season as well. I'll take this version over the one showered with marshmallows any day. Here's what you're in for: plump vanilla beans, cream, orange zest, and butter combined with sweet potatoes that have been roasted in the oven until they develop a beautiful, rich, flavor-concentrated flesh. A quick whirl in the food processor produces a smooth, creamy, subtly sweet puree haunted by the delicious vanilla and citrus undertones. The consistency was that of a thick frosting. You can also use the puree as a base for other recipes:

- thin it out with some vegetable stock for an autumn soup.
- add an egg or two, maybe some grated cheese for a tart filling.
- yum. Sweet potato raviolis.
- wrapped in phyllo or puff pastry dough.

The recipe comes from a new cookbook - Artisanal Cooking by Terrance Brennan. There are a couple other recipes from his book that I look forward to trying - Chestnut Spaetzle, Apple Tarte Tatin with Cheddar Cheese Crust, and also a Cauliflower Soup with Cheddar Croutons.

I topped the sweet potatoes with the Autumn Spice Oil (also in the book). A bunch of spices including juniper berries, cardamom, star anise, cinnamon, cloves - toasted, freshly ground, and bathed in warm oil. I hope you enjoy this one as much as we have!

Preheat the oven to 350F. Put the potatoes on a baking sheet and bake in the oven until tender to a fork tip, about 1 hour. Remove from oven and let cook until warm enough to handle, 10 to 15 minutes. Peel and discard the skin. Put the potatoes in the bowl of a food processor fitted with the steel blade.

Meanwhile, pour the cream into a 2-quart pot, add the vanilla bean and orange zest, if using, and set it over medium heat. Bring to a simmer and cook for 5 minutes. Remove from heat. Use tongs to fish out and discard the vanilla bean. Pour the mixture over the potatoes in the processor and add the butter.

Puree the potato mixture until smooth. Season with salt and 4 grinds of pepper, or to taste. Keep covered and warm until ready to serve.

(heidi note: I think there is an ingredient omission in this recipe. The ingredient list leaves out the amount of oil to use. So, based on the other infused oils in this book I used the same amount, 1 cup.)

Put the star anise, juniper berries, cardamom, allspice, cinnamon, and cloves in an 8-inch saute pan and toast overmedium heat, shaking constantly, until fragrant, 2 to 3 minutes. Remove the pan from the heat and let cool.

Transfer the spices to a spice or coffee grinder and pulse for a few seconds.

Transfer the spices to a bowl, add the vanilla bean and orange peel, if using, and set aside.

Pour the oil into a small pot and heat it over medium-low heat until warm. Pour the oil over the spices and vanilla. Cover and let infuse at room temperature for 24 hours, periodically mixing the bowl. (heidi note: terrance says not to strain, but i strained anyways at this point - I think my spices were a bit on the chunky side of a fine grind).

Cover and keep at room temperature for up to 2 weeks or refrigerate for up to 1 month. 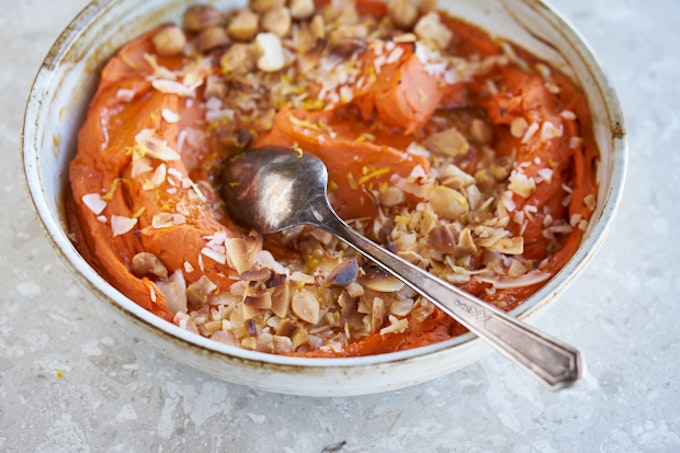 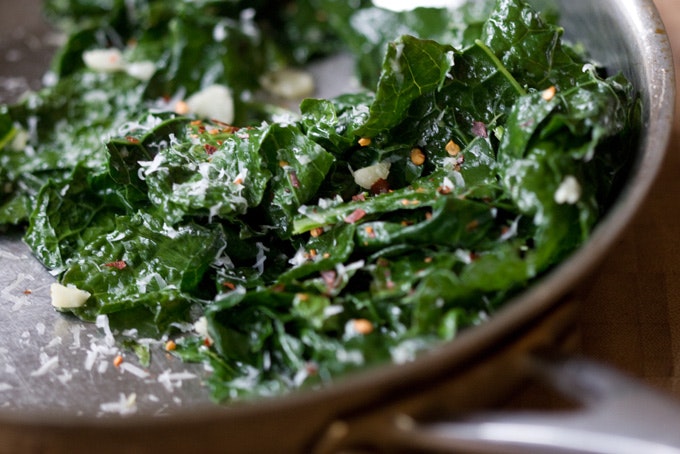 If you love sauteed greens, give this recipe a go. I avoid overcooking, and throw plenty of garlic into the pan. You can use kale, chard, or spinach.

The sweet potato dish sounds wonderful, but I'm wondering about the Autumn Spice Oil, what do you use it for?

Yum that sounds so good! Would this work if you replaced the cream with evaporated milk? (i'm trying to think of how to lighten the recipe a bit)

I want to try this recipe it sounds really good.

This is so unbelievably good! Not just "wow, that's good", but "wow, I could eat that every day for the rest of my life" good. HUGE hit at our party, and made an awesome soup the next day. Thanks so much!

Heidi, I made this for a very veggie Thanksgiving this year and it was fantastic. The colour itself was out of this world. Loved it!

Heidi, I tried this with roasted butternut squash, and it was tremendous. In fact, so good that I put it on my weekly round--up of the best gluten-free recipes on the web. I'm certain thousands of us will be making this for Thanksgiving!

Thinking this would make a great base for a souffle! Looking forward to trying it. Love the photos...

I tried this recipe tonight - added a bit of cinnamon and used orange juice instead of zest. It was delicious! Hubby said it tasted like ice cream. It's all I can do not to pull out the 'Nilla Wafers and use the left overs as a dip! This was my first exposure to your wonderful site, and I am looking forward to exploring and trying more recipes! Thanks!

Ya know, a bit of crumbled spiced/candied pecan and a drizzle of maple surup woul dmake that puree even more decadent! I need to make that one for sure. Thanks for posting it!

I still have leftover sweet potato mash from Thanksgiving this past weekend but this recipe sounds so good that I'm going to have to try it anyway!

One of the last, and very strange, desserts i experimented with at Citizen cake is a "mousse" of white Japanese sweet potato at it's base. I was obsessed with all those intriguing textures, colours and sweet tastes. Your recipe and photograph make me want to start that private journey all over again...

I am experimenting with souffles lately as I am teaching myself to cook -- I have made carrot and pumpkin souffles so far and I was wondering if this could be used as a souffle base as well.

Yummm! I love sweet potatoes and am always looking for a new and delicious way to enjoy them. Thanks!

This looks gorgeous. Of course. It's yours. I adore whole vanilla beans. Try them in a simple fruit salad, and it all tastes far more gourmet. Do you think this would work with butternut squash? I have some roasted at home....

Since I do make sweet potatoes for a baby with frequency, I have done some experimenting with them. I don't think baking is required. Cubing and steaming them also readies them for pureeing and they come out the same. For the rich and lazy, Whole Foods sells pre-diced organic sweet potatoes in the frozen vegetable section and Trader Joes sells them pre-diced in a 1 lb bag refridgerated. Same could be done with butternut squash (Trader Joes sells bags pre-diced from Sept to Dec and Whole Foods has them next to the frozen sweet potato cubes)

Wow, that sounds amazing. i also found amazing the idea of using it as ravioli filling. I will definitely give it a go.

Using the puree in ravioli sounds divine. I had a wedding shower today and got LOTS of gadgets - can't wait to try this and several other recipes you've posted. Thanks!

Vanilla sweet potato puree sounds great -- can't wait to try it tonight -- but wondering about how much orange zest you use (1 tsp?) as I don't see it in the recipe. Thanks.

I'm a huge fan of fall and love all the orange dishes I get to enjoy now from sweet potatoes to pumpkins. Just had a fabulous pumpkin puree out at a restaurant in CT the other week, I think I'm going to have to try this puree you've posted here. Great picture!

Heidi, this recipe sounds super. I have been really into using vanilla beans in savory dishes lately. You always think of vanilla in custards, frostings, and other sweet items, but the perfume is lovely in heartier dishes as well.