Dipping your toe into the vast culinary pond can be intimidating. People start by testing the waters with easy, party-type fare like salsas, spreads, and simple-to-prepare dips like hummus. Along with being easy to make, hummus is also a great example of what I'll call a gateway recipe. Gateway recipes can lead to an intense desire to tackle other recipes - each more hard-core than the last. Start making hummus, and before you know it you're neck-deep in tagines and Paula Wolfert cookbooks.

The foundation for hummus is the pug-looking, nutty-tasting chickpea. Add tahini, lemon juice, olive oil, fresh garlic, salt, and a few hundred laps around the inside of a blender - you've got a batch of this middle-eastern classic. I love hummus. I love garbanzo beans -but I can't help but look for fresh twists on both.

My friend gave me a copy of Judith Barrett's Fagioli cookbook. For those of you who have witnessed my bean buying patterns in person, you know this addition to my library is long overdue. The book focuses on the bean cuisine of Italy and delves into Ital-centric preparations of fava, cannellini, borlotti, and chickpeas (ceci), among others. There are some great recipes, and techniques in this book - one recipe in particular caught my attention - Whipped Chickpea and Potato Spread for Crostini - a whipped chickpea 'hummus' of sorts. Judith purees chickpeas with a cooked new potato, a bit of red onion, olive oil, and seasonings. Think of it as Italian-style hummus. Sounds good, right? I made her version and decided to build on it for my second batch. I added lemon zest, a spike of lemon juice, and a generous dose of one of my favorite power greens, Spinach. I also kissed the crostini with a bit of garlic. The green chives got a bit lost on top of the spinach chickpea whip. Next time I'll go back to garnishing with pretty slivers of red onions.

A remix of Judith Barrett's version - Fagioli, page 36. hs note:I like the taste and texture of beans cooked from scratch, but I don't see why you couldn't make this using canned chickpeas. Start with two 14-ounce cans, drained and rinsed. Cook the potato on its own. This should get you in the ballpark.

Prepare beans and potato:
Soak the garbanzos overnight. Drain soaking liquid, and refill with enough water to cover the beans by about an inch. Bring water to a boil, reduce heat, and allow to simmer until beans are tender. Add the potato to the pot (or cook it in another water-filled) until tender, another 10 minutes or so. Drain any extra water at this point and set beans/potato aside.

Make crostini:
Preheat oven to 350. In a large bowl toss the baguette slices with the olive oil and salt. Arrange in a single layer on a baking sheet and place in the oven until golden, about 10 minutes. Remove from oven, let cool for a couple minutes and rub each crostini with the clove of garlic - don't go overbboard, raw garlic is strong!

Add a splash of olive oil to a hot skillet, and throw in the spinach. It should collapse within 10 or 20 seconds. Immediately remove from heat and salt to taste.

Combine the chickpeas, potato, spinach, 1/4 cup red onions, lemon zest and juice, and a few big pinches of salt in a food processor. With the machine running drizzle in the olive oil. Chances are your mixture is on the dry side at this point and you may need to add warm water a few tablespoons at a time until the spread is a rich, creamy consistency. Season carefully, if you under salt the flavor will be flat. If you need more acidity, and a bit more lemon juice.

Put a spoonful of the spread on each crostini. Finish with a drizzle of good-quality extra-virgin olive oil, and a sprinkling of the red onions. 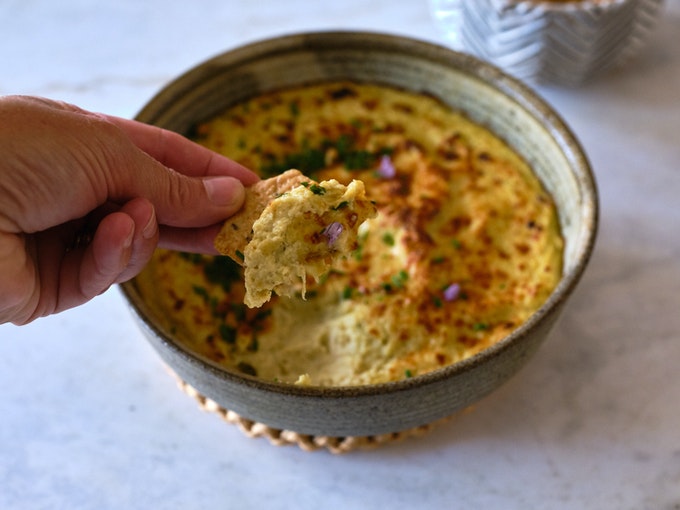 This simple artichoke dip hits all the crowd-pleasing notes of the classic version, but cuts way back on the mayo-bomb aspect. And guess what? No-one can tell the difference. I still use a bit of mayo, but incorporate some silken tofu and greek yogurt. 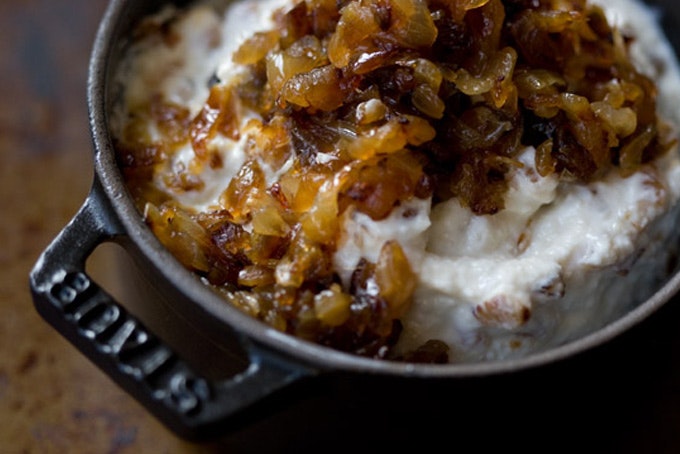 A grown-up remake of the onion dip I loved as a kid. This one features lots of deeply caramelized onions, sour cream and Greek yogurt. 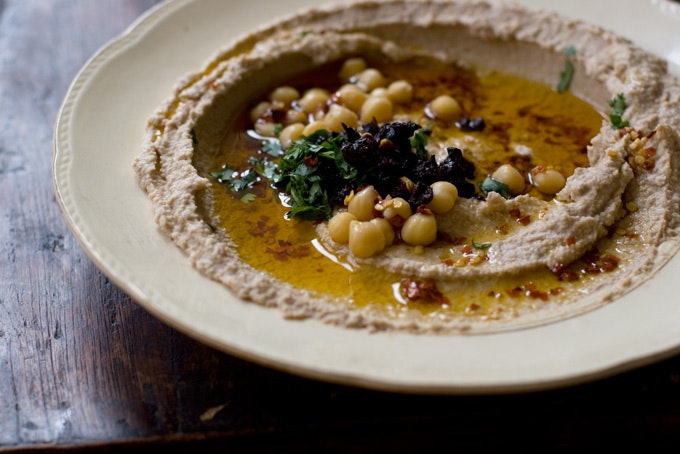 p.s. It's really cool to see such an international contingent weighing in on the comments today. Welcome!

Hi Bruno, In general, right? Not in relation to any specific shot? For those of you who aren't in the know when it comes to photo-terms, he means depth-of-field. Many of the shots on 101 cookbooks have a shallow depth of field where the item drops out of focus quickly. The short answer is, I like the look of it in relation to the design of this site. Shallow DOF shots are soft, often pretty and not overly literal. The photos run quite small...so I think it helps to lead the viewers eye to the point of focus. A lot of my non-food shots are not in the shallow DOF style. And food shots that I don't use on this site tend to have more depth of field. Just depends on what I'm shooting and where the shot is going to be used. I think much of the time the food and environment lets you know how it wants to be shot. You can see a broader range here: http://www.heidiswanson.com/ And non-food snapshots here. http://www.flickr.com/photos/40732538209@N01/sets/72057594086622195/ http://www.flickr.com/photos/40732538209@N01/sets/72057594086558084/ Thanks for the question Bruno, -h

Here in Egypt we use whole chickpeas with Koshary, we also soak it in water overnight, get rid of the soaking water and cover the chickpeas in fresh water. boil it till tenderness then add shredded garlic, cumin, lemon juice & hot sauce for a hot (soup,drink) called (Halabessa) great in the cold winter evenings.

i have done a similar version with artichokes and white beans along with the chick peas. and since i am not a big tahini fan i usually only use a small dollop. the spinach one looks amazing. can't wait to try it. thanks for your great web site!

Hi there again Heidi, Just wanted to ask you why did you stick with a narrow DOF instead of a larger one... Just personal preference or what???(I think I would have used one large enough just to have all the object in focus... =/ ... wanted to understand how you 'thought' about the image while shotting) I understand you can't reply to everyone but I sincerly hope you'll have the time to awnser my question...(also that you can uderstand what my 'bad english' wrote =) ..) ...tnx!!

I love the hummus on crostini idea. My personal twist on hummus is lime & jalapeno. And you are right. It's the perfect gateway recipe!

I made hummus the other day and added a few red peppers- not sure what they're called- like red, orange and yellow bell peppers but smaller and sweeter- and it gave my hummus a gorgeous pink-orange color and a delicious sweet flavor.

I know what you mean by the gateway recipe. I started with hummus and have advanced to a few other Arabic dishes. I should try this twist on hummus with my leftover tahini.

I know what you mean by the gateway recipe. I started with hummus and have advanced to a few other Arabic dishes. I should try this twist on hummus with my leftover tahini.

Good catch J Jacob - serves me right for trying to list off the ingredients from memory. Will update the post. Shuna! I've had that magazine by my bed for over a week now without paging through it. Maybe the hummus vibes were seeping into my thoughts through osmosis as I slept. I wrote about the fresh garbanzos a few years ago. I boiled them like edamame (seemed logical) Then someone in the comments recommended roasting them like chestnuts. http://www.101cookbooks.com/archives/000034.html

Being from the Middel East, and very familar with hummus, the absolutely necessary ingredient that was not mentioned is a spoonfull of FRESHLY crushed garlic. Thank you.

I too have a thing about hummus. It's simply great tasting & I eat it, spread over rare beef steak or lamb shoulder among other things. I never thought of accessorising it with greens. I'll give it a try this weekend. Thanks for the idea.

Wonderful treasure of very interesting and delightful recipes. Thanks for the same

I got such grief the other day from a purist who shall remain nameless, for calling my blend of chickpeas, subtle spices, garlic, olive oil and my own homemade preserved meyer lemons a 'hummus', that I had to rechrhristen it "chickpea dip"

These ideas are perfectly timed for my daughter and I - we made falafel last night - and we were wondering what else we could make with chickpeas. By the way, I love your description - "pug-looking" - that is exactly how they look! My daughter has complained that in a salad or other recipe where the chickpeas aren't mashed or pureed, that she hates the skin of the chickpea. I had never even noticed it before; now she has me skinning her chickpeas - can you imagine? I would love to know if anyone else does this.

You can roast the whole branch of chickpeas on the barbecue, you can also cook like a vegetable. In India they are called harbara

Gateway recipe. I like that. Might have you seen the article on hummus in Saveur? If you have not you will get a little chuckle from your own post... A little tired of chickpeas by now, I am a fan of making something similar with dried peeled Favas-- which, btw, can only be found at Berkeley Bowl. Also-- I hope you'll report on Short Night's Fresh chickpeas once they show up at the market! I've always wondered what people do with those...

Hi Heidi, love your site, always fresh and funky. I am also a chickpea fan, am currently living in the middle east and must say the food is superb, big hummus fan. I blend eggplant roasted with loads of garlic with chickpeas, tahini etc, it's great served instead of mash, or you could just eat it out of the bowl!!!!