Today for lunch instead of making a regular panini I decided to try making panini batons. One-inch wide slabs of toasted, cheesy, heirloom tomato filled deliciousness slathered with a basil-chive ricotta spread. I figured by cutting them just one-inch wide they would be easier to eat (one handed!) and maybe they could make a nice addition to an appetizer plate at some point. If you were wondering where the inspiration came from, here's the story...

Over the past year, as I've been developing recipes for my next cookbook, a couple themes have emerged. One involves the way you cut ingredients. I've found that one of the ways you can breathe new life into an ingredient you've grown tired of is to think about new ways to approach it with a knife. It's sort of stating the obvious but I'll say it anyway - by changing the cut and shape of an ingredient you impact its cooking time, texture, mouth feel, and appearance.

You can do it on the ingredient level. Choose an ingredient that you like but are perhaps bored with and then make a list of ten ways (or more) that you can take a knife or sharp object to it. Here are a few ideas to get the juices flowing - mince, chop, dice, slice, sliver, grate, snip, score, or shred. Then think about what you can do with it the ingredient in that form. Ever shred a cherry on a box grater? I haven't, but now I'm thinking about it. You can also do it at the serving and plating level. Change up shapes, use cutters, play with varying sizes and take traditional, everyday preparations out of the realm of the obvious and expected. Have fun!

Headnotes: Add and egg or two to the ricotta spread (make a double batch) and you have a delicious addition to your next lasagne on your hands. As is, it makes a nice cracker or crostini spread or ravioli filling as well. You can make the ricotta spread ahead of time.

Also, I've retired the panini maker for now and have recently been putting sandwiches in my big skillet and weighing them down with the lid from my heaviest Le Creuset pot. The pressure goes straight down so you don't end up with the tops pushed off the panini - this always happens to me with my panini machine. Lastly, I don't cook the tomatoes along with the rest of the sandwich because I like them to keep their structure.

Make the basil-chive ricotta spread by combining the garlic, olive oil, ricotta, basil, chives, and salt in a food processor until mixture turns pale green, about 15-20 seconds. Set aside.

Cut the slab of bread into one-inch thick strips and then in half horizontally so that each strip can be made into a sandwich baton. Sometimes there is too much bread going on in the middle and I'll thin it out by trimming it closer to the crust on both sides.

Drain the mozzerella on a paper towel and season with a few pinches of salt and freshly ground pepper. Slice into 1/4-inch thick rounds. The mozzerella should go on the bread without much overhang, so cut each round in half if needed.

Drizzle the tomato slices with a bit of olive oil.

To assemble each panini, slather both the tops and bottoms of each bread baton with the basil-chive spread and then add a few pieces of mozzerella. Put the tops on and place in a skillet (see above) over medium heat or in your panini maker. Cook until the cheese is nice and oozy.

Remove from the pan open each baton and add a few sliced tomatoes. Close up and enjoy. 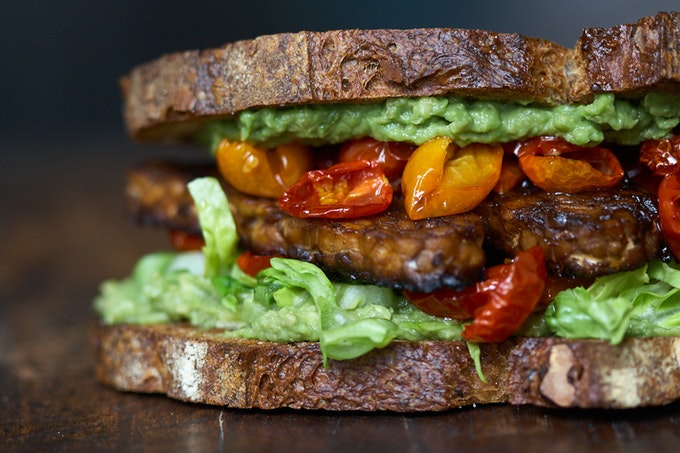 A vegetarian TLT sandwich inspired by the classic BLT sandwich. This version includes chipotle-marinated tempeh alongside oven-roasted cherry tomatoes, a bit of shredded lettuce, and a generous avocado slather on a thin slice (or two) of great bread. 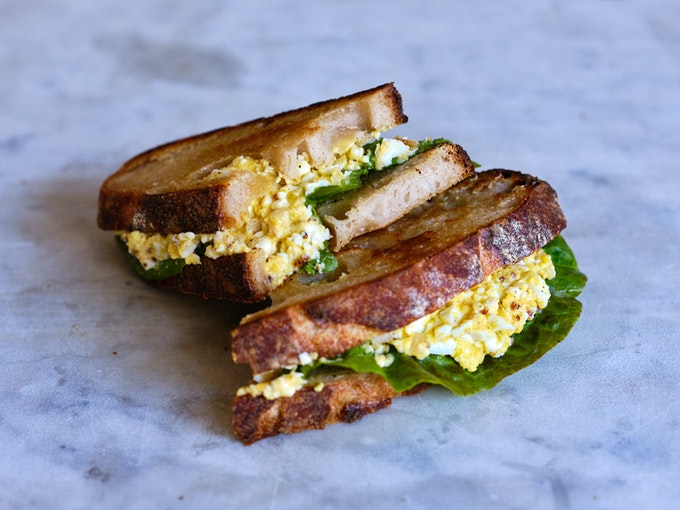 The perfect egg salad sandwich is all about the little tweaks and a smart ratio of eggs to other ingredients. This is my favorite. Served on garlic-rubbed toasted bread with chopped celery, onion, and whole-grain mustard.

I'm in total agreement on the panini maker. A skillet and something heavy work just as well. These little batons sound and look fantastic and I love the idea of the ricotta basil spread. They would be lovely as a nibblie at a cocktail party.

Good thing it is summer and I have tomatoes and basil in my garden - thanks for the great recipe.

On one snowy cold Wisconsin day in the mid 1960's my mother set up our play table for lunch in the living room (unheard of!) and made open-face peanut butter sandwiches. The reason they were so especially delicious was that she cut them in four small squares and placed 5 raisins on each them!

This sounds delicious but I am a little more of a veg-head so I would add spinach to my ricotta spread. I think it would be awesome for homemade ravioli like you said. De-lish!

Wow, i can't wait to see your new book. And these pictures are absolutely gorgeous! Fanny

Heidi, boy does that look good! I'm on a semi-low carb plan right now and I can't have the cheese (protein) with the carbs (bread) - I'l have to give it a go when I am cheating a bit. I still have 3 lb to go. I love grilled cheese sammies of all kinds. I have been known to make grilled mozz with chiles, or grilled cheese with tomatoes, or onions, or garlic, or smoked garlic, oh you name it - I've put it between bread - mozz and pesto are my favorite. I even wrote it into Kitchen Garden Magazine (now called Kitchen Gardener) - and they published it - years ago. Anyway, it is delicious. That picture has put weight on me! I agree that the way you cut things, or make them look, makes a difference on flavor and on how you feel about it. I'll try cutting my grilled cheese (or panini) into strips. What an idea!

I am drooling just looking at photos! What a novel idea!

hey sandra -- inch wide batons eaten one handed doesn't work for you eh? maybe you need to work on that.

Sounds like a great recipe. It's a shame that you did not include any photos that really showed the size and structure of the batons so that your readers could have pictures what you meant. Instead your photos look like a super close up of a random, whatever sandwich slice. Need to work on that!

Wow, that basic-chive ricotta spread looks delicious! And so easy! I'll definitely remember it. I myself can’t think of one ingredient in particular, which I’m already tired of. (yet of course, I’m just starting...) but I will absolutely keep this "fresh approach to ingredients list" in mind. Very versatile! Great!

omg, that looks good. all that melty ooey gooey cheese, juicy tomatoes, and soft but crispy bread. I'll have sweet dreams about this sandwich (then i'll wake up hungry!)

all those ingredients grilled on a sandwich qualify as bliss for me. sure my t-buds travel all over the place with food but they always come back to luscious, unctuous cheese- melty, oozey, gooey. and the tomato - a perfect foil. ahh... you have magnified and expanded the joy for me!

Wow, now I'm hungry. I don't like warm tomatos (so placing them on a warm sandwich may not be my thing) but it still looks yummy.

your whole blog is an inspiration....and this baton is a keeper.....the ideas spinning in my head. thanks

Good golly! my tomatoes better ripen soon, I have got to try this, looks delish!

I find not only shape of an ingredient but dishes and presentation send a fresh view to an old ingredient. In winter and Brussels sprout season I often ponder to chiffonade or to serve them whole...Then there is the mashed potato delimma- to use the ricer, leave the skins on and mash with my meat bat, or the old hand held electric mixer. Needless to say from store to plate there is a lot to ponder!

You've got me brainstorming... There is so much truth to what you're saying - thanks for the inspiration!

Hello, I just started reading your blog. I love your pictures and this one just looks good enough to eat!

Here at the Fish Creek House Bed and Breakfast in Montana, we often make make some hearty sandwiches for "fisherman lunches" and other guests to fuel them for their adventures of the day. Might have to add this one to the repertoire! Thanks