Today's edamame soup recipe comes from a delightful new cookbook by London-based Charlotte Hume - The Great Big Veg Challenge - a book my mom (and parents of all picky eaters) could have benefited from. It stems from a blog of the same name, inspired by her son, a vigilant seven-year-old vegetable hater by the name of Freddie. 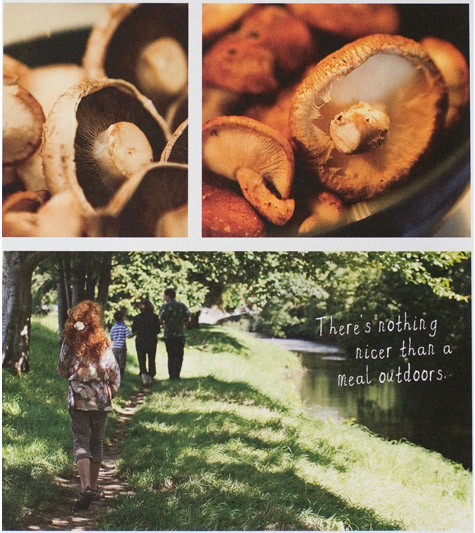 Aside from corn and potatoes, Freddie won't eat vegetables. One evening, desperate, Charlotte signs up for a blog. Her idea was to take Freddie on an A to Z tour of the veg-kingdom, hoping the site would serve as a forum for inspiration and support. She starts off by opening the site up to...

"...all of you parents out there who have tried and succeeded to introduce your offspring to the joys of carrots, peas, lettuce, spinach, asparagus, beetroot, green beans - in fact any vegetable. Any ideas gratefully received."

Flash forward through L,M,N,O,P, and the transformation of a fussy eater. It's a great story, and now the blog has led to the lovely, newly released soft back cookbook sitting here in front of me. It's a beautifully photographed and illustrated extension of the web-site that started it all. Unfortunately, it looks like The Great Big Veg Challenge is only available for through Amazon.uk at this point, but I suspect at some point it will be available domestically in the U.S. and I'll update this page at that point.

The book is packed with very approachable and appetizing recipes. We work our way from artichoke, asparagus, and aubergine onto broad beans, broccoli, and brussels sprouts all the way though watercress, yams, and zucchini. 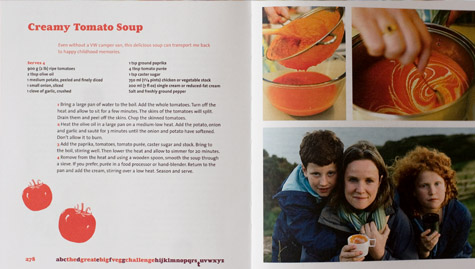 Each chapter has basic information about the ingredient alongside cute stories. Edamame is a favorite ingredient around here, and I decided to try Charlotte's edamame soup which was a big hit with Wayne. A bit of olive oil, potato, frozen edamame beans, and vegetable stock become a satisfying, protein-packed bowl, of pale green soup you can make a meal out of. Congratulations to Charlotte and her family for creating a fantastic new book that I'm sure will inspire many fussy eaters. In fact, I know a few adults who could learn a thing or two from Freddie ;)

In a rare instance of fussiness, I ended up pushing this soup through a strainer to smooth it out a touch. Totally not necessary, but an option if you're up for it. I also finished my version with a drizzle of toasted sesame oil, fried shallots, and crushed, toasted peanuts. To make this soup vegan, omit the creme fraiche.

- see headnotes for garnish you see in photo

In a pan, saute the onion and potato in the oil over medium heat, stirring frequently. Cover and allow it to soften for about 4 minutes, until they have both softened. Stir to prevent the mixture from sticking and burning. Add the beans and the vegetable stock. Put the lid on and simmer on a medium heat for 15-20 minutes until the beans are tender. Puree in a food processor or with a hand blender. Stir in the creme fraiche, reheat gently without boiling and serve.

Excerpted with permission from The Great Big Veg Challenge by Charlotte Hume (Clarkson Potter, a division of Random House, Inc. 2008) 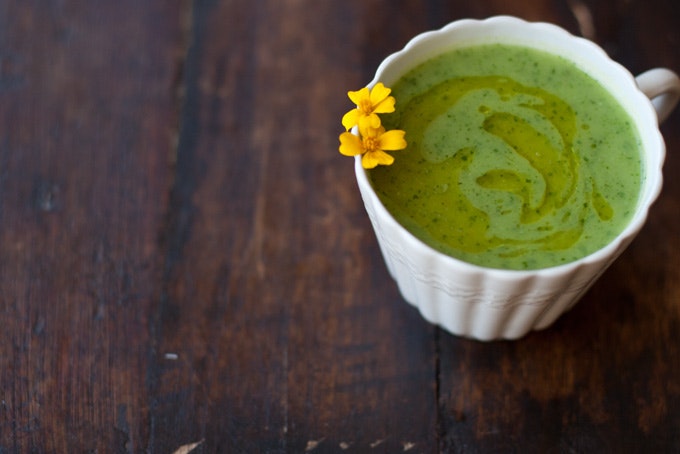 Mmmm, this looks good! I recently bought my first bag of frozen edamame and used them in soup too. I'm hoping to try stir frying with them next. They are a nice change from peas, which I tend to use too often and thus created pea boredom :-)

How wonderful - I haven't been over to Charlotte's blog for quite a while so it's great to hear that she has turned it into a book. Having spent much of the last three weeks auditing the lunch of British primary school kids I'm convinced that there are loads of parents who could pick up a few tips from Charlotte's imaginative tactics!

Unbelievable! I'm moving in a week, and trying to clean out my freezer and cupboards. I just happen to have some edamame in the freezer, and potatoes and creme fraishe in the fridge. A perfect meal, who knew?

what a great idea for a cookbook. i know several fussy adult eaters who could benefit from something like that. can't wait to try this soup, but chilled. i imagine it will be incredibly light and refreshing cold.

yum! though I love snacking on edamame, I would have never thought to use it in a soup! I bet this would be rounded out nicely with a side of brown rice and some pan-fried pot stickers

hello, dinner for tonight just appeared in front of me. thank you!

I may have to get this for my siblings, they are still recovering from my mother's boring, bland veggies.

Sounds easy and delicious! Um ... but what is creme fraiche? Thanks!

I always have a bag of edamame in the freezer - I don't know why I didn't think to make a soup from them. I'll give this a whirl. I don't have kids but when I do, I will be trying everything I can to get them to eat the widest variety of foods possible. Healthy eating is something we should be letting our kids grow up with - not suddenly enforcing on them when they are teenage and obese. I think Charlotte's book could really encourage some people to change the way their children eat. If she can do it - so can they.

Josephene - edamame is the (I think) Japanese name for soybeans. They're usually available in a megamart in the frozen section, though often in the "organic" frozen section. Usually available in the shell or shelled already. I buy them in the shell, steam for about 7 minutes, and sprinkle on kosher salt - an awesome appetizer or side. Just squeeze the pod to pop the bean into your mouth. tsvua - this recipe calls for shelled beans, even pureeing the soup wouldn't be enough to make those pods edible! HS: Thanks for jumping in Richard. I'm just back from a trip and sometimes it's hard for me to keep up with the questions. Much appreciated :) -h

This sounds really simple and good! I love the idea of fried shallots on top.

is the edamame you use with the pods or just the beans?

Edamame is one of my favorites, I can't wait to try this!

I don't know this bean -- would a picture of it on your blog be possible? Josephene

Could be a great gift idea for parents of toddlers.

I think I'm one of the few who's not obsessed with edamame. People are nibbling it as a snack these days. Thanks for the recipe, I should definitely have a try! I've tried to come by a good recipe to combine the edamame, and now I think I found one, perhaps more for the cold days.

Hi Heidi, I used to call the Bay area home and have been missing its culinary delights since moving to Germany. I check here once in a while to get inspiration on recreating *home*, at least for my taste buds :) Thanks for a wonderful site. By the way, has anyone come across edamame (fresh or frozen) in Berlin grocery stores?

This cookbook looks great! Can't wait for it to come to this side of the pond...until then, I'll have to try the ideas from the blog on my own little picky eaters! Thanks!

Awesome! My daughter likes only 4 foods: grilled cheese, watermelon, peas and avocado. This looks like a great book.

i love raw edamame! It's a really good idea to use them for a soup, thank you for the recipe