Back in the late 90's Vogue Entertaining + Travel was the Australia-based magazine I splurged for any time I came across it on the news stand. It was gorgeously produced with the likes of Mikkel Vang, Petrina Tinslay, David Loftus, Quentin Bacon, and Con Poulos filling the pages - imagery that was modern, aspirational, and (often) lit naturally. About that time, they started publishing a series of little seasonal Vogue Entertaining Cookbooks. Over the years I collected five of the volumes, and all of them have survived multiple moves (and brazen cookbook purges). Paperback, and roughly 160 pages in length, their simplicity is inviting, and a straight-forward mix of recipes and idea lists are everyday approachable. Each ingredient-led chapter is filled with simple, short-order techniques and ideas. Sometimes I'll sit on the floor of my pantry while a laundry cycle is finishing and flip through them. Which is what was happening when I came across a spring-fabulous shot of olive oil-braised leeks. I used the general idea as a jumping off point, and proceeded to have olive oil braised vegetables for the next five meals in a row (Wayne was out of town, and I tend to slip into easy ruts). Spring is the perfect season for olive oil braising baby vegetables into silky tenderness - you can pick and choose the best baby vegetables as you come across them. I did the version in the lead photo on it's own when Adele came by for a Friday lunch. Adding some toasted pecans and fresh dill as accents to the vegetables. The slightly different version (below) was with lemon in the skillet, micro greens, all served a top a plate of brown rice and adzuki beans - family-style. Not much to say about my little lunch bowl here - the last of the leftovers. Back to the pecans, which I can't seem to get enough of. Back issues of VE+T pop up on eBay in the US on occasion. Though, if you're in Australia, you're in luck, because you can sometimes find entire back libraries of the magazine. Libraries that span the better part of a decade.Same goes for the Vogue Entertaining Cookbooks - keep your eyes peeled :) ! -h

I used baby carrots, tiny potatoes, and baby fennel here, but you can certainly swap in other vegetables based on whatever looks appetizing or is in season. Just cut them roughly the same size, so they cook in roughly the same time.

Add the olive oil to a large skillet over medium-low heat. You want the pan to be hot enough to cook the vegetables, but not hot enough to brown them. Add your long-cooking vegetables to the pan - in this case, carrots, potatoes, and fennel - along with the salt, and allow to cook for a few minutes. Add the onions, then cover and cook for another 10 - 15 minutes. You're aiming to have everything end up silky and tender, just cooked through. The trick is to avoid overcooking - you want the vegetables to maintain some structure. A minute before you think the carrots and potatoes are cooked, add the asparagus and a few of the lemon wedges to the pan. The asparagus is quick cooking (depending on its thickness), so you're adding it at the end. Cook just until it brightens, and is barely tender. Remove from heat and sprinkle with herbs (dill or thyme). Serve with the remaining lemon wedges to the side. The vegetables are good hot, or at room temperature. You can serve them as antipasti - at room temperature, or over something. You can see the different ways I tweaked the general idea over a few days up above. For ex: served on their own, or over the brown rice and adzuki beans I had on hand. 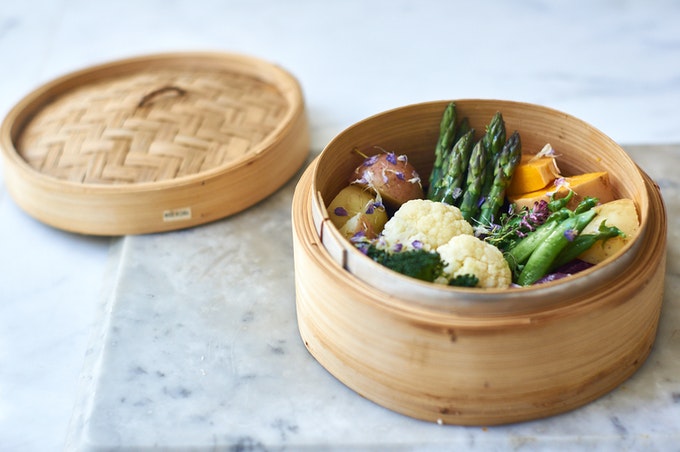 A reminder of what a great cooking technique steaming vegetables is. Fast and flexible for the win. 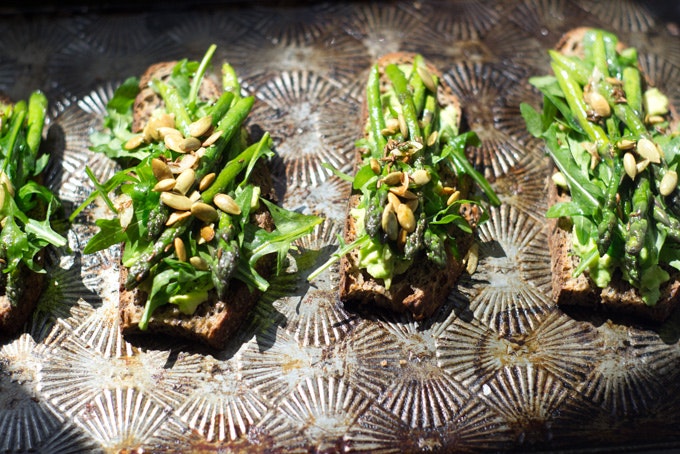 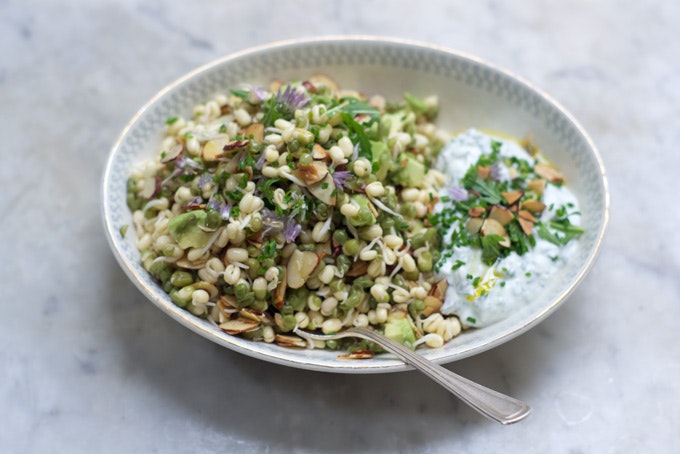 One of the best salads I've made in a long time (mung bean sprouts, avocado, arugula, yogurt, almonds) & a look at the QUITOKEETO packaging.

Did you happen to taste the olive oil after cooking the veggies? Infused with all that goodness or throw away?

Ah, I am so pleased you highlighted this little book. I have it , and its friends , on my shelf and I love them. The recipes are still very modern but I also enjoy the side bars with creative suggestions for use of fresh produce.

hey heidi - looks lovely :) would you happen to know where you got that bowl in your bottom photo? it's as beautiful as the food served in it!

HS: Hi Sara - that is one of my Colleen Hennessey bowls. I'm friends with her sister, Molly of Ambatalia. You can occasionally buy her goodness at Molly's shop in Mill Valley, or at More & Co.

Heidi while in SF last week (China town) I was bragging about your great website 101 cookbooks .com to my friend and as we were looking for some place to have lunch. We came upon a vegan Chinese cafe on Stockton and Vallejo streets I believe called Loves we had a delicious vegan lunch. The point, thank you for inspiring, sharing and caring about the foods we eat.

This looks a lovely and simple vegan dish, delightful. I have a huge pile of Vogue Entertaining magazines from the 1980s, just cant throw them out somehow. Lovely recipes and photography.

Great. I do something similar often, using whatever veggies are fresh at the farmers market!

Oh, yes, I was ( and I still am) a big fan of the 'old' Entertaining + Travel. I still have a small pile of them. I'm not familiar with the small cookbooks, living in the Netherlands, so I start wondering what treasures.....

Thank you for this post, I got overly enthusiastic at the farmer's market last week (the first Upper Haight one of 2014-yay!) and have all of these in my fridge needing to be eaten. Perfect timing!

Beautiful dish. I am going to have to try cooking vegetables this way

Love this, Heidi! I always love seeing your posts on my feed. What a simplistic and delicious way to highlight fresh vegetables.

This is my idea of heaven, simplicity at its best. I love it when fresh wholesome produce is the centrepiece of a meal. I have never tried cooking vegetables this way - sounds amazing though and I must try. I wish I had a collection of old cookbooks/magazines! My mum was never into cooking unfortunately... but thanks for the inspiration! With Love, Thais

I love the pure ness and simplicity of the Spring vegetables. Looks like feel good food! Beautiful.

Beautiful dish, especially over the brown rice and adzuki beans. Love the pecan and dill accents too. You find the most interesting and off-the-beaten-track cookbooks! Love hearing about what you're reading!

I love the thought of adding fennel to your nice assortment of baby vegetables. Lemon is my definite go to right now... trying to spring up whatever I am creating.

I am a big fan of vintage cook books too. I have Woman's weekly and AWA cookbooks that date back to 60s. While they may look dated the recipes are solid like this one.

I just saw a recipe yesterday and thought of you. Roast broccoli stems sliced in half length-wise like osso bucco. They scoop out the broccoli 'marrow' and serve on toast. I thought you might like that :) These veggies look awesome!

I'm always looking for new ways to serve vegetables to get my recommended daily intake and this looks like it's 5 in one dish. Fantastic - thanks for sharing.

Everything you make is always so completely gorgeous! I love love love the addition of crunchy pecans on the top of the veggies!

This looks so nice and balanced! Loving the colours of the dish, nice and Springy, now - we just need some nice weather to go with it. I love looking up recipes in proper cookbooks instead of using the internet (sometimes when I see entries like this though, I simply have to take note of them!) Have a lovely day :) x

Heidi, I was a big VE&T fan too and only a few years ago let go of my massive collection of the magazines that I had been buying since the late 1980's! I still miss them a little bit......