I like to mix and match. It's been a bit of a recurring theme in my life. One of the (many) things I enjoyed about working on TED years ago, was helping to put together an event where, say, one minute you'd have Stefan Sagmeister speaking on happiness and design, followed by Malcolm Gladwell on the pursuit of the perfect spaghetti sauce. Flash forward a handful of years, and I don't do much in the way of events anymore, but when I do, I like for them to be inter-disciplinary, alongside people who love their work or craft. I thought that I'd share pictures from one such event today, and then let you know the details of my upcoming West coast book signings. 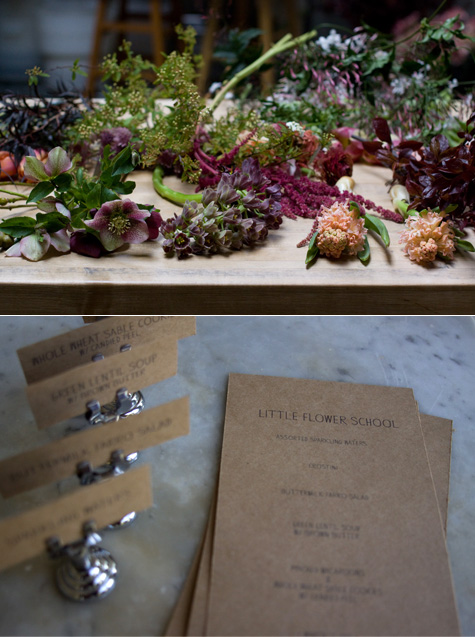 I'm a bit slow getting this together, but last weekend I was fortunate to work (and play!) alongside a whole lot of talent. I've been a fan of Little Flower School for quite some time now. Nicolette and Sarah make stunning arrangements, and I kept hoping I'd be able to take one of their classes in Brooklyn at some point. As fate would have it, they came to California first and we put together a beautiful day of flowers, food, and new friends at June Taylor's Still-Room in Berkeley. Such a nice way to spend a drizzly Sunday. 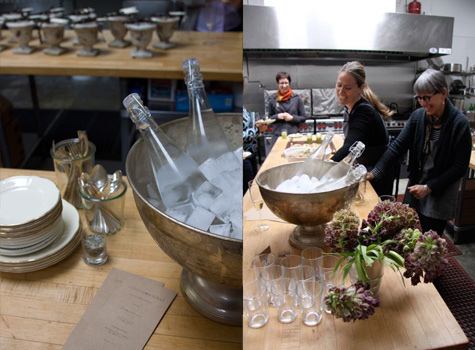 I made a few things for lunch - sparkling water spiked with June's syrups, crostini with goat cheese and yellow split peas from SNC, Green Lentil Soup with Curried Brown Butter from the new book. I made super-teensy versions of these, and also whole wheat sables studded with June's candied peel (I'll try to post that recipe soon). 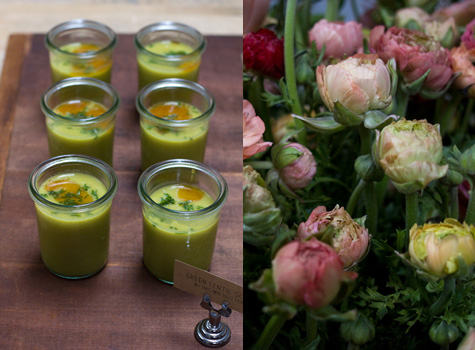 Now, I know a number of you feel cheated if I don't close out each post with a new recipe, and there is one! It's the lovely little soup pictured above. As I mentioned up above, it's from the new cookbook - but you'll have to hop over and visit the ladies at Remodelista for the recipe, I gave them first dibs on it - Green Lentil Soup with Curried Brown Butter. I think I tapped out the number of recipes I can post from the book, here on the site, with the PDF sampler. ;)

If you're interested in seeing more photos from the event, Remodelista has a more detailed write-up. Here's the Little Flower School post about the class. And Little Flower School on Flickr as well. Another thing worth mentioning - some people don't know that you can visit June's Still-Room & Shop in Berkeley. You absolutely can. It's a beautiful space, and always inspiring. She's open Tuesday - Friday, 11 AM - 4 PM, and on weekend class days as well.

Now, looking forward. I'm over-the-moon excited about doing a handful of book-signings next month - west coast for now. One in San Francisco. One in Berkeley. One in Portland at The Cleaners. And one in Seattle at Spare Room, with the chance of a separate afternoon signing that I'm still working on. I'm teaming up with Kim Boyce in Portland, and Lara Ferroni in Seattle. Can't. Wait. I'm hoping we'll have some other special guests & familiar faces at those signings as well. I'll post reminders as the dates get closer, but this is the jist of it. Can't wait to meet more of you in person. xo

The flowers are absolutely gorgeous. Nothing like flowers to brighten up anything. Looking forward to your new book.

Any chance you will do more events in the Bay in the future? I'm moving to SF in June and I'd love to join you sometime! MK HS: Hi Madeline, I'll likely do a farmers market demo down at the Ferry Building later in the summer. Hope to see you there.

i just bought your first cookbook and love it! opened it on friday, and i have already made two of the recipes :)

This all looks so lovely. I am very excited about the new book and I hope you find your way down to Los Angeles for a signing!

Looks like a perfect Sunday afternoon to me! Beautiful pictures - I only wish there were some of a finished arrangement... good luck with the book signings! HS: Eleanor, the Little Flower School Flickr page has shots of all the final arrangements. Linked up above.

Those limoncello macaroons look delicious, I don't know how I missed that recipe before. Hope you had fun, great photos!

Love the font on the menu! What is it called?

Beautiful photos. Lentil soup with curry sounds like a plan.

See you in Seattle!

I was SO hoping you'd stop in Minneapolis;)

The flowers are gorgeous! They remind me of a faery tale for some reason.

I love rustic flower arrangements. Peonies are gorgeous. I've never seen them in those earthy tones before though.

Oh, if I could buy one thing right now it'd be flowers...they fill up the room with joy and life. thanks for all the lovely photographs.

The flowers are stunning. I felt like I was in the room. I love the soup recipe and the idea of a curried "butter" (in parenthesis, as I'll try a vegan version).

I'm so excited for the SF signing! I have to see if I can get off work early; hopefully I can manage it.

I hope to come to the Portland signing! Just so you know, the flyer for the signing says both Thursday and Friday on it. I am assuming it is Friday... HS: Fixed! Thanks for the heads up :!

So inspiring! I am such a fan of interdisciplinary cross-pollination. Will be at your San Francisco reading, looking forward! (And jealous of those lucky folks in Seattle who get you and Lara Ferroni both.) HS: Looking forward to meeting you as well Kimberely!

All the travel sounds exciting!! I sure do love the fact that I can find a great recipe here anytime I drop by. You have an amazing archive. Thanks so much for sharing!! Denise @ Creative Kitchen

The flowers look gorgeous! It just makes me wish for spring that much more :)