I wasn't going to run this Spring Panzanella recipe. It sounded like some of you were suffering from pea and asparagus fatigue, so I planned on saving it for next year, or just keeping it to myself. But after seeing mountains of peas at the Union Square Farmer's Market in New York City on Saturday morning I changed my mind. Here it is, one last pea and asparagus recipe, before it's too late and we run headlong into summer. I used herbs from my container garden (more about that ongoing saga later), and fresh peas, asparagus, and greens from the farmers' market. The thing that makes this recipe great is that you don't need to make up a separate dressing, flavorful pan juices from cooking the greens do the job nicely without any extra effort. 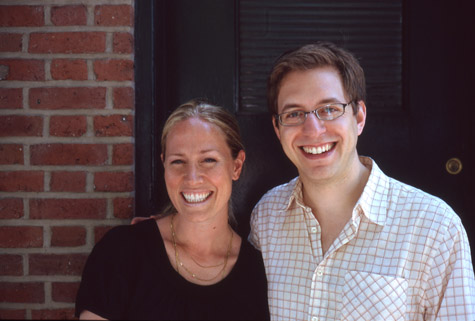 For those of you interested in my NYC trip, the Greenmarket was just one of the great things I encountered on this trip - it's actually hard for me to believe what we were able to cram into such a short stay. Here's a list of highlights from my 72 hours in NYC; Union Square Greenmarket, cortado at Joe The Art of Coffee, Gibraltar at Gimme! Coffee, lunch with Grace, drinks with Harris, Dashwood Books (photography books), Gobo, two of my favorite paintings, Bonnie Slotnick Cookbooks, Birdbath, Soho Grand Hotel, baked eggs & brunch with Adam at August, Caravan of Dreams, Babycakes NYC, Magnolia Bakery, Le Pain Quotidien, Paul Smith store in Soho, A.P.C., Cafe 2 at the MoMA, Dean & Deluca, Ten Speed Press reception, James Beard Foundation Awards at Lincoln Center, breakfast with Lily, and a couple other rendez-vous I'll keep quiet for now ;).... 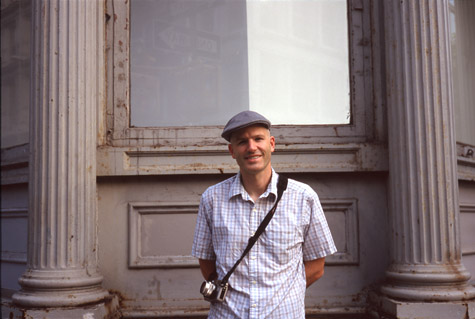 So, we had a great time at the (blindingly) star-studded James Beard Awards and the Gala Reception that followed - both took place at Lincoln Center's Avery Fisher Hall. It's funny, I suspect the memory that will stay with me longest was not part of the official plan. Following the awards ceremony (and as if to remind everyone to keep things in perspective), the sky opened up into a remarkable lightning display. To stand on the balcony of Avery Fisher Hall, sheltered from raindrops the size of elephant tears, thunder booming, sweltering heat, staring up at the twinkling buildings of New York city was something I will hold onto for a long time.

The photo of me with Adam up above was taken by Wayne in front of August.

The bread I used also had walnuts and dried cranberries in it, but I think I'd prefer a seeded whole wheat version. Use whatever you like.

In a large bowl toss the bread with the garlic, shallot, thyme, salt and olive oil. Turn the bread out onto a baking sheet and toast in a 350 degree oven for about 15 minutes - or until they are nice and golden and crunchy.

In a cold skillet pour in a splash of olive oil, a splash of water, and a couple pinches of salt. Dial up the heat and when the water starts to bubble stir in the asparagus. Cover, wait about twenty seconds, now add the peas. Cover, wait a few seconds, now add the spinach. Cover and cook just a few more seconds until the spinach starts to collapse just a bit.

Put the bread crumbs in a large bowl. Now pour the asparagus and peas and all the pan juices over the top of the bread.

Give it a good toss, add the basil leaves and toss again. Serve the salad family-style on a big platter. 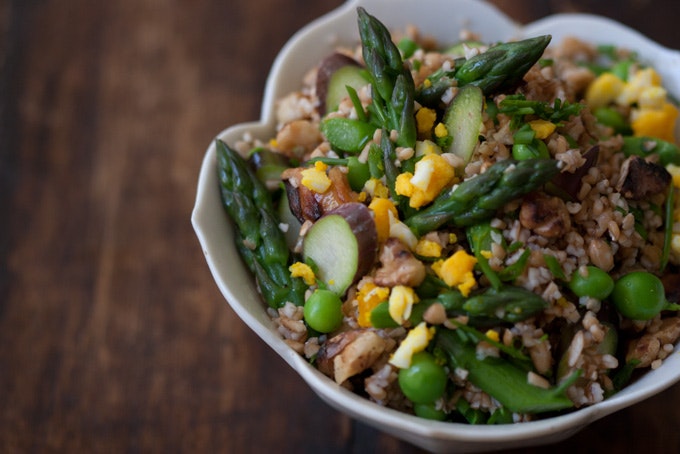 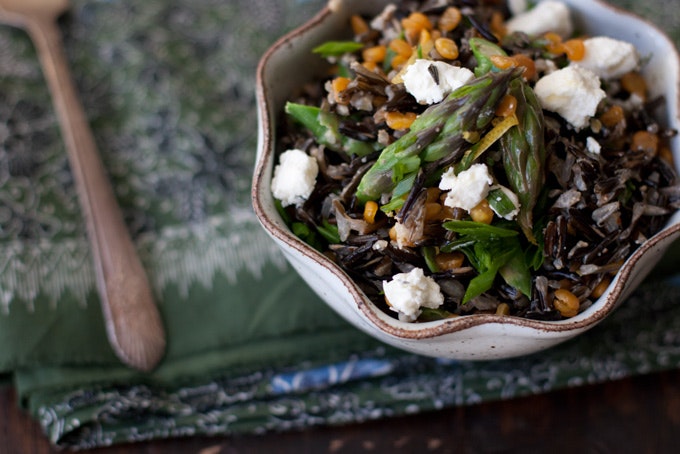 A spring-inspired wild rice salad - vibrant asparagus, yellow split peas, and wild rice tossed in an almond butter dressing and finished off with a bit of goat cheese and chives.

Heidi - I recently discovered your blog! Just in time to hear that you were nominated for a James Beard Award - way to go! I think I will have to add your cookbook to my growing collection (I'll have to count and see if I am around the 101 mark!?) This recipe looks great, I will never tire of spring peas and asparagus recipes! I am not a vegetarian but contemplate the concept continuously - at least I can add more and more vegetarian recipes to my repertoire! I tried your "Broccoli Pesto & Fusilli Pasta" recipe last week and thought it was great - earthy, crunchy, and delicious! Thanks so much!

As it happens, I just made dinner with the last of the peas and carrots I bought at Union Square this past Saturday. It was indeed darn hot that morning (and that weekend).

Hey Heidi, great recipe! I hope you don't mind, I put a link to this recipe in my panzanella post on my blog. I'm gonna check out your other variants on panzanella! Cheers, Jan.

OMG you were at gobo and I missed you? I'm a server at gobo (the one on the UES), you probably went to the one in the village. I hope you enjoyed it. I guess I missed my opportunity to have your book signed... (and to give you dessert on the house) HS: Yes, we went to the one in the village and then walked to a party near Times Square (it was so nice out!) I loved the seitan skewers - really clever and tasty.

Please, please please continue to inundate me with seasonal recipes while the getting is still good for asparagus and peas! I've got loads of them and need to find as many ways as possible to eat them all up before it's too late (hate to waste).

I LOVE PANZANELLA!! Can't wait to try it, Heidi!!

oh I can never get tired of peas and asparagus! keep it coming

ooh this one looks effortless and delicious. just my kind of summertime meal. thanks!

Wayne is sort of hot. =/ What a dreamboat.

I could live off of peas and asparagus until I turned green! Thanks so much for sharing!

I love panzanella! And although I am a little bored with asparagus lately, I can't seem to stop myself from buying it, so it's nice to have a variety of recipes to use :) I'd also love to sub fava beans for the peas here because I have a big bunch of them!

Born and raised in wisconsin, I spent years (falsely) believing that I didn't like peas or spinach, because I had only ever had the sad little frozen kinds. We'd reheat them with no extra seasonings and serve them like that. yuck! The first time someone served me fresh sauteed spinach with olive oil, garlic and a hint of lemon I nearly wept with joy it was so good. I never tire of a great way to get more tasty veg

Joe, I love that place! The barista's are especially pretty!

I had to stop lurking to tell you that Wayne is absolutely adorable! I try so many things from your website, I can't wait to try this recipe. Panzanella is one of my favorite things, and I would have never thought to put this together on my own. I could never grow tired of asparagus!

The asparagus will dry up for the season before I get tired of it, so keep the recipes coming. Panzanella is always satisfying, a good way to make the veggies heartier. And I'm alway letting bread get old, it seems. There are only so many croutons you can make.... I bet Green Market was great. I'm just finishing Tim Stark's book, Heirloom, and would love to get a view of that table full of tomatoes.

Becky and the Beanstock

another panzanella! wonderful! i still can't get over the strawberry panzanella recipe of yours and was wondering how one could incorporate other fruits into it now that the strawberry season is over. please don't keep it till next year to let us know. now i gotta go try this...

what a trip!! NYC is like that -- so full of offerings and unique experiences. If I didn't love the Bay Area so much I think I'd migrate there... and about the recipe -- it looks delicious! I have made your strawberry panzanella multiple times, always with great results; I'm sure this would be quite the same -- plus we might as well celebrate peas and asparagus while they're still in season!