Don't let the title fool you, this is a twist on creamed corn. It only took about 10 minutes tops to make. You grate about six ears of corn with a box grater, or, if you are like me and have retired all grating utensils except for the miraclous Microplane....you resort to running a knife up and down the sides of the corn.

Throw that into a skillet with some water. Mine probably had a bit of a different consistency than intended because of the lack of box grater, but there was plenty of corn of all types being represented: corn kernals that looked as if they had been grated, mashed corn kernals, a few whole corn kernals that snuck through, and of course the delicious corn milk.

Heat it up, and it will thicken a bit, and toss in the splash of cream, grated cheese, and what turned out to be enough salt to give any large animal a heart attack. I wouldn't have used that much salt, but it really needed it. Maybe next time I will use some cayenne or fresh basil or something to help offset that.

A great sidedish. The recipe says 'serves 4'....it seemed to only serve two or three. You have to use the best corn you can find if you are going to bother making it. 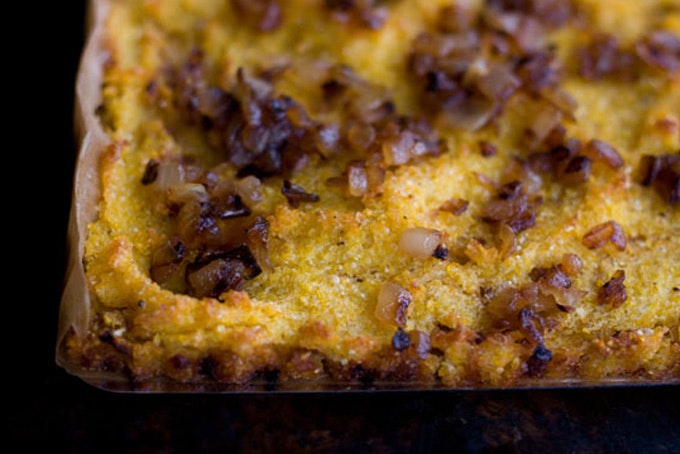 This is what happens when you cook a pot of cornmeal until it is thick and creamy. Add a bit off cheese, some deeply caramelized onions, spread it in a pan, drizzle generously with olive oil and bake until the bottom and sides are deeply golden and crunchy. 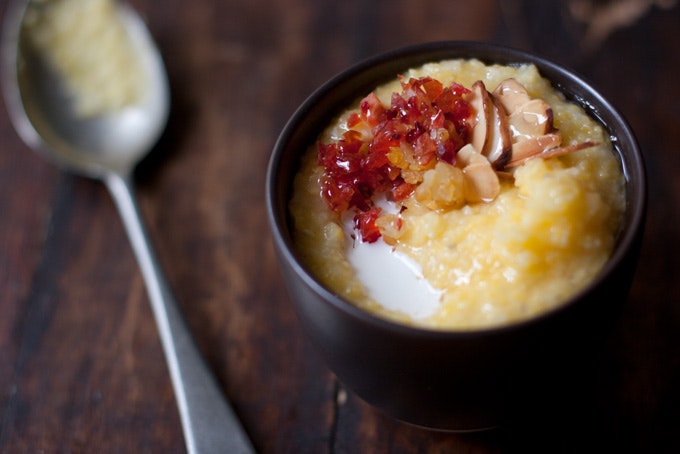 This breakfast polenta recipe is creamy, comforting and receptive to many add-in flavors and textures. For this version I served small bowls of fluffy yellow polenta topped with toasted almonds, jewel-colored dried fruits, and a drizzle of cream and honey.