I was excited about this recipe for two reasons: first, because it was from a healthy cooking book, and second because I would be able to use up some of the Chimayo red chili powder I've had in my freezer since we got back from our roadtrip to Santa Fe. I'm going to take a stab at cooking more recipes from the 'healthier' cookbooks collecting dust around here. Summer is here and I've been on a cake and baking bender lately-not a good combination.

This recipe is from the best-selling cookbook written by Dr. Weil and Rosie (you remember, Oprah's personal chef). To kick things off I put eight sun-dried tomatoes in a bowl of hot water. Look for sun-dried tomatoes in the bin section next to the dried mango chips. The dressing portion of this salad is just one of those food processor type recipes where you throw (just about) everything into the processor and blend until smooth.

I ran into a bit of a snag processing the tomatoes (even after I rehydrated them in that bowl of water for 45 minutes). They weren't quite soft or plump or not. Next time I will use boiling water. At any rate, I had to pick out a few chunks (I think it was the stem parts) because they weren't breaking down.

The dressing is a beautiful red color, almost like a cocktail sauce. It is a red I rarely see in a salad dressing. When all was said and done, the flavor just needed a hint of brightening....It needed a couple pinches of salt (the recipe called for low-sodium soy sauce)....but it turned out being a nice dressing. The recipe called for fresh spinach, I used fresh baby spinach, crumbled feta, a few Kalamata olives, and I didn't have sunflowers on hand--but toasted up a few pinenuts instead.

I was a bit surprised at how little of this dressing you needed to use. I guess that is part of the reason it is 'healthy', it had relatively little oil in it, and you only needed a splash or two to coat a large bowl of greens. This one recipe yielded enough dressing for a few nights at least. 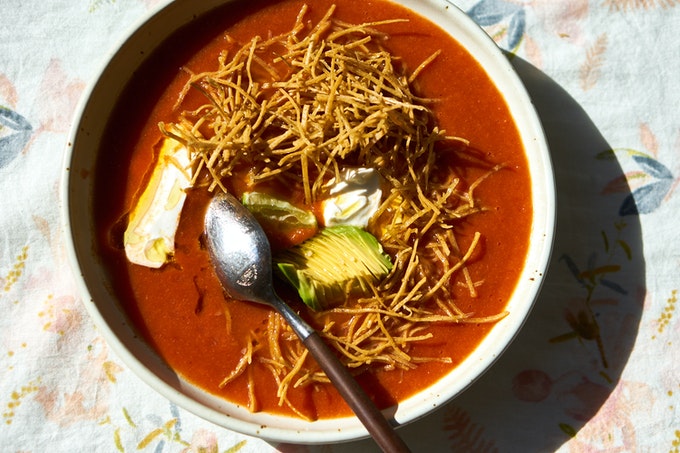 My tortilla soup recipe - a full-bodied, spicy vegetarian broth envelops a nest of baked tortilla matchsticks. Tiny roasted tomatoes along with a bit of goat cheese lend tang and texture, and flecks of sun-dried tomatoes bring depth and richness to each bowl. 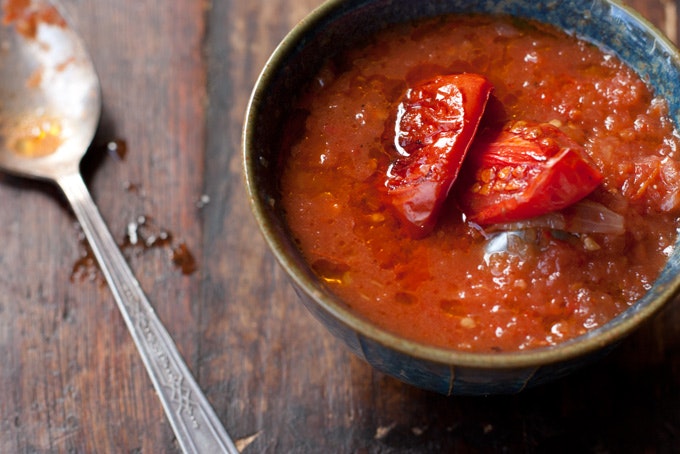 A roasted tomato soup recipe I featured in my last cookbook. Roast tomatoes, onions, garlic, and a red pepper then puree and season with a touch of smoky paprika. Couldn't be simpler or more flavorful.

Healthy, beautifully textured, and colorful this split yellow pea soup makes for a terrific lunch. The yellow split pea soup base is topped with a tzatziki-inspired yogurt dollop, a touch of mint, a spoonful of finely chopped black olives, and a drizzle of olive oil.