I know you all like a simple, goes-on-anything sauce. It has been a while, so I thought I'd shoot this gem in your direction. It's a good one. The main ingredient: horseradish. If you're anything like me, you enjoy most encounters with this feisty little root, yet(!) rarely deploy it in your own cooking. True? I find it intensely invigorating and think of the boost it adds to food as a more mustard-y cousin of wasabi. Horseradish has long been used for medicinal purposes, and this particular citation made me laugh a bit, "...the traditional treatment for sinusitis is to take a half teaspoonful of grated horseradish sauce without dilution both morning and afternoon. Do not drink anything or eat for at least ten minutes after the dose. There will be a powerful feeling in the head, followed by a sensation of the sinuses clearing, sometimes accompanied with sweating and perhaps tearing..." Sounds about right. Especially the tearing part.

I have a pretty incredible old cookbook by George Lang written in 1971 - The Cuisine of Hungary. There are a number of horseradish recipes in it, and they've compelled me to play around lately. I'll include a simple horseradish sauce down below - it's great on everything from baked sweet potatoes to egg salad, as a dollop on stews, on sandwiches, and alongside pan-fried pea shoots. 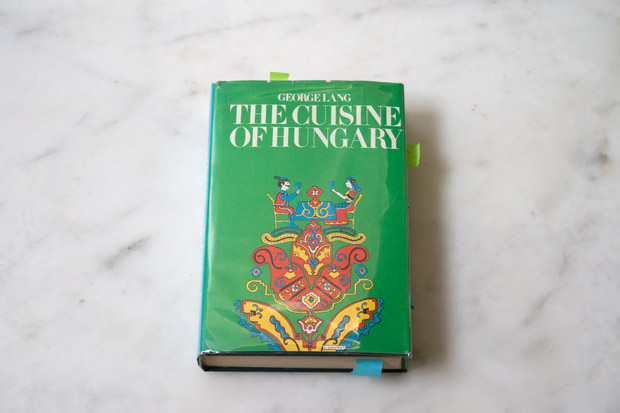 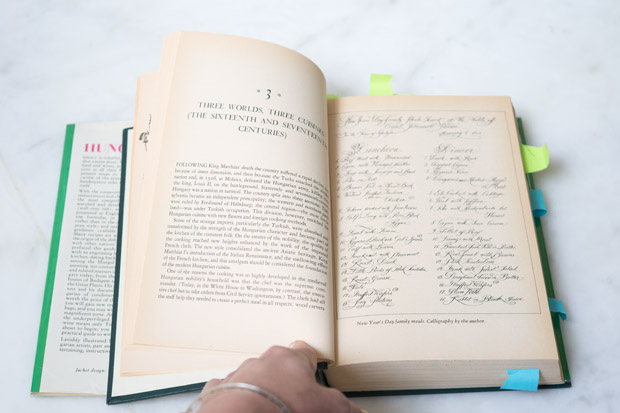 New Year's Day family meals served at the table of Count Thurzo, in the town of Galgoc, January 1, 1603. Calligraphy by the author. (above) 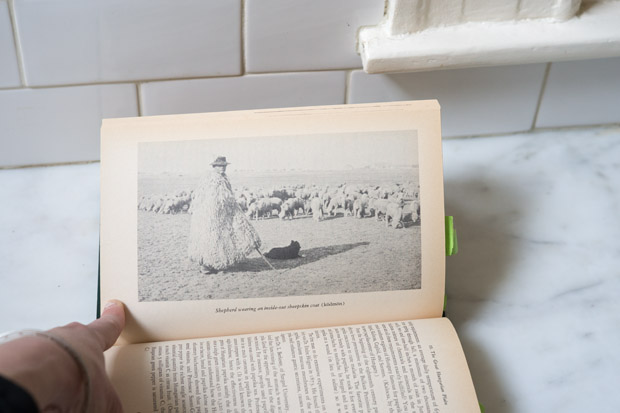 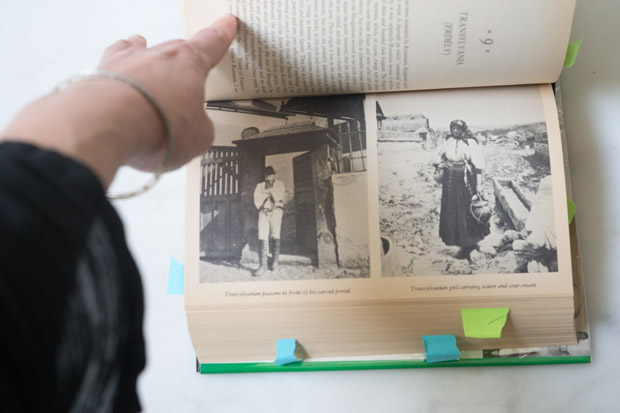 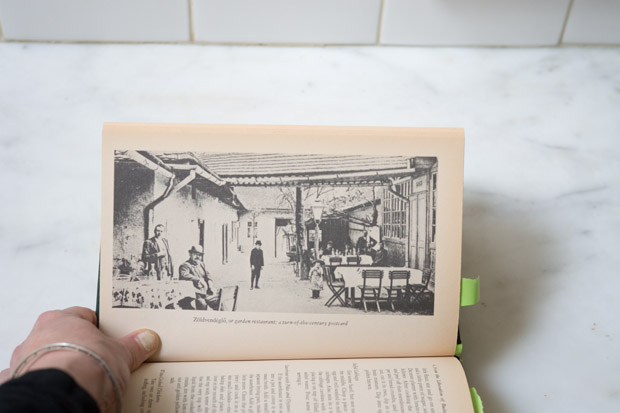 In addition to some fascinating recipes, The Cuisine of Hungary has a selection of photos and illustrations throughout (above). There's a shepard wearing an inside-out sheepskin coat. A Transylvanian girl carrying water and sour cream. A boy in black standing in a garden restaurant at the turn of the century. 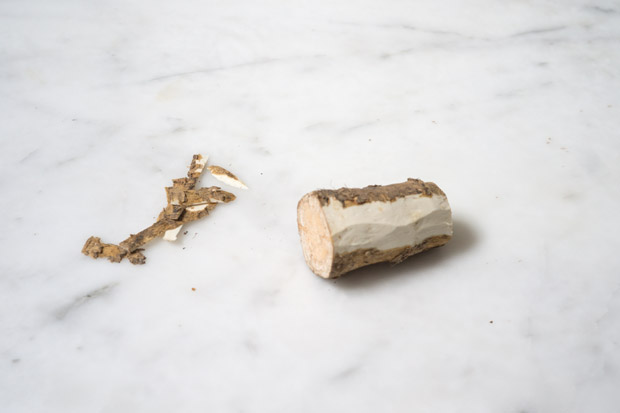 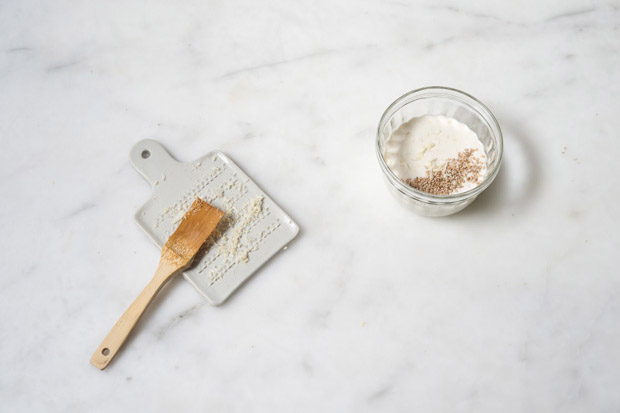 The horseradish sauce ended up on a lot of things. One of the favorites was this (lead photo) simple platter of roasted delicata squash, flash sauteed pea shoots, and shredded hard boiled egg. The finishing dollop of feisty creaminess made it seem much more elaborate affair than it actually was. A quick list of other ideas...On baked potatoes with lots of herbs. On baked sweet potatoes with toasted walnuts and chives. Folded into egg salad. Or as part of a shaved celery salad. As an accent in both chunky stews and pureed soups - particularly cabbage, potatoes, carrot, or spinach. Or, swirled with Hungarian paprika, or an oil made with olive oil, a bit of garlic, and the paprika. Anyhow, just play around, you will see how adaptable it is.

One thing I wanted to call out before we get to the recipe - as far as grating goes - I have the best luck using a standard box grater (small section), or Japanese ginger grater. The microplane is more tedious and a bit frustrating. Alternately, you can deploy a food processor to make quick work of the task.

I find the small holes of a standard box grater do a nice job grating the horseradish. Also, if you can't find horseradish root, you can make this sauce using prepared horseradish (from a jar), you'll just have to trust your taste buds related to how much of the paste to add. Stir a bit along with the mustard into the sour cream, and omit the vinegar and sugar. Salt to taste.

Combine the vinegar, salt, sugar, and mustard in a small bowl. Grate the horseradish into the mixture, you'll want about 2-3 tablespoons total. Stir and allow it to sit for a few minutes before gradually whisking in the sour cream. Taste and adjust to your liking. I serve sprinkled with toasted sesame seeds. 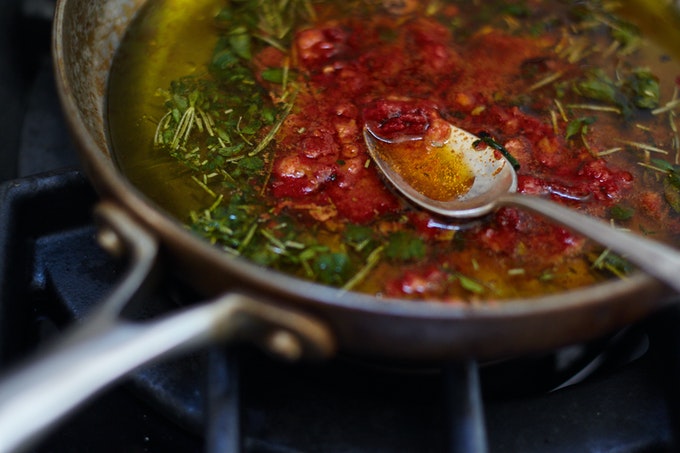 I call this the magic sauce recipe. In part, because it makes everything it touches shimmy with deliciousness. It's magic like that. Technically, it's a riff on a chimichurri sauce - one that has veered off the rails in a big way. 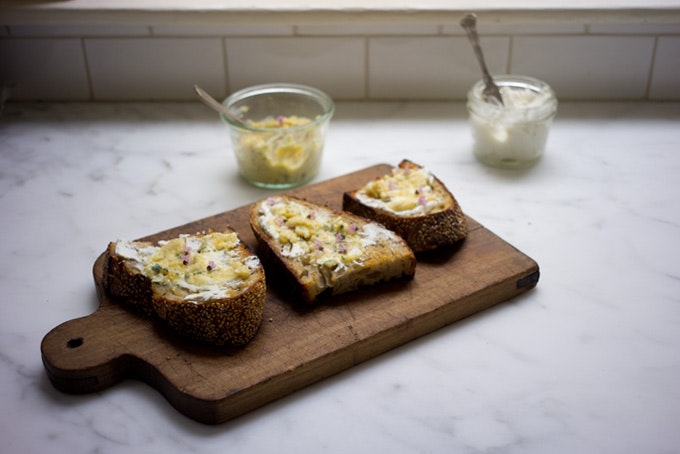 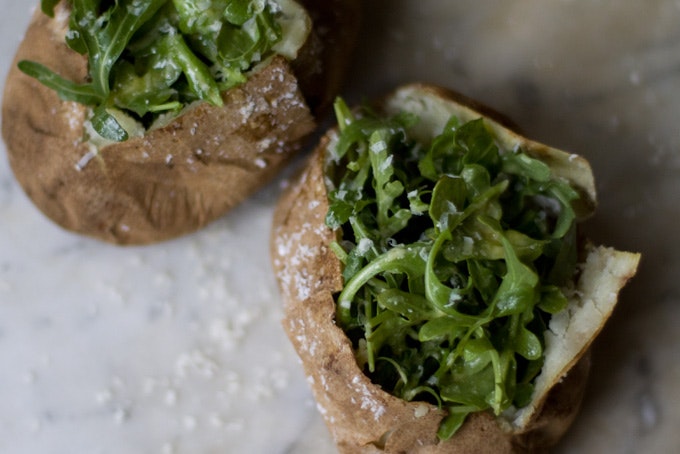 If you want to know how to bake potatoes like a pro, keep reading. I love this baked potato recipe, resulting in perfection every time. Crispy jackets split open to reveal a fluffy white potato interior.

I would have a really hard time not smearing some of this sauce on every sandwich I made until it was gone! Which actually is an excellent argument for making a big batch. :)

I love horseradish--almost as much as I love Heidi's cookbooks and blog (my number one source of recipes)! I feel like an idiot, but can someone tell me whether this recipe calls for dry mustard or jarred mustard?? I want to make this this weekend--for a hot Valentine's day! ; )

I make this a lot, make a big batch (will freeze some if way too much) lasts months in fridge. Used it for base for fresh horseradish sauce mix in whipped cream and creme fraiche. Best on poached egg or smoked salmon esp in the morning

Great sauce recipe! Wanted to chime in..we have horseradish in the garden, and I've found that my coffee grinder (that I use for spices) is the best tool for me....I still cry cuz it's so potent but it makes quick work of the job!

George Lang's cookbook is fabulous, glad to know you have it. SO much more than a cookbook; it's practically a history of Hungary and its neighbors told through food. The sauce and the way you use it sounds delicious--I'll give it a try! I can vouch for the sinus-clearing capabilities of horseradish: one New Year's at the house of some Czech friends, I was assigned the job of grating the horseradish. The description you cite understates the impact!...

I have read that the longer you leave grated horseradish exposed to the air, the hotter it gets (up to about 3 minutes), not the other way around. The vinegar has a neutralizing effect on the chemical reaction between the horseradish and the air and the sooner you add it in, the milder the flavor.

HS Hi Calantha - you know, I think the heat actually comes from how finely your chop or grate the horseradish - the more finely, the hotter because the cells are being broken apart. But I've found if I leave the horseradish out too long before using it loses some of it's strength.

I have weakness old cookbooks - There is something wonderful about them! Glimpse of past from the books makes me wonder and imagine the life the cookbook had:) I love fresh horseradish, I have to try this recipe - so simple yet sounds delicious! Your writing and blog is so inspiring.

Ok. So, I'm not a huge horseradish fan but my wife loves it. Gonna have to give it a try, maybe even for something tonight for Valentines!

Hello Heidi and @rozinchina! We also live in Romania, and we see shepherds in the same sheepskin cape often when we're driving around the country. Our neighbors dress in their traditional costumes, such as the girl pictured, on Sundays. Your book is not as old as you think. Pofta buna (Bon Apetit) from Romania! I'm making your sauce to go with our pork chops tonight.

Hey there, when it says 'mustard', is that ground mustard or prepared (as in, yellow) mustard? Thanks!

HS: Hi Christel - prepared mustard. Thanks for the catch.

We have a restaurant near us that serves a delicious horseradish risotto. No idea how they make it, but it's extremely tasty.

I have this cookbook & just love it! My mother grew up in Vienna, so the recipes bring back lots of memories.

I love horseradish (it also has a host of other medicinal purposes), and I'm going to try this as soon as I can get to WF and get some!

I've never used fresh horseradish but you've inspired me. This sauce sounds incredible and like something my husband would adore.

I'm not super familiar with Hungarian cuisine; I mean, besides goulash and stuffed cabbage. That book would be a great and informative reading to learn more on Magyar cuisine. I think a trip to Strand Books is definitely in order then; I'm sure I'll be able to find it there!

hi, great recipe idea. I live in Romania and my family is from the Transylvania region, which used to belong to Hungary and indeed we do like horseradish. I think here it is most commonly used on top of baked beetroot.

Oh boy do I love horseradish. This sauce looks delectable. And thanks for showing those lovely photos from the book - so interesting!

Mhm, that sounds delicious! I have used fresh horse radish only once. I should to get some and try this recipe, thank you for sharing. In Germany, horse radish goes traditionally with cooked beef (think roast beef, served hot or cold) and with smoked fish (salmon, mackrel or trout). It also pairs really well with beets.

I might be secretly from Hungry because I adore their cooking. The use of pickles and heat is so unique, also the range of vegetable braises makes my dinner complete. I never thought of using horseradish in a sauce but I can see why this recipe would make a great addition to a salad or roast dinner plate. Also What is the combination of vegetables you have use in the first picture? It looks divine!

I've never worked with the horseradish root before but plan to look for it. Thank you for the comment about putting it into vinegar as quickly as possible to keep the spiciness. I think we'll be trying this with poached eggs and avocado on toast this weekend using the jar of horseradish in the fridge. Great suggestions for incorporating horseradish into our food more!