Have you ever tried to pitch a tent in 50 knot winds? I can now say, with some authority, it's challenging. On somewhat of a whim, we tossed our gear in the car two days ago, pointed the car north, and set up camp along California's Sonoma coast. There are few places more stunning - golden meadows, craggy coastlines, rambling coastal trails for days. On some trips to this area we are met with dense fog, this time we were welcomed with blue skies, lingering sunsets, and wind that peeled your eyelids back. So, before I finish unpacking the car, I thought I'd share some photos and the recipe for the soup I made for our first night camping - lots of beans, vegetables, and stellette pasta. Tiny stars under the stars, with a good dollop of pistou for each bowl. 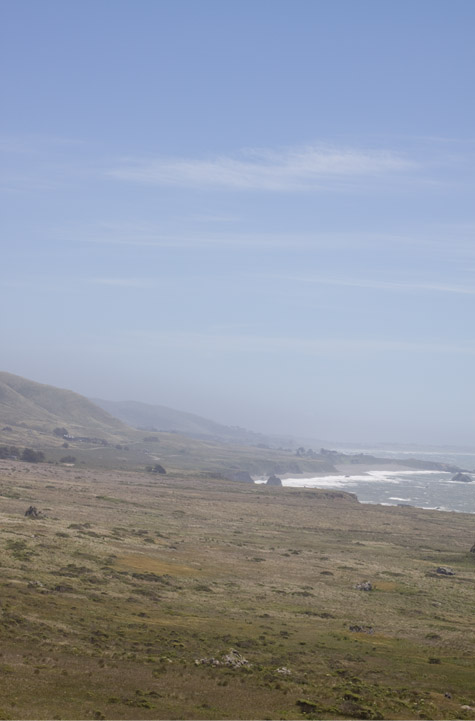 However spontaneous a trip might be, a bit of preparation (even last minute) always pays dividends. I threw a few things together, late, the night before we left. Anytime you camp on the Northern California coast, it can get chilly, so I made a hearty soup (with whatever needed to be used up), froze it, and counted on it to do double-duty as ice blocks in the cooler the first day. I figured serving it with some bright green basily pistou would be just the thing. All we'd need to do is heat it up. 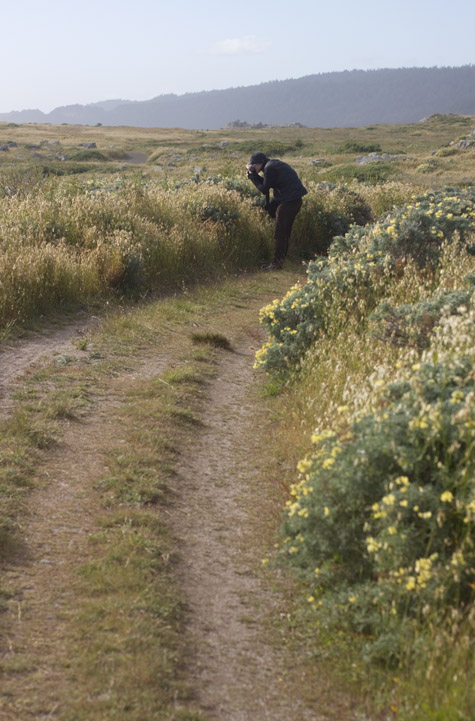 The best part of camping in this part of California is the coastal walks. The most challenging part is sharing the campground. One chuckle-inducing, abalone-diving neighbor told me he set his alarm for 4:20 a.m. No joke. I can confirm his 4x4 blazed out of the campground well before 5 a.m. He returned hours later, three abalones in tote. They were heavy in my hands, the shells beautiful. 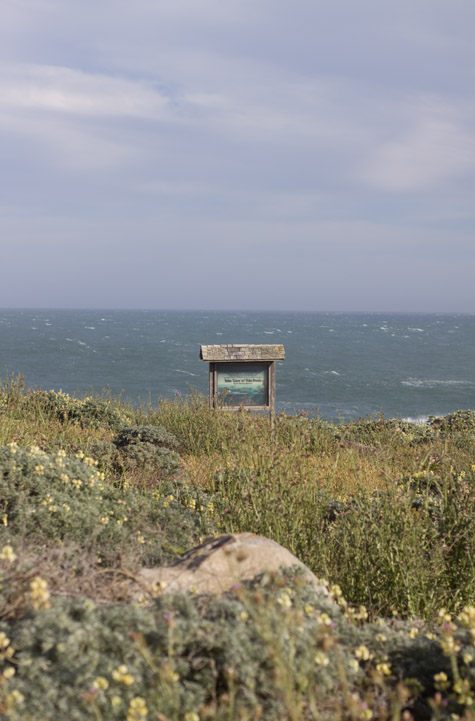 In addition to the abalone, I also saw: the tiniest yellow wildflowers, no bigger than a pencil eraser; plenty of opportunistic blue jays; a group of teens celebrating their junior high graduation with a camping trip; seals lolling around on rocks; chubby yellow birds that lived in the cliffs and flew like bumble bees; an old Russian fort (!); patches of California poppies; a million stars against a black moonless sky. 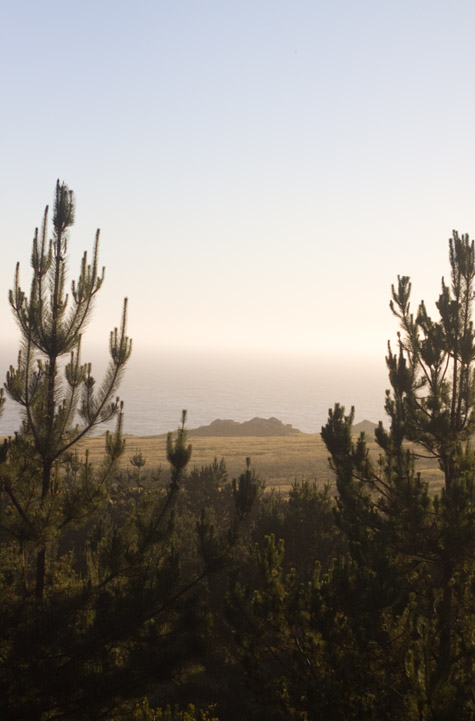 We pitched the tent so it would face this lovely meadow (below). This was at sunset on the first night we were there. 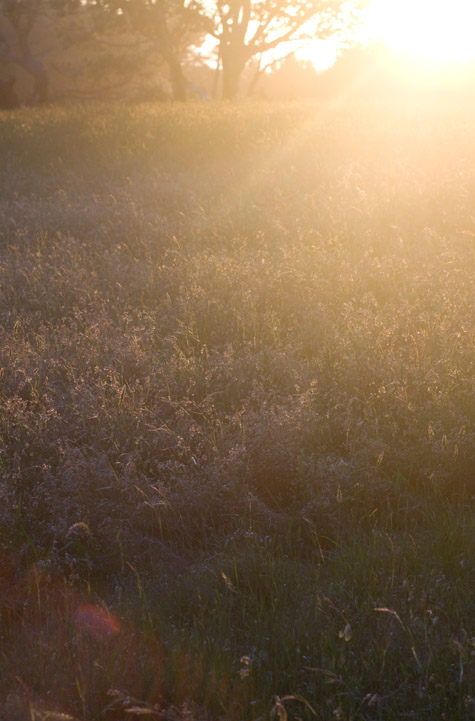 As a side note, I should mention, for the second night I pre-cooked a bunch of soba noodles, then made a cilantro-serrano dressing with the mortar and pestle. We grilled tofu at the campsite, and tossed it all together. This worked out nicely - let me know if you're interested, I can post that recipe (and more pics) if you want. It would make a nice mid-week lunch as well.

If you try the soup, I hope you enjoy it. It has a bit of an ingredient list, but you can tweak it based on what you have on hand. For example, if I had carrots, I probably would have used them. Later in the summer, I might use fresh tomatoes in place of canned. I based the pistou on Paula Wolfert's recipe. Well, her recipe and what I had on hand at the time. Her pistou calls for grated tomatoes, and grated Mimolette or aged Gouda, I riffed on it with canned tomatoes and aged Gouda. Either way, delicious. We've been enjoying the leftover spread on thick slabs of grilled bread.

I made this soup in late spring/early summer. I'd encourage you to substitute vegetables based on whatever is seasonal at the time. Also, I had flageolet beans, but you could substitute other small white beans. Gluten-free readers can simply leave out the pasta, or use a GF pasta.

In your largest soup pot heat the oil, then add the onions, leeks, and celery. Saute for about 5 minutes, then stir in the soaked beans and 12 cups water. Bring to a boil, dial back to a simmer, then cook for about 15 minutes. Reserve one of the tomatoes for the pistou, then stir the remaining tomatoes into the pot, then the potatoes. Cook for another 15-20 minutes, or until the beans seem like they are nearly cooked. Add a bouillon cube if you like, then the pasta, and simmer for 5 minutes. Add the zucchini and the chard stems and cook for another 3 minutes. Stir in salt - perhaps less if you used a salty bouillon - essentially, you want to salt to taste. At this point the pasta should be cooked through, as well as all the beans and vegetables. For the soup to taste good, you really need to get the right amount of salt in it - just be mindful of this, and adjust if needed.

While the soup is cooking, you can make the pistou. I use a mortar and pestle, but you can use a food processor if you like. Pound the garlic with the salt into a paste. Add the basil a handful at a time and pound and grind until nearly smooth. Add the tomatoes, then gradually stir in the olive oil a bit at a time. Stir in the cheese, then chill until ready to use.

Ladle soup into bowls and top with a generous dollop of pistou.

I just made this. I messed up on the ingredients a bit (fewer onions and leeks) and used a light (15%) Gruyere. It was sooooo delish! I can't wait to have more for lunch tomorrow.

I love pistou! This looks wonderful. And if you don;t mind posting that soba noodle and grille dtofu recipe, I would love to see it! It sounds so yummy!

when i first saw these photos i exclaimed to my boyfriend "that looks just like mendocino!" and low and behold it certainly was, or close enough to it anyway. i was proud of myself for recognizing the foliage and coastline as that of northern california - i've only lived here a few years and have taken only a couple trips up the coast. it is lovely and your photos capture it so well! thanks for sharing! oh and the soup looks scrumptious as well!

We just came back from our first camping trip in years. I had forgotten what a wonderful experience it is. This soup looks amazing! I will have to give it a try.

I love Paula Wolfert's Moroccan cookbook (Couscous and Other Good Food From Morocco) and am curious to try other Wolfert inspired recipes. Yum. :)

More gorgeous photo's, Heidi! I have never enjoyed camping - I love beds, linen and hot water! However, on summer weekends I now find myself sleeping in the back of a horse float in a paddock full of horses and rising at 6am to plait a horses tail!! My youngest daughter has taken up polocrosse ( think lacrosse on horseback) and tournaments take us all over the state. Who'd have thought ...?

I love the look of this recipe! It is just what I need. Thanks!

I would love to see the recipe for the udon noodles and cilantro sauce! The photos are outstanding! Susan

I bet the soup tasted better eating it on the coast. One of my first food memories is eating beef stew while camping on the Oregon beach when I was about 5 or 6 years old. Salt air makes everything taste better. Kathleen

We went camping a few days ago, as well, on the west coast of Vancouver Island (the Juan de Fuca trail). We had our first ever encounter with 3 black bears who sent us 5 hours backwards to our campsite from the previous night (there was no way around them). But we just wanted to do some long hikes and weren't too concerned about direction. Since we were hiking 7 or so hours a day for three days, I had to pack foods that weren't too heavy so I made some bean protein bars, healthy cookies and muffins and some dried fruit. The water is pretty clean up there so we just drank from streams (we filtered it just to be safe), which saved us a lot of weight. Camping season is here!

Loved the pictures and recipe.

I know EXACTLY where you went camping (SoCo)! It's just north of where I grew up. I miss it so much! This soup looks like it would go well with the 6-seed soda bread. You've been providing many of our meals the past couple of weeks. Thanks!

please do post the grilled tofu recipe! and, the camping looks wonderful...thanks for your fantastic recipes and blog...am a big fan, and the recipes keep my newly-vegetarian husband happy (and hence, me happy!).

Great pictures, and recipe. My only comment is that the Kotex advertisement is very unappetizing just in the middle of a recipe. You may want to make a change there.

Oh, these pictures bring back memories of driving my bug in high school. We'd drive from Santa Rosa to Whales Head(just outside of Bodega) every weekend, fog or sunshine. Your writing really captures the overall tone of that region. Thanks for conjuring that for me. I, too would like that soba recipe.

yummy soup....and beautiful landscape. sometimes i want to immediately move to the west coast. heidi, i would love it if you posted the soba recipe, and more pictures. thanks!

This is a great soup recipe for the coming abundance of late summer gardens, and it looks like it's more than enough to feed a band of happy weeders, too. Thanks!

I just love your blog/site. I often turn to it and enjoy getting updated through my email. Just thought I would tell you I appreciate you sharing your life and recipes. xxxooo - D

Beautiful post Heidi. Thanks for sharing! Have you been camping along the Big Sur Coastline yet? That is my personal pick for most beautiful spot in the US. :). Thank you for this delicious soup recipe, and please definitely post the soba noodle one! Can't wait :).

Beautiful post Heidi. Thanks for sharing! Have you been camping along the Big Sur Coastline yet? That is my personal pick for most beautiful spot in the US. :). Thank you for this delicious soup recipe, and please definitely post the soba noodle one! Can't wait :).