It's not everyday that you find yourself on a sun-kissed terrace in Argentina looking out at a few stray clouds dancing around the tip-tops of the Andes Mountains. It is the best kind of theater. I found myself standing, and staring, and then letting my eyes come back to close range when someone generously offered me a bite-sized treat. A small cracker topped with what looked like zucchini relish, a tiny kiss of creme fraiche, and a couple flecks of black pepper. I reached toward the platter with the hand that wasn't holding a crisp glass of Chardonnay. The crostini had a pronounced lemony tang, and the snap of the cracker played nicely with the relish-like toppings. This was the start of what amounted to a wonderful meal with both old and new friends at Bodega Ruca Malen in Luján de Cuyo. This version is a "broad-strokes" recreation based on my (somewhat) hazy memory, and a nearly illegible scribble in my notebook. The scribble said - cracker, zesty saute of apple and zucchini, creme fraiche, pepper. I got a third hand account of the ingredients when I was there (chef --> waiter --> friend --> me), the culinary version of telephone. I used thinned out goat cheese and in addition to that I'm sure I have other ingredients in this version that weren't in the original, and one or two that might have been in the original that escaped me. Anyhow, this version is going to be a keeper and might very well (finally) dethrone the lentil and goat cheese crostini I've done to death. The apples and zucchini paired nicely with the un-oaked Yauquen Chardonnay we were drinking, which in turn paired perfectly with the idyllic, mountain-framed sunny skies. Here's a photo Wayne took of me as I was waiting for a taxi to pick me up and take me to the airport. I also uploaded a little snippet of video to You Tube. Here you can see what the Andes Mountains look like just after sunrise, on a clear day, as our flight crossed from Santiago, Chile to Mendoza, Argentina. Watch it in high-quality if you can.

Be sure to get your bread nice and toasted and assemble as close to serving time as possible. You can certainly do the components ahead of time, but the delayed assembly fend off any sogginess of the cracker. I love love the zucchini apple component, it's a late summer relish of sorts and I might even use it in another recipe I have in mind later this week. Feel free to make a larger batch of it and use it on goat cheese tacos, in salads, as an omelette topping, etc, etc. And as far as size goes - I made these a bit too small 1-inch bites would be perfect and these we just shy of that.

Preheat oven to 350 degrees. Cut the bread into bite-sized pieces (or use a cookie cutter), brush with a bit of olive oil and sprinkle with a tiny bit of salt. Arrange in a single layer on a baking sheet and bake until golden, roughly 14 minutes, flipping once along the way. Remove and let cool.

In the meantime, whisk the goat cheese in a small bowl with just enough milk to make it fluffy, light, and easily dollop-able. Spoon into a piping bag, or alternately a small plastic bag with just a bit of the corner cut off) and set aside in a cool place.

To make the zucchini-apple component, heat a splash of olive oil in a skillet over medium high heat. Stir in the salt and the apples. Saute for about 15 seconds and then stir in the zucchini. Cook for another 15-20 seconds - things should really be sizzling. But keep in mind, you only want to heat and soften things up a touch, not turn everything to mush by overcooking. Quickly remove from the heat and stir in the lemon juice and a tiny drizzle of extra virgin olive oil. Toss and taste, add a bit more salt if needed. Transfer the zucchini mixture to a large plate to cool a bit.

To assemble take one piece of the toasted bread and spoon a small amount of the zucchini mixture on top of it. Squeeze a little bit of the goat cheese on top of that and a few flecks of black pepper. Repeat and arrange on your favorite serving platter. 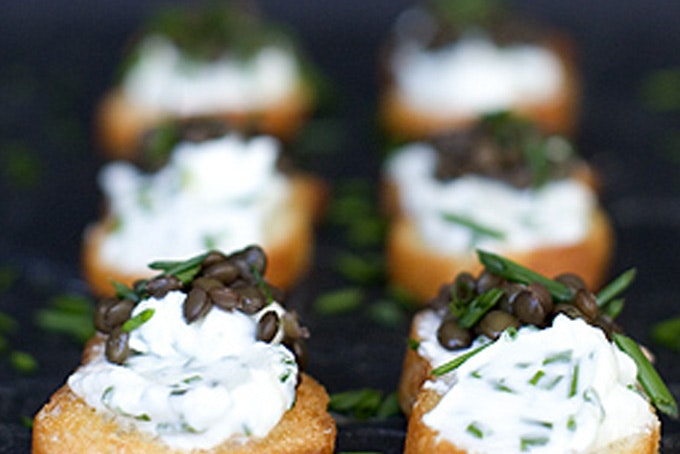 This has become one of my favorite crostini recipes - goat cheese, black beluga lentils, and chives on garlic-rubbed crostini.

I love the late summer vegetables--I have much, much zucchini to use, but want to preserve some for the non-zucchini days. Any thoughts on how the relish would stand up to freezing (and later thawing to serve)?

Heidi, I agree with Sam, you look *very* stylish. but - I have to laugh - you also look completely bundled up! I forgot that SF is soooo cold in the summer ... :-). Pam in NoVa - where it's warm, sunny, and most unusually, NOT HUMID

This is really interesting - I wish I'd seen this yesterday! I think the apple and goat cheese would match really well together.

I was wondering, what did you use to cut your bread into the bite-sized pieces? The edges are beautiful.

Intriguing. That sounds like a lovely balance of flavors. I'll have to try these for a tasty snack. Thanks, and I agree with the others, you look quite glamourous when you travel. You put my yoga pants to shame.

I just love little food! Thanks for the idea

Heidi - you look so stylish when you travel. I am usually too stressed to pull together anything that looks even half as cool. xx sam HS: Hah. Thanks Sam - you know, I'm never convinced my luggage is going to make it to my final destination, so I try to wear something nice enough that I could wear it out to a nice dinner (and the next day) if needed ;)

Mmm... Sounds good, it looks good because of color and it really catches my eyes!

These are adorable - and they look so tasty too! Great appetizer!

That looks so healthy and delicious! This would a great appetizer or light lunch.

How delicate and beautiful, and such an unlikely combination of flavors atop a crostini!

Precious. I have no patience to make little things myself, but love to look at them :-)

Michelle @ What Does Your Body Good

What a beautiful and talented woman you are..I am so jealous! These are on my Christmas definite list. Thanks XX

This solved my debate over what to bring to a pot luck tomorrow. Thank you! It looks so delicious. :)

Heidi, pardon the tangent post, but I'm curious about the Mamiya 645 that Wayne used for your portrait shot. I'm impressed with the sharp-yet-smooth quality of the photo. Is that a digital shot, or a film shot scanned to your computer? HS: Hi Mike. I'm not sure what film stock he is using there, but it is film that he then scanned. If you are curious about more of the specifics just leave him a note on Flickr - he's usually pretty good about responding. -h

They make a beautiful crostini! I am so loving your flavor combo.

Wow. That sounds BEAUTIFUL! And the crostini sounds delicious too. I'm jealous of what you've seen and eaten! :)

Cheese and apple is one of my all time favourite combinations. Will definitely be using this recipe very soon. If you enjoy that scenery Heidi, I bet you would enjoy New Zealand too, because that is the view most of my friends have from their windows at this time of year.

I just love little food! Thanks for the idea!