The way I approach cooking generally falls into one of two camps. Often I have an idea of what I want to make, and I simply set out to realize that. Other times I like to follow the lead of another cook or chef. Put myself in their hands completely. When it comes to the latter, I find myself combing cookbooks and magazines looking for recipes highlighting unexpected, interesting flavor combinations or techniques. I look for ideas and approaches that are new to me, or ways to use an ingredient I'm not particularly well versed in. I often turn to books that have strong roots in a specific place or in a traditional cuisine. This is a practice I try to keep up a couple times a week, and I have to tell you, the rewards can be great. This soup is a prime example. It is from Rick Bayless's Mexican Kitchen, a book originally published nearly 15 years ago. The soup is a fascinating pairing of a dried fava bean and roasted tomato base topped with a cider-kissed tangy/sweet quick-pickled chile topping. The topping calls for Mexican oregano, fresh cilantro and spearmint, and the green notes balance the earthiness of the chiles. Easily one of the best, most interesting soups I've cooked in years. Aside from discovering a great recipe like this in Rick's book, one of the other things I really appreciate is the way he always provides alternate suggestions for recipes. He often includes vegetarian suggestions, shortcuts, and suggestions for advance preparation. For example, he includes a few lines about how do a Moroccan inspired version of this soup by omitting the chiles and incorporating saffron, ginger, and chile flakes. He also includes a version with huitlacoche and mint.

I rewrote the original recipe to reflect a few minor tweaks I made. The most significant, using dried guajillo chiles in place of dried pasillas and using my broiler to cook the onions and tomatoes.

Rick's recipe called for dried pasilla chiles, but I had guajillo chiles on hand, so that is what I used - delicious. And for the vegans out there - simply skip out on the cheese.

Make sure the dried fava beans are clean and free of dirt. Place in a large soup pot and cover with the broth. Simmer over medium-low heat, partially covered, until very tender, about an hour. The beans should be starting to fall apart at this point.

While the beans are simmering, roast the garlic in a heavy skillet over medium heat, turning occasionally, until you get black spots all over, and the cloves have softened up - about 15 minutes. Cool a bit, remove the papery skins, chop finely and set aside. Now, you'll want to caramelize the onions a bit as well. I used my broiler, but you could also do it in a dry skillet or on a grill. In this case I placed the onions in a single layer, on a rimmed baking sheet, about 4-inches / 10cm under a hot broiler for 4-5 minutes on each side, until soft and deeply browned. Cool a bit, peel and finely chop. Use the same pan under a hot broiler to roast the tomatoes until blackened on one side, six minutes or so. Flip, and roast the other side, another 6 minutes. Cool a bit, then peel and chop, saving all the juices.

Add the garlic, onion, and tomatoes to the fava beans and simmer until the beans are the consistency of a coarse puree, 15-30 minutes.

While the soup is simmering, cut the chiles into confetti-shaped flecks using scissors or a sharp knife. Heat the oil in a small saucepan over medium heat. Add the chiles and stir for a minute, then remove from the heat. Add the vinegar, 3 tablespoons of water, oregano, and 1/2 teaspoon of the salt. Set aside and let stand for at least 1/2 hour, stirring occasionally.

Just before serving, add enough water, if necessary, to bring the soup to the consistency of a medium-thick bean soup. Let the soup come back up to a simmer, remove from heat, then stir in the mint, cilantro, and another teaspoon of salt. Taste, and add more salt if needed, but keep in mind the cheese is salty as well. Serve with a dollop of the chile mixture, sprinkled with a bit of the cheese. 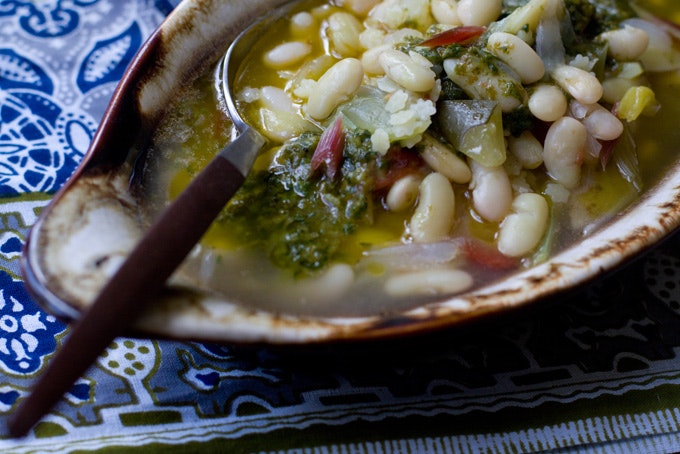 A soup I made for a camping trip to the Sonoma coast - lots of beans, vegetables, and stellette pasta. Tiny stars under the stars, with a good dollop of pistou for each bowl. 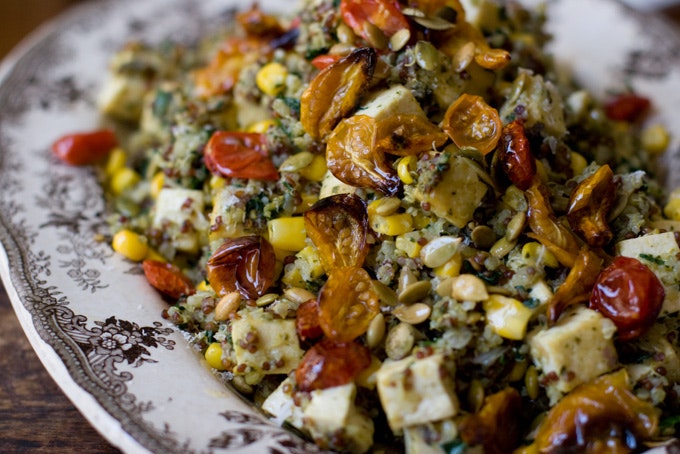 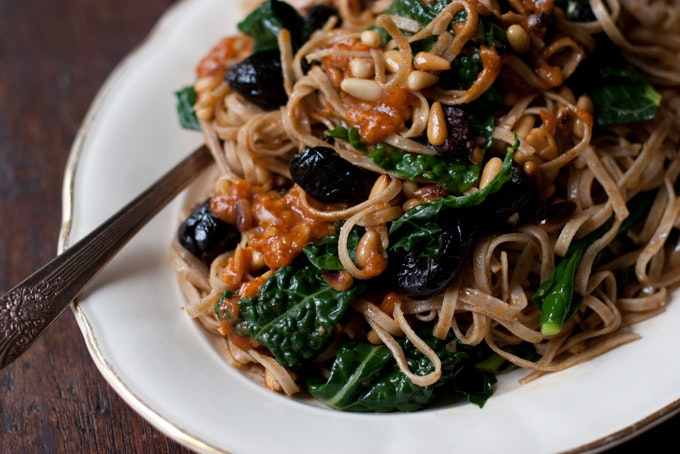 I'm such a huge lover of soup. I can eat soup for breakfast, lunch and dinner :-) This one looks interesting! Do you think I can use black eyed peas or pinto beans instead of fava?

Can't wait to try this--I'll have to keep an eye out for dried fava beans.

Oh, I'll have to try this! I went through a good 2 months this summer where I was obsessed with Rick Bayless's Mexican Kitchen. I had been watching his TV show, and when I heard he was doing a book signing a couple towns from me, I decided it was time to get a Bayless cookbook. I don't know how I skipped past this soup. I remember making one of his soups (mushroom and nopales, I think), and it was fantastic! I'm interested to try a new one. And guajillo chiles? Yum!

Nice! I spotted dried favas at the market recently - and now I know what to do with them! Might try it with the dried mulato chiles I have in the pantry. Sounds like a great combination.

Oh, this sounds delicious and layered with flavors! I have shied away from Rick Bayless' recipes in the past due to their complexity, but look forward to trying this one due to your added guidance. Thanks!

Can you suggest an alternative to fava beans? I love them but my daughter is allergic. The flavors sound wonderful!

I have had Rich Bayless' book for years along with a couple of Diana Kennedy's books.. They are excellent books.The combo of beans and chilies always is a great flavor combination and with Fall coming, simmering beans sounds fabulous. Pasilla and guajillo are great addition in stews and chilies, also.

funny, i have that cookbook sitting next to me on the table right now! i'm making his tomatillo serrano salsa this morning. i love this cookbook but haven't made that soup. it sounds delicious and i'll have to try it soon!

This reminds me of one of my favorite soups in years, a lentil with a slap of aleppo, mint and yogurt sauce. It amazes me when flavors can still be combined in brand new ways (which is to say, old longstanding ways which I'm just now stumbling upon). I've had this book all these years and never noticed this recipe. So pleased you brought it to my attention!

I'm a huge Rick Bayless fan! Mexico, One Plate at a Time was one of my first cookbooks! I think he's from Texas, which is another reason I like him :) Anyway, this looks delicious! I can't wait for slightly cooler fall temps so that I can make it! Your soups are always amazing. I've made all the ones from SNC at least 10 times each!

Oh man, soup has been on my mind all week. It is just now becoming that time of year. I can't wait to try this, thanks!

This looks so good. I need soup today, it's so cold outside :(

Love this soup - I've been making it for years, but never keep track of the tweaks I've made along the way. Can't wait to try your version with the dried guajillos and roasted tomatoes!

I am so ready for soup-weather. This stirs some excitement in me!

I'm not a fan of soups, but this sounds like something I could get behind. Is there any way of using fresh jalapenos or serranos? I have a ton of them. I also wonder if the roasted tomato would freeze well enough to make it now and have the soup when it gets a bit colder.

You always have the most interesting recipes with ingredients that I've not heard of before (like Mexican queso anejo). :) I'll have to put this on my list of soups to try!

Tabitha (from single to married)

Ooh, this sounds like a great book to seek out for my collection. I haven't seen any dried fava beans in my local stores but will have a good hunt around because this soup sounds delish!

Wow, this sounds fantastic! Rick Bayless is a genius, so I imagine you can't go wrong with his recipes. What sort of vegetable broth did you use?