I thought it might be fun to highlight a few vintage cookbooks in the coming months. I pick them up here and there, without much rhyme or reason. There might be a design element I like, it might be the voice of the author, or sometimes a single recipe pops out at me. I typically flip through them in antique shops on road trips, at yard sales and flea markets, but I found this gem at Omnivore Books here in San Francisco - The Seasonal Kitchen: A Return to Fresh Foods. Published in 1973, it is by Perla Meyers, was published by Holt, Rinehart, & Winston, and designed by Al Corchia. I did an updated take on Perla's Fennel Mushroom recipe for today's post, it's a simple, brilliant twist on everyday sauteed mushrooms with dill, chives, fresh fennel, and a kiss of creme fraiche. 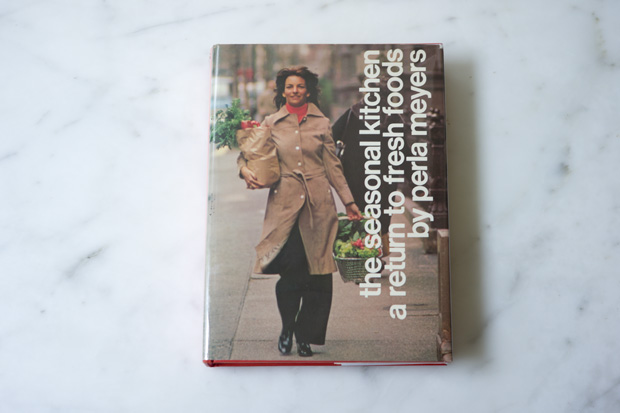 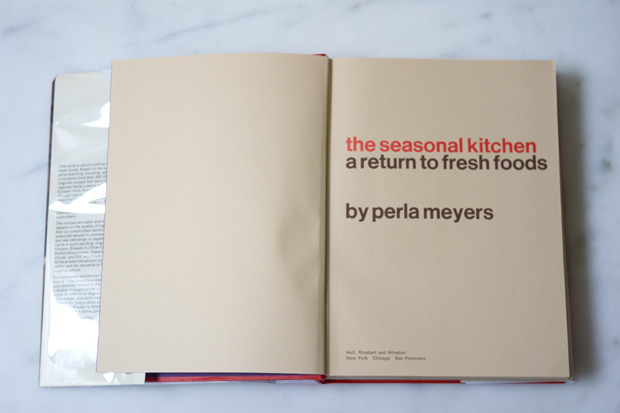 There are so many things that resonate with me in this book - subject matter, design, the emphasis on fresh, seasonal ingredients. More than anything, I love the approachability of Perla's voice. She opens the book by saying, "Of all the reasons I have for writing The Seasonal Kitchen, the most important is to communicate and understanding of freshness and encourage a return to seasonal cooking. This is not a book for organic-food buffs, however, but for anyone willing to explore and rediscover the marvelous potential of fresh food." Remember, this book was published nearly forty years ago. In many ways it reads like it was written yesterday. 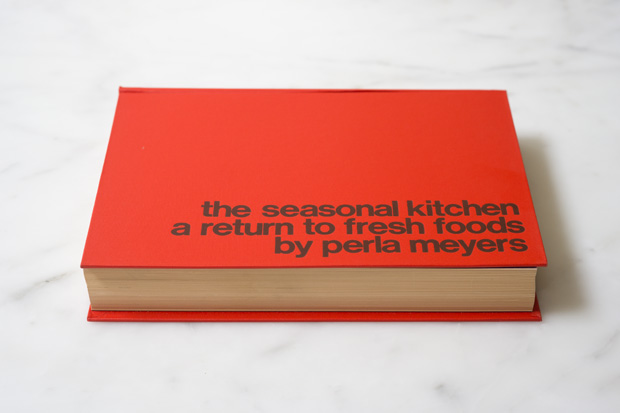 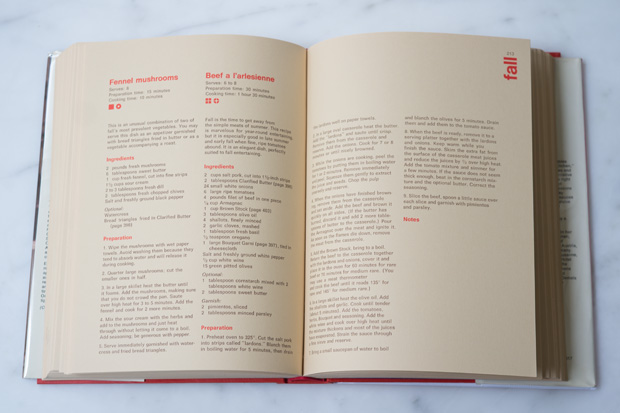 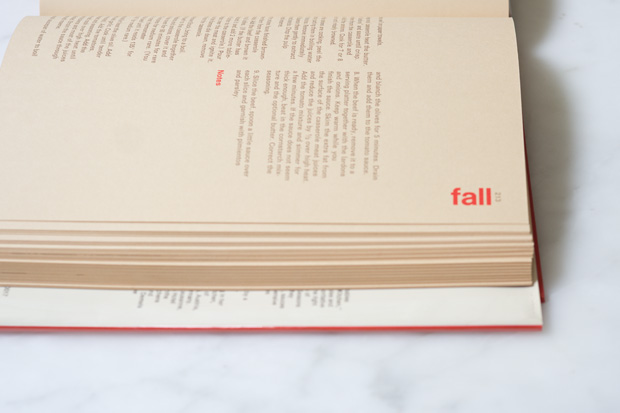 You just don't see cookbooks that look like this today. Even better, the ideas behind the recipes are straight-forward, produce-centric, and easy to update. To make these mushrooms, I replaced a substantial amount of sour cream with a dollop of creme fraiche, and never missed the former. And I give a few suggestions related to serving them in the head notes below.

This book was a real find, the sort of discovery that keeps me digging through stacks of books, but I'm certainly not the first to sing Perla's praises. Perla Meyers elsewhere:

The mushrooms are great on their own (as pictured), spooned over a thick slab of grilled, garlic-rubbed bread, or over a simple baked potato. They make a fantastic tart or sandwich filling, and would be great as a component in a simple fall panzanella. I used nameko mushrooms here, a favorite from my farmers market, but brown mushrooms will work brilliantly as well. To clean mushrooms use a damp paper towel to remove dirt.

Cut mushrooms, if needed, into 1/3-inch thick slices. The mushrooms I used, up above, we're mostly left whole.

In your largest skillet, over high heat, melt the butter. Add the mushrooms and a few pinches of salt, and use a spatula to stir until coated. Saute, stirring every minute or so, until the mushrooms release their water and brown a bit - 4-5 minutes. Two minutes before the mushrooms are done cooking, stir in the fennel. When finished, removed from heat, wait ten seconds, and stir in the creme fraiche. Add most of the dill and chives, pepper and more salt if needed.

Inspired by the Fennel Mushroom recipe in The Season Kitchen, by Perla Meyers, published by Holt, Rinehart, & Winston in 1973. 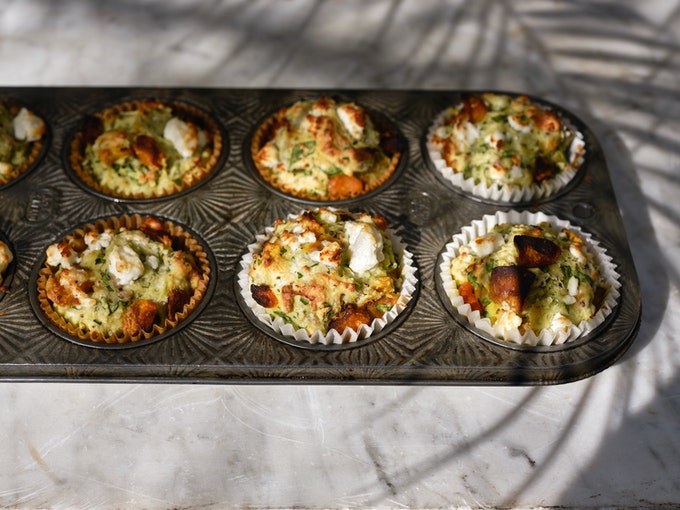 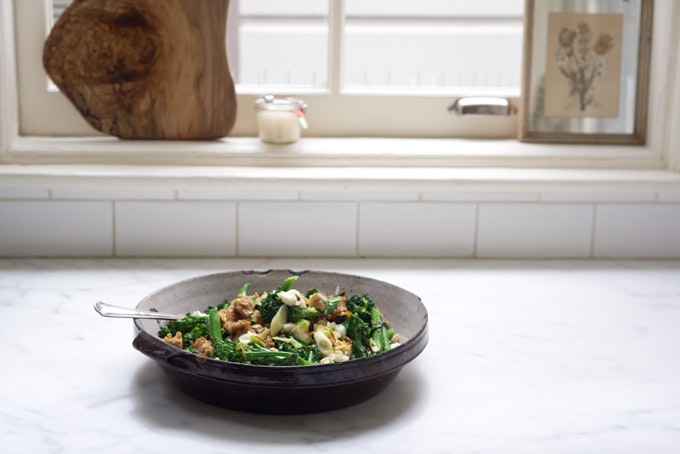 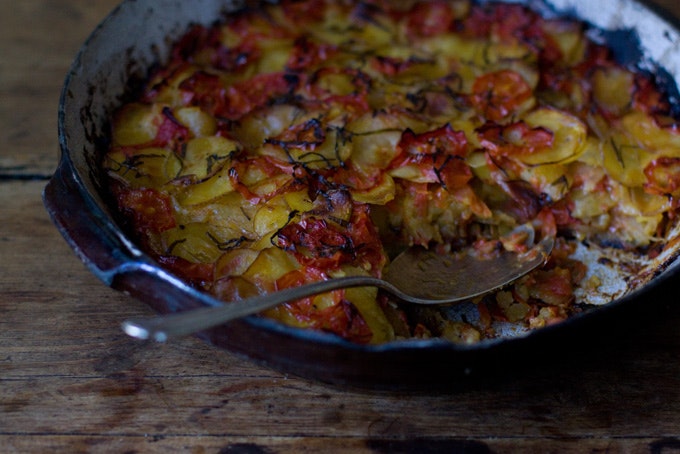 In a Indian spiced departure from a favorite Suzanne Goin recipe - this is a rustic, deeply flavorful summer gratin made with sliced tomatoes, potatoes, caramelized onions, curry powder, and a kick of red chile flakes.

I love this book! It was the first cookbook I bought for myself, way back in 1973 or '74 I think -- in my first year at university. My parents entertained a lot, partly because of my father's line of work, and I often helped my mother in the kitchen. Many of Perla Meyer's elegant recipes were very much enjoyed by their dinner guests. It is still on my bookshelf -- alas, minus the lovely dust jacket.

I've had this book for decades - since 1975, no doubt, when the paperback was issued. It was highly praised at the time, and my own flyleaf note says "this is a wonderful book". Thanks for prompting me to dig it out!

What a great find! I should keep my eyes peeled for vintage cookbooks. The recipe looks good and simple.

The recipes don't age but sometimes the writing does. I just bought a Betty Crocker book from the early 60s (one my mom used when we were young) and the tips and tone of it are jaw-droppingly dated. I love mushrooms and often crave them. Your recipe looks perfect.

I absolutely LOVE finding old vintage cookbooks. I have this faded green one on a cookbook shelf in my kitchen. However, I have it bookmarked to the OPOSSUM STEW. That's embarrassing.

That recipe looks phenomenal. And the design of that book and the cover? Oh man oh man!

Since it's fall, I've been choosing a cookbook from my collection every night to read in front of the fireplace. Even if I've had a book for years, I always find something new that speaks to me! Love this :)

How neat! It just goes to show you that all new ideas are old, in a way. You've inspired me to go digging through the stacks at some of the vintage bookstores here in Paris to see if I can find some gems.

I adore vintage cookbooks. That one is quite a find - the book design is beautiful! xox.

Is there a good vegan substitute for the creme fraiche here?

I admit, that cover rocks. She is STYLIN'!

yes, it seems incredibly forward thinking for 1973. Just her clothes and the colour-tone of the front cover that give her away.. : )

Really love the idea of this series and I can't wait to see what you come up with.

This is such a flavorful salad. Would love all the textures too. Can't take my eyes away from the picture :-)

Never heard of Perla Meyers before and I just realized that I've missed a lot. Thanks for signaling this; I'll make sure to catch up asap!

What a great cookbook. Nice find! I love fennel, so much! It's so under-rated I find. I wish more people knew how fabulous it was! This looks great!

Some things you just don't need to mess around with. That message seems to resonate through with this type of cooking. This would make a great bruschetta topping!

Vintage cookbooks are a great find and make you realise that all the ideas about cooking we think are new have been around for ages. I love the design inside the book with fall written in the corner. Fennel and mushrooms is a combination I've never tried, great idea!

Your photography is beautiful, as usual.

I've always got my eyes peeled for a special vintage cookbook, so this post is right up my alley. My latest find was The Edible Mushroom by Margaret Leibenstein, published in 1986. The freshness of fennel and earthiness of mushrooms is a combination that never goes out of style. Great post!