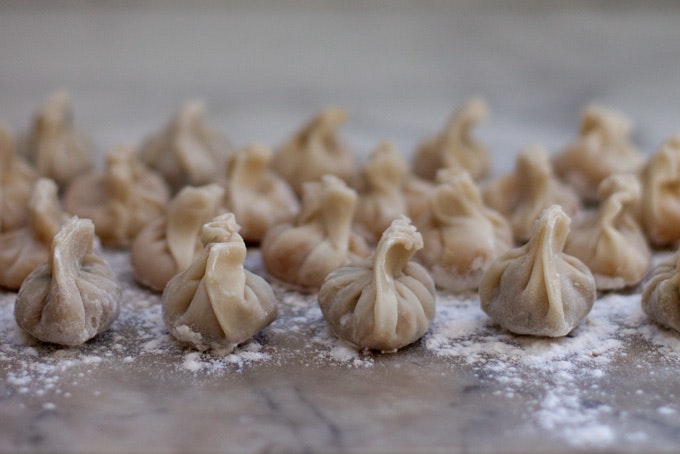 I'm writing this post from 35,000 feet. We're rocketing through the clouds at 550 m.p.h, the wilds of Canada are below me, and I'm wedged into my seat on a nine hour flight. London is the destination, my hit list is long, and I've got some good stuff to eat tucked under my seat right now. I was on a bit of a dumpling bender leading up to my departure. In part, because I knew I wanted to pack a luck box full of them for the marathon flight.

Let me start off by saying, these aren't traditional in any way. I've simply cobbled favorite aspects of different dumplings I've loved, in the past, into this version. Caramelized shallots (or onions) and pureed yellow split peas make the filling. They somewhat resemble momos in shape. And I tend to serve them nestled deep into a bed of arugula (when I'm not on a plane) in an attempt to get some greens in the mix.

I'd argue, these dumplings are the distant (west coast?) cousin of these. My favorite dumplings ever. Today's recipe, my friends, is the slacker's version. I didn't make the wrappers from scratch. I use the folding style that comes most natural to me (basically, crimp & pinch), I use yellow split peas because I always have them on hand. And, because I love the golden, crisped footprint you get with the potsticker cooking method (instead of steaming) that's how it goes down. So here we are.

Just so you know - there are a couple simple components at play here. You make a scallion oil, to drizzle. There's a chile-spiked, salty sweet dipping sauce, and then the dumplings. Before cooking my airplane potstickers, I cooked a plate for Wayne to take to a birthday picnic the other day. Up above you can see what that looked like - served over a bed of arugula, sprinkled with toasted sesame seeds, drizzled with the sauces. Easy finger food. 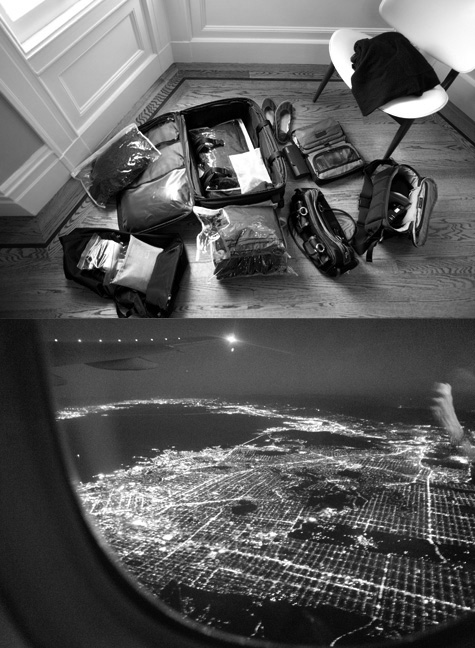 I know a number of you were curious about my carry-on packing. Here's a shot of everything going with me (sort of hard to see though). As well as a beautiful shot from the sky. Just after take-off our pilot banked north, then east, through the Golden Gate. We flew directly over San Francisco, and if you look, you can see the big darkened square mid-right - Golden Gate Park. And the dark patch at the bottom - the Presidio. It was a real treat and a spectacular way to start the trip. xo -h

I use yellow split peas here, but you can swap in green split peas, mung beans, or lentils if you like. They won't have a gold filling, but...You can also steam cook these, or poach them in a thin broth.

Start by making a scallion oil. Heat the oil in a small skillet or saucepan over medium-high heat. When hot, add the onions and stir well. When they soften, after about 30 seconds, remove from the heat. Set aside. Note: You can refrigerate this for later use, but bring to room temperature before using.

Make a dipping sauce by sprinkling the chiles with sugar. Chop and smash a bit with a knife. Place in a jar or small bowl, add the soy sauce and water, and stir to combine. Taste and adjust to your liking - more sugar, water, etc.

To make the filling, in a large skillet, fry the shallots in the sunflower oil over medium heat until golden brown, 5 minutes or so. Sprinkle with salt, and stir in the yellow split pea meal. You want to stir until the shallots are evenly distributed. And you want the filling to hold together if you pinch a bit between your fingers. If it's too dry, work in water a small splash at a time. Now give it a taste - you should want to eat it straight, if not tweak with more salt until you do.

Now, fill and shape the dumplings. Very lightly dust your counter top with a bit of flour. Place 12 wrappers on the floured countertop, and add a small dollop of filling just off-center of each dumpling. Run a wet finger around the rim of each wrapper, press the edges together well, and try to avoid trapping air bubbles in the dumplings if you can. Crimp each dumpling, and gently press it down against the counter to give it a flat base, so it sits upright. This base is also what gets brown and crunchy - one of the things you're after. Repeat until you run out of wrappers or filling. Place the dumplings seam side up on a well-floured plate or baking sheet. The extra flour that sticks to the base gives extra crunch.

At this point you can freeze any dumplings you know you aren't going to cook.

To cook the dumplings, heat another scant tablespoon of oil in a large skillet over medium-high heat. Arrange dumplings in the pan, seam side up, with a sliver of space between each (so they don't stick together). Pan-fry until the bottoms are golden, a few minutes. With a large lid in one hand, carefully and quickly add 1/3 cup / 80 ml water to the pan, immediately cover, and cook the dumplings for a few minutes, or until the water is nearly evaporated. Uncover and finish cooking until all the water is gone - another minute or so. Dial back the heat if the bottoms are getting too dark. Cook in batches, and serve drizzled with the scallion oil and spicy soy sauce.

Makes a big platter of dumplings. 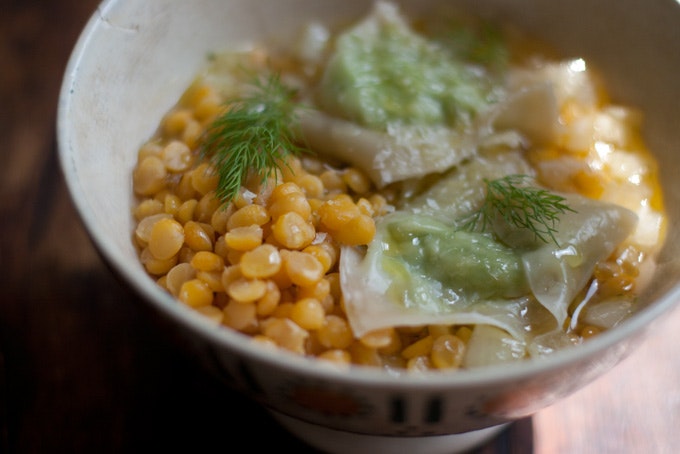 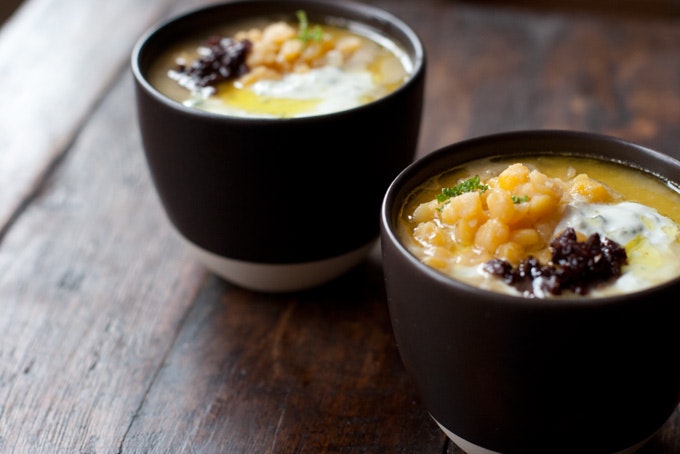 Healthy, beautifully textured, and colorful this split yellow pea soup makes for a terrific lunch. The yellow split pea soup base is topped with a tzatziki-inspired yogurt dollop, a touch of mint, a spoonful of finely chopped black olives, and a drizzle of olive oil.