Certain people have a thing for salt & vinegar potato chips. Ok, let me be more specific. Certain people in this household have a thing for salt & vinegar potato chips. I'm not one of them. Tangy, salty, crisp potatoes - I get it. On paper it all sounds good. I don't know what my problem is. But I have a really hard time with these chips. I find the vinegar flavor blindingly strong, and despite my best efforts to resist, they make my lips pucker and my face scrunch up. But Wayne loves them, so when I came across a recipe last year for potatoes boiled in vinegar, then grilled to a crisp, I set it aside for grilling season. It sounded hardcore.

Here's what I'll say about them. If you love the whole salt n' vinegar thing, you've got to make these. Surprise to me - I actually liked them quite a bit. And although the vinegar flavor is booming here, it seems to have less of an edge than the chip version. Just before trying them, I sprinkled the tops with a bit of fennel salt (recipe below), but was imagining dunking each potato slab in some garlicky aioli would hit the spot as well.

One of the other things that caught my attention about this recipe (which originally ran in Martha Stewart Magazine), was the idea that you could flavor potatoes by boiling them in a strongly-flavored liquid, before finishing them off on the grill. It got me thinking of all sorts of other ideas - like a really strong herb-flecked broth, or a strong garlic broth, or would a strong beer work?

The original recipe calls for white vinegar. I used a white wine vinegar instead - but you can use either. I suspect you could actually experiment over time w/ different types of vinegar. I used fingerling potatoes that were on the large size, but any waxy potatoes will do.

Pour the vinegar into a medium saucepan, then stack (or arrange) the potatoes so the vinegar covers them completely. Bring to a boil, then reduce the heat and simmer for about 5 minutes, or until the potatoes are just fork tender. You want them to hold their shape, so they don't fall apart on the grill later. Let the potatoes cool in the vinegar for 30 minutes. Drain well, then very gently toss with olive oil, salt, and pepper.

Heat the grill to medium high. Grill potatoes, covered if possible, until golden on one side, then flip and grill the other side - roughly 3 - 5 minutes per side. Serve sprinkled with salt or fennel salt to taste.

*To make fennel salt: toast 1 tablespoon of fennel seeds in a skillet, pound to a powder with a mortar and pestle, then combining it with about two tablespoons of flaky sea salt.

Adapted from a recipe in Martha Stewart Magazine, June 2009 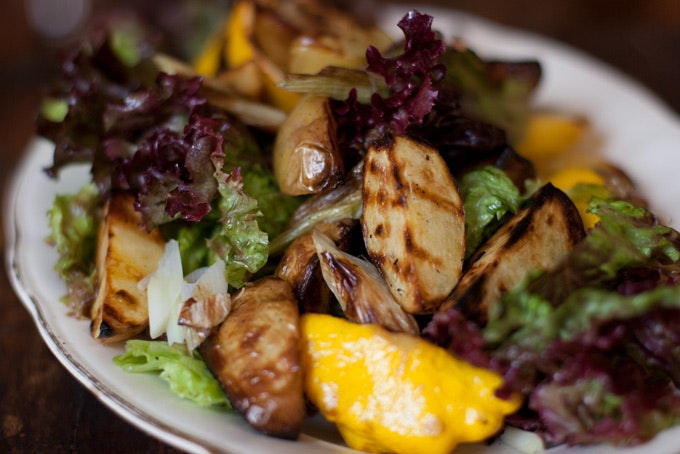 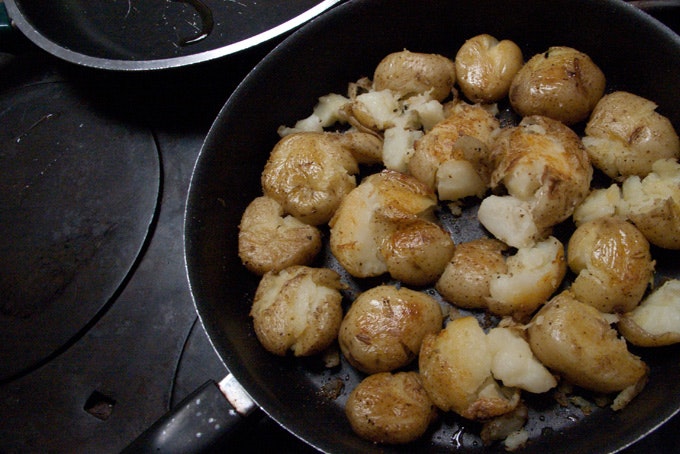 This skillet smashed potato recipe make delicious, golden-crusted potatoes. With a bit of prep you can boil them off (pre-cook) the night before. They come together in just a few minutes just as you are ready to serve the rest of your breakfast or brunch.

I LOVE salt and vinegar. This sounds perfect to me.

I've never been attracted to junk food. As a kid I never went for Ring-Dings or Twinkies or Little Debbie. But - I must confess. Whenever I am in a deli, I will snag a bag of salt and vinegar potato chips. I love them. Yes, they make my mouth pucker too... but in an oh-so-delightful way. Oh, yummy, yummy. So, you know I will be making these - asap - even though my potatoes aren't ready to be dug. And thank you. This will be a more guilt-free splurge ;)

Oh this chips maybe really irresistible! I can imagine how this can replace my mojo potatoes :D

I know what you mean about salt & vinegar chips just being so full on...I don't like them either, but I imagine in this instance that the potato itself might neutralise some of that aggressive vinegar flavour. I remember tasting some potato chips in New York that were dill pickle flavoured and they were really good - a flavour profile along those lines could be yummy too, using a slightly briny, spicy liquid to first cook the potato.....

I love potatoes, but I've never used vinager, I have to try!

What a fun and simple recipe! Heidi - do you think it's possible to broil these in the oven? I don't own a grill (there just isn't enough space in our teeny-tiny SF apartment), but I'd love to try this recipe if there's any way to get around not having a grill. Thanks!

Salt & vinegar is a British institution. You can't have fish and chips without a side of salt & vinegar chips (fries). As a kid we would buy the deadliest salt & vinegar crisps and eat the pack until our lips turned white from the vinegar. Yum! Living abroad now, I miss salt & vinegar anything. These look fantastic and I'm fascinated by the fact that you can flavour the potatoes through boiling them in vinegar.

I am one of those people who LOVE salt n vinegar chips. These look amazing, especially with the fingerling potatoes. Thank you for sharing such a tasty recipe.

did you slice the potatoes before you boiled them heidi?

What a great idea! I can't believe that I'd never heard of this before!!! I like salt and vinegar chips and my husband loooooveess them so this recipe is definitely getting bookmarked!!!

this has my daughter's name written all over it. Will be making it this week for sure!

I adore the salt and vinegar thing, and would adore these. Thank you.

This looks amazing! I LOVE salt and vinegar potato chips and think I'll need to try it asap.

hello heidi, hmmm. i'm not particularly partial to salt & vinegar chips either, but this got me really interested. this reminds me of a recipe that tells you to cook potatoes in water along with sprigs of fresh mint, which resulted in the spuds subtly flavored with mint. might have to give this one a try, too!

My dad used to make potatoes that looked just like those and he called them 'potato planks'. Nothing as fancy as yours but yummy just the same, as they were fried in bacon grease.

That is a fascinating method and recipe! Salt and Vinegar chips are my boyfriend's favorite, and I'm sure he would love these.

Your introduction really got me on this one. My boyfriend LOVES salt and vinegar chips. One of his favorite meals is a tuna salad sandwich (with mustard and pickles) and a S&V chips. Just the thought of all that makes my face hurt. I will definitely be making these, especially since you said you liked them too!

These look much better than fries...and I bet the taste wonderful too! :)