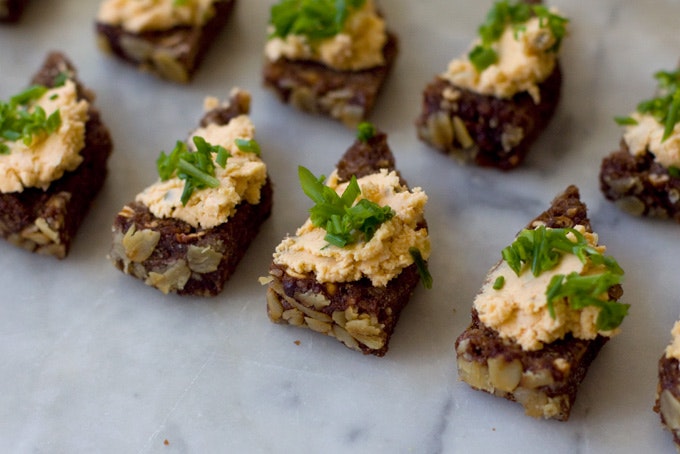 I decided to make something new for my signing at Omnivore Books a couple weeks back. Something tasty, tiny, and a little off-beat. I've been stuck in a bit of a crostini rut, and tend to make little goat cheese crostini with yellow split peas and chives anytime I want to avoid the use of plates or utensils. People love them, they're bite-sized, and you can make the components ahead of time. That said, I thought it was time to expand the crostini repertoire and I started thinking about doing a version with black bread and liptauer cheese. For those of you unfamiliar with liptauer cheese, its typically a paprika-kissed, cheese spread punctuated by things like capers, pickles, caraway seeds, mustard, onions. Spread across a slab of dark rye bread or cracker, its the perfect accompaniment to a pint.

Before I get into the specifics related to my liptauer experiments, I thought I'd share a few pics from the Omnivore signing. Thank you all for coming out. It goes without saying - it was fun meeting each of you, and I particularly loved all the little notes, handwritten recipes, and homemade treats you left me. I have a couple more signings coming up related to the release of Super Natural Every Day, all with friends looped in. There's the one in Portland with Kim Boyce. I'll be at the Remodelista Local Seattle Market, and then with Lara Ferroni at her lovely studio later that evening.

On the liptauer front - I played around quite a bit trying to get this the way I imagined. People seem to use all different kinds of cheese in their liptauer spreads - cream cheese, sheep milk cheese, cottage cheese, etc. I tried a bunch as well. Let's just say ricotta was a bad, bad call. But I liked my goat cheese version, so that's what I'm sharing here. The consistency is thick, spreadable, but not too loose for crostini. As far as all the other add-ins, I just went with what tasted good to me. Try it this way for starters, and if you think you might like more mustard flavor, or paprika, adjust the next time around. The kicker at the end of this story is this. I walked out the door to go to the signing - ice, Prosecco, purse, cellphone, postcards, goat cheese crostini - check. check. check. Left the liptauer plate on the coffee table. :/

Use room temperature butter and cheese. It helps the spread cream up beautifully. And slice your bread much more thinly than what I've done here. I could only track down pre-sliced black bread the day I shot these. You can make the spread a few days ahead of time if needed.

a few dozen thin crostini or crackers*
one bunch of chopped chives, to serve

Cream the goat cheese in a large bowl wither by hand or with a hand blender. Add the butter and incorporate that as well. Add the paprika, mustard, and salt and cream some more. Now, by hand, beat in the caraway seeds, capers, shallots, and pickles. Taste and adjust until everything is to your liking.

Assemble no more than an hour before serving, so your bread doesn't go soft. Spread the liptauer across each crostini, and sprinkle with chives.

*You can make crostini simply by tossing pieces of bite-sized, thinly sliced bread with a couple glugs of olive oil and the placing them on a baking sheet in a 350F/180C oven until deeply toasted. Cool and store in an airtight jar until ready to use. 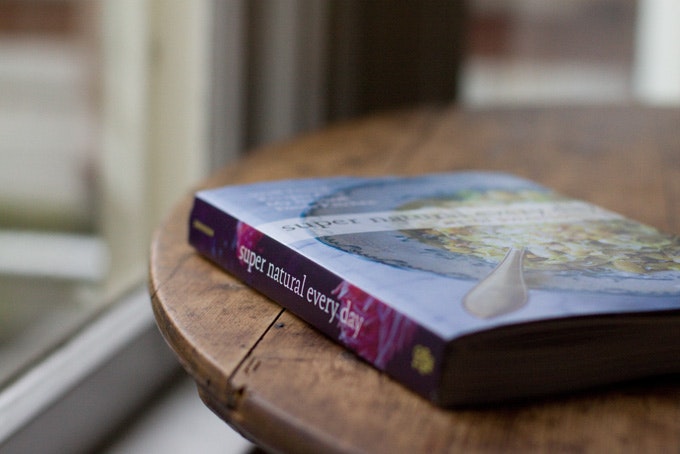