Back in the late 1990s, my friend Beatrice had a tradition of hosting dumpling parties. She'd make a few fillings ahead of time and then a bunch of us would spend the afternoon sitting around stuffing, folding, sealing, pinching, steaming, chatting and eventually eating. If you've never tried making your own dumplings you might consider the whole process a bit fussy, but the next time you have a bit of extra time on your hands, and/or a few nimble-fingered helpers, consider giving it a try. The filling for these particular dumplings is bright and light, focusing on the peas as the central flavor. That being said, the lemon zest is the magic ingredient that sets everything off. It permeates the pea and ricotta puree punctuating each bite like a bolt of sunshine. Dumplings are often served with a dipping sauce, but I found that all these needed were a thin drizzle of olive oil and a few grains of salt.

I'll warn you in advance, some people are natural dumpling darlings - able to crank out row after row of identical pillows. Others? Not so much. You'll quickly discover which camp you fall into. Either way, here are a few tips (I've learned the hard way) that might be helpful:

- Keep wrappers covered, they dry out quickly becoming brittle and impossible to work with.

- Exercise restraint when filling your dumplings - they key is to avoid overfilling. Also, ease out any air pockets before sealing - they expand when heated and will cause problems.

- When stuffing and folding dumplings use an assembly line method. Line counter with a dozen wrappers, drop filling onto each, seal and fold each. Instead of doing one at a time. 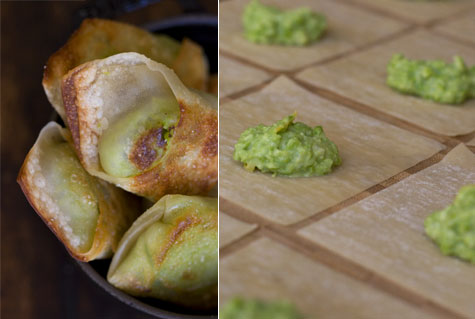 I cooked these two ways. You can see how the pan-fried version looks in the above shot, and they were de-licious. That being said, the steamed version were even more exceptional. The recipe below includes techniques for both.

- There are various ways cooks keep dumplings from sticking to a steamer. You might line the steamer with banana leaf, tamale leaf, or a large leaf of lettuce. I didn't have any of those on hand this time around so I kissed the back of each dumpling with a touch of olive oil (where the dumpling would touch the steamer), and hand no problem with sticking.

- You might not want to immediately steam every dumpling you make. That's ok, they freeze perfectly. To keep them from freezing together in a big clump, freeze dumplings for an hour flat on a parchment-lined baking sheet or plate. Now place them in a freezer bag. You can go straight from freezer to steamer.

Scan the notes in the original entry for more dumpling making tips, I've outlined 4 or 5 important ones there. Also, the instructions here are for steaming the dumplings, but I also had success pan-frying them in just enough olive oil to cover the bottom of the skillet. Cover and cook in a single layer until the bottoms are deeply golden, flip using a metal spatula, cover and cook until the other side is browned.

1 package of wonton wrappers, or round wrappers

Bring a medium saucepan of water to a boil. Salt the water (as you would pasta water) and add the peas. Cook until bright green in color and puffy, about a minute if the peas were frozen, less if you started with fresh ones.
Drain the peas and run under cold water for one minute to stop the cooking.

With a food processor (or hand blender) blend the peas, ricotta cheese, olive oil, and salt into a puree. I like a bit of texture, so I don't go too far. Return the mixture to a big bowl and stir in the shallots, Parmesan, and lemon zest. Taste. Add more salt if needed.

Fill the dumplings using an assembly line technique - a dozen at a time (for the most part following the instructions on the wrapper packaging). Place twelve wrappers out on the counter, drop a very scant teaspoon of filling onto each wrapper, rub the perimeter of each wrapper with a wet finger seal, fold (most packages have diagrams), and set aside on a plate. Do the next dozen and repeat until all the filling is used up.

Set up your steamer, rub each dumpling with a bit of olive oil, arrange the dumplings in a single layer (being careful not to overlap), and steam for about three minutes - until the dumplings are tender and transluscent. Sprinkle with a touch of salt and enjoy.

Heidi - at a party I hosted this past weekend my friend brought over some of her fantastic spring rolls that she makes using the same wonton wrappers. She doesn't fry them though- she bakes them! And they turn out nice and brown and crispy too. She doesn't use olive oil or anything to make them crisp up, they just do. Maybe an option for these dumplings?

So seasonal & looks great! I've made a similar recipe but as ravioli. It's from epicurious.com here: http://www.epicurious.com/recipes/food/views/103366 Can't wait to try your recipe.

I wonder if I could get my fiance to eat peas with this recipe?!!? Looks D-lish Thanks :)

Perfect timing!! I have moved from the states to Scotland, and I can't find wonton wrappers in my area! I LOVE to make dumplings, and I'm dying for a recipe to make the wrappers fresh. Any ideas??

Yum, Heidi! This looks delicious, and relatively simple to make. Thank you for posting this! :D

Your recipes are always, somehow, so timely for what I'm up to. I've spent some time today searching the web for a dumpling recipe for a dinner party we're hosting this weekend -- though I was aiming originally for a lighter version of a German style dumpling. I love that this showcases peas though, which are beginning to show up at my local markets. I have tried steaming wontron wrappers before though and I always run into a bit of trouble. Inevitably I under-steam or over-steam them. There's a moment of perfect doneness that isn't given away by visual clues, since they seem to finish up their cooking after they come off the steamer. Trial and error, I guess.

Becky And The Beanstock

Such a fun idea for a party (if slightly messy)... The fried ones look the tastiest, as fried things so often do, but it's good to hear that the healthy option wins the taste test today!

Jane -- I think you could make these vegan by using tofu/olive oil instead of ricotta. I often do this in lasagne and other dishes that call for ricotta. Use a block (or half block) of firm or extra firm tofu. Buzz in the food processor to crumble. Then, while the processor is running, sloooowwwly drizzle in a stream of olive oil, until the mixture resembles ricotta. I find that it is virtually indistinguishable from ricotta, and I am going to try this dumpling recipe with my "faux-ricotta."

I am speechless. The beautiful pictures and the briliant recipe.. and I just got a bambo steemer!! I will try these very soon..

Heidi, These look wonderful. Although the recipe won't work for me (not vegan), I love the way your dumplings look. The dumpling wrappers I use, don't have such fancy instructions to put them together. I'll have to try to see if I can replicate yours. They're beautiful! Heidi note: Jane, the ricotta adds some fluff to the pea mixture, but I suspect they would be delicious even if you left the ricotta out entirely (just use more peas). Or substitute something that you think might go along nicely with the pea flavor.To make them that shape I folded the wonton wrapers diagonally from corner to corner then took the two "arms" and bought them to the center with a pinch. I'll update the instructions.

Those look wonderful. We had a friend, whose neighbor taught us how to make pot stickers. They tasted so much better than any pot stickers we could buy at the store. But they were a little work. :-) They also froze beautifully.

Oh, you make me wanna go make some chinese dumplings now! I love dumplings! by the way, I made the coconut pancake last week! they were great!

I love the simplicity of these dumplings! I bought a package of wrappers yesterday with the intent of making something. Dumplings are so versatile, from veggie or meat to even sweet fillings. I like this pea filling -- it just screams 'spring time is here'.

What perfect timing! I just harvested the last of the peas from my garden so I have about 5 lbs of fresh peas on hand. This sounds like a unique and delicious way to use them up. Also, I made your Strawberry Panzanella this weekend for a dinner party and it was a HUGE hit. Thanks!!

i am a dumpling lover. and these beauties sound delish! love the shape your folded them into.

Oh boy, those look nice and crisp and I love ricotta! I just bought 2 lbs of this incredible fat free ricotta from a brand a just discovered, Calabro? It's so creamy that it's more like queso fresca. Anywho, not a pea fan myself, but I would likely use edamame or corn instead. - The Peanut Butter Boy

Is it possible to use dried or split peas for this since they end up mashed?

I love dumplings! The peas and ricotta are so light and springlike. These would make excellent (and impressive!) hors 'oeurvres. Love them!

These look great, and it's a great way to use peas. A dumpling party sounds like a lot of fun!

They look delicious, and I can't wait to try them! I love dumplings! Did you fry those in the photo? Heidi note: I steamed some and pan-fried others (see headnote)...both were delicious, but there was something extra special about the way the lemon flavor come through with the ones I steamed.