Not that I need much encouraging, but I've been compiling a good number of older cookbooks - early titles by authors I love, first editions, and such. The intent is to make them available at some point related to Quitokeeto - perhaps not on the site, more likely at the studio so people can pick and choose and browse in person. An example would be a book like this one - Diana Kennedy's Recipes from the Regional Cooks of Mexico published in 1978. It's the sort of title I like to revisit, for inspiration in my own kitchen, but also to understand what was inspiring Diana Kennedy in the 1970s. One of the recipes she highlights is a green corn soup - Sopa Verde de Elote. A soup she describes as "unusual and delicious" from Mi Libro de Cocina, published in San Luis Potosi in 1965. I took a few liberties with the recipe, and have to tell you, the resulting soup is something special. The color is a knockout - bright, vibrant green. And the flavor is surprisingly dynamic beyond the main base ingredients. There is the sweetness of corn and peas off-set by a spike of green chile, a finishing dollop of creme fraiche, and generous squeeze of lime. You get crunch from pepitas, fragrant green citrus notes from a shower of cilantro, and, as a bonus, it's a soup that comes together quite quickly. 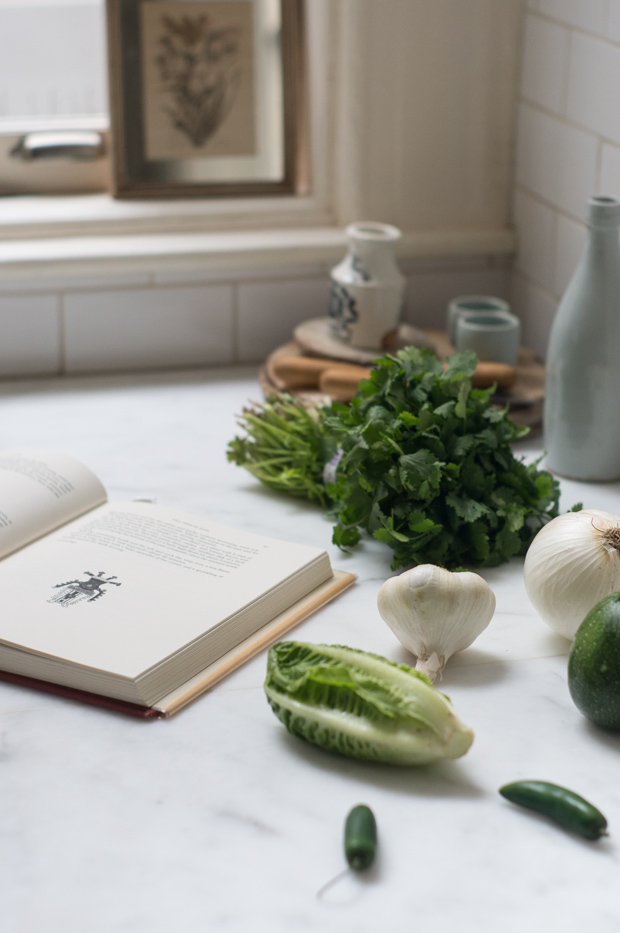 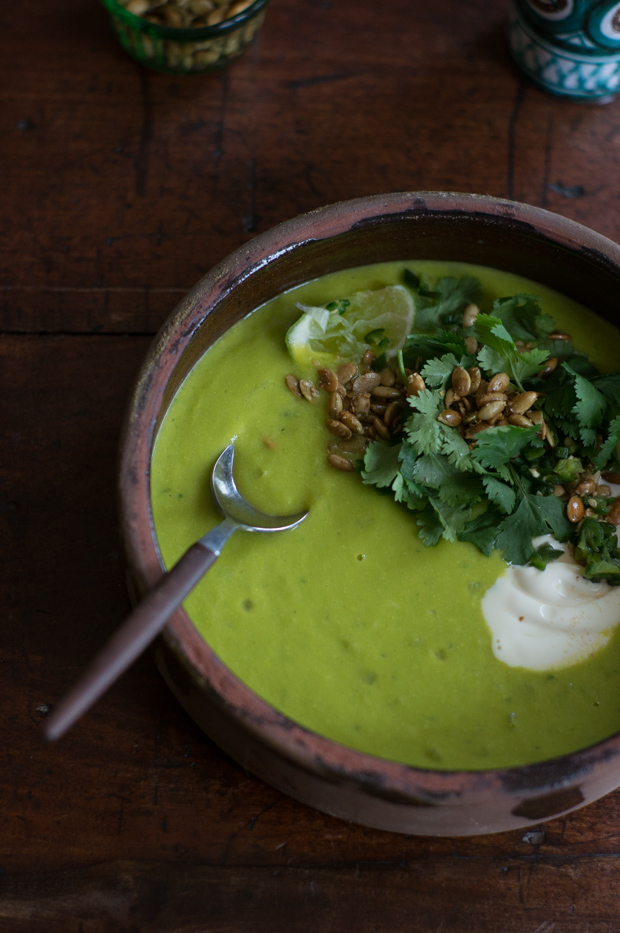 I mention it in the headnotes below, the original recipe calls for tomatillos, which are easy to find at some points in the year, and not so easy at others. I did this version with zucchini, in case tomatillo is trick to come by - which I suspect it is for many of you. Different, but, I'd argue, equally tasty. xo -h

HS note: (Defrosted) frozen peas and corn are fine to use here. Also, as I mentioned up above, the original recipe calls for tomatillo in place of the zucchini I used here. It's what I had on hand, and I also figured it would make the recipe more accessible to many of you. If you prefer to give the tomatillo a go, use a few small ones, and remove their outer lantern-like covering. Proceed with them whole in place of the zucchini.

Heat one tablespoon of the butter in a large soup pot, add the zucchini and cook for a few minutes, until soft. Remove from the skillet and blend using a hand blender or standard blender. I like a little texture here, but it is a matter of preference - smooth is also fine.

Wipe out the skillet, heat the remaining 3 tablespoons of butter, and fry the onion and garlic, without browning, until soft. Add the pureed zucchini and cook over high heat for about three minutes, stirring constantly.

Blend the corn kernels in a separate bowl, or blender, with 2 cups of water, peas, cilantro, chile, and lettuce leaves. Really aim to get the mixture very smooth before adding to the zucchini mixture. Cook over medium-high heat for another few minutes, stirring and scraping the bottom of the pan constantly. Add another 1 1/2 cups of water, or more, depending on the consistency you like. Add the salt, plus more to taste, if needed. Serve with lots of the suggested toppings.

*To char the chiles: place whole chiles on a hot skillet or grill, cook, rotating regularly, until blistered and charred on all sides. Transfer to a glass bowl, cover, and let steam for a few minutes. Now the chiles are ready to peel. 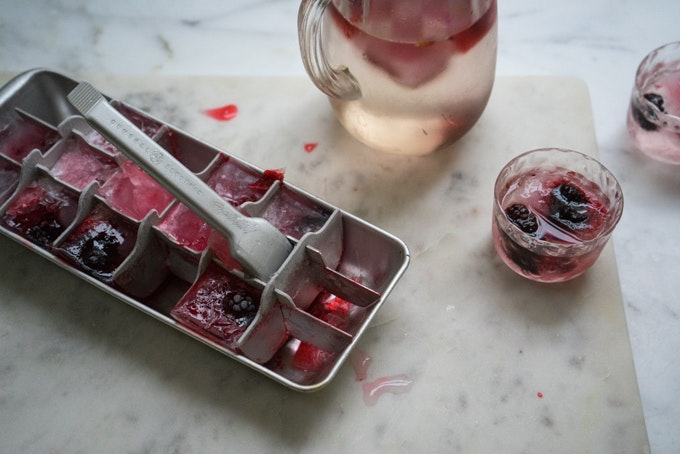 A quenching round-up of summer drink ideas that will keep you hydrated and full of good ingredients while enjoying the sunshine. 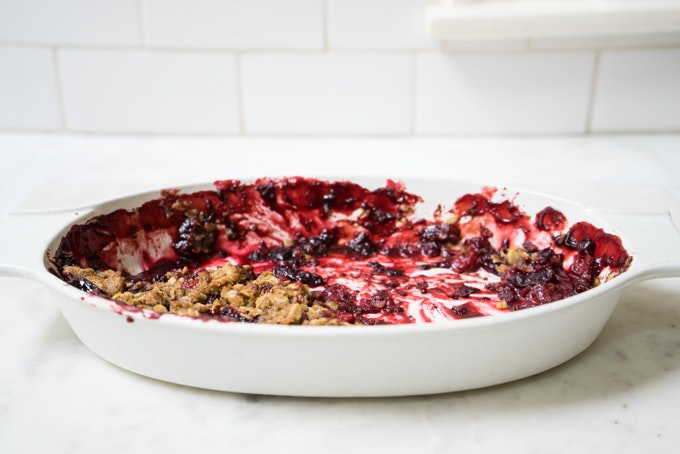 A round-up of favorite summer recipes. A short list of summer-friendly recipes that I have a special fondness for, and revisit regularly. 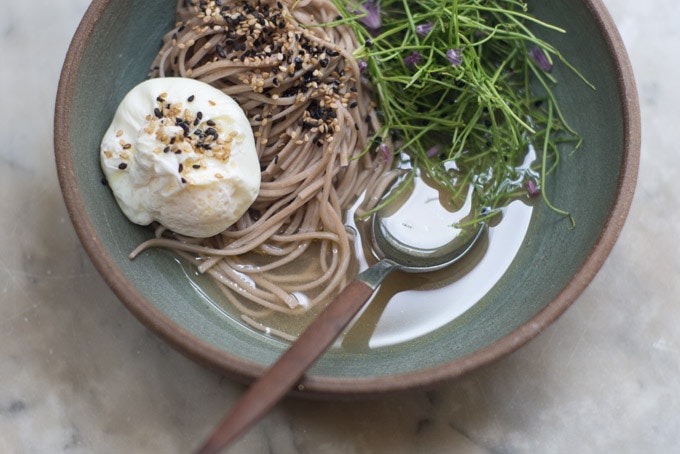 A light broth perfect for summer seasoned with miso - chopped lemongrass, shallots, ginger, tomatoes, and coriander. It is beautiful served straight, but also works wonderfully as a base for noodles, poached eggs, or rice soup

Love the green. I like cooking with Romaine, actually...but my favorite on the grill. I can't get behind pepitas...though I know they are so good for me! Thank you for this.

I love the idea of reviving recipes from some of the cookbook authors who shaped food and brought us to where we are today. What we were eating then is so interesting and important. We have the cookbook collection that was my mother's, and I know there is some Diana Kennedy in there. I have old Gourmet's from the 40's, and talk about a snapshot of the times! Keep digging!

I wonder if you found a great recipe for cilantro soup among your old cookbooks? I had an unforgettable one at a Mexican Restaurant in Ft. Lauderdale and am still trying to re-create it.

We have so much tomatillo in the garden...I can't wait to try this! Happy Nesting.

This is the fourth time lately I have made a special trip to the grocers for ingredients for one of your recipes. First time was for Pluot salad, next Shredded Salad, Bar Tartine Cauliflower Salad, all so delicious I passed your site onto my foody friends. Now for this amazing looking soup and I have tomatillo's in my garden, so I will try those first. On a side note would you be willing to write up the titles to the books you have been collecting, I would love to check my local used books stores for them. Thanks Heidi! Kate

Wow, this looks like such a delicious and unique soup! I have some late season zucchini in my garden, definitely going to try this soup out!

Love the idea of the idea of first edition old cookbooks and this soup is beautiful, looking forward to trying it! Thanks for sharing.

Does it make a difference blending the ingredients separately, to make an even quicker (and cleaner) job of it, do you think it would get the same result cooking the zucchini, onion and garlic in butter together, then pureeing everything together with the other ingredients?

Oh, what a gorgeous soup. And thank you for trying this with zucchini for those of us who don't have access to fresh tomatillos, although I know it's a very different flavor. This is a great way to use the last of our summer corn!

Oh my, this is so gorgeous. After our 24 degrees overnight temperature, I'm going to make this soup as a final reminder of a glorious summer--and while I can still get fresh corn at the market.

Beautiful. Perfect. I need an inspiring soup to make. Thank you! Also where did you get that bowl it's in? Selling them at Q I hope? xx Aria

HS: Hi Aria - no, I picked it up at Bram - an amazing little claypot cookware store in Sonoma. They come in a range of sizes. http://www.bramcookware.com/

I never know what to do with tomatillos. They grew like crazy in my garden. Thanks for the inspiration!

Love the vibrant green, I feel refreshed just looking at it :)

Perfect timing - we just got tomatillos in our CSA yesterday. Can't wait to give this soup a try. Thank you!

We just finished your cauliflower soup with mustardy croutons yesterday (except we put the mustard straight in the soup and skipped the croutons), so this looks like a perfect big-pot replacement for the week. Thanks!

Ksenia @ At the Immigrant's Table

This soup looks amazing, and I can only imagine the punch of flavours it holds, it looks absolutely stunning! Looking through old recipes is always so inspiring :D Thanks for sharing! x

This is so beautiful. I love the idea of going back to the old, grabbing recipes of cookbooks where there aren't even any pictures or maybe only some illustrations and being surprised by the outcome.

Such a gorgeous soup. The name alone is calling to me!

What a beautiful soup with so many great flavors. I can't wait to try it!