I'm lucky to be the occasional recipient of Josey Baker experimentations. The other day Josey handed me a still-hot loaf of 100% einkorn bread - substantial, fragrant, a dark brown crumb with a craggy top-crust. It smelled like a great brewery - all malt, and grain, and warmth. And it begged to be treated right. 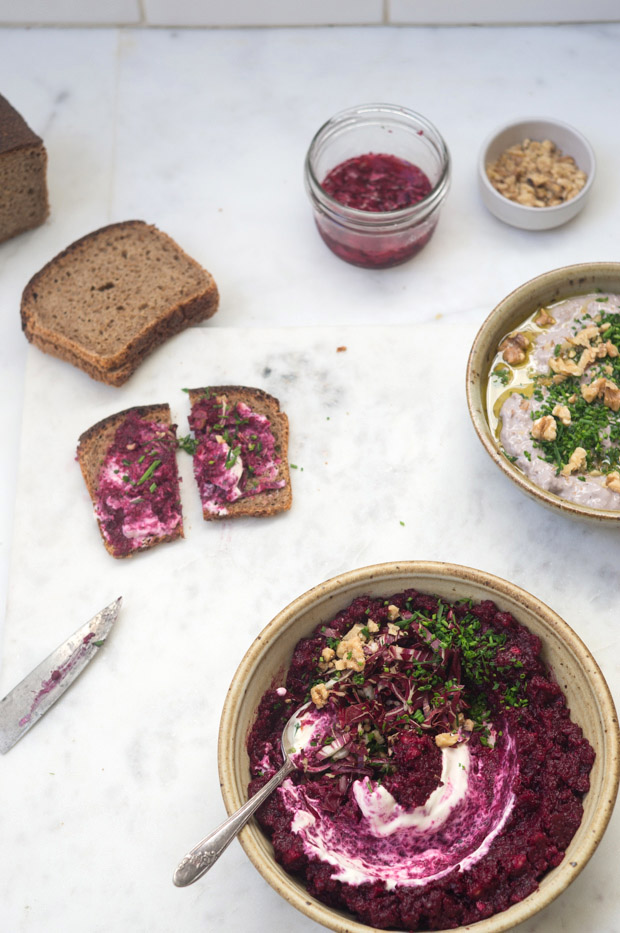 The first question to come to mind was slicing strategy...the consensus was: 1) Allow the bread to cool completely. 2) With this loaf - not too thick, not too thin. Not to digress too much, but when it comes to toast, the thickness or thinness of the slice is key. Some breads lend themselves to a thick slab - Blue Bottle Cafe (in downtown San Francisco) cooks an egg-in-the hole of Acme's pain de mie. Perfect. There are other breads I like thinly sliced and extra-toasted - Josey's rye comes to mind, also Anna's Daughters' Rye - a beautifully distinctive local bread. Once this was sorted, Josey got on with his afternoon, and I started thinking about what I'd eventually put on the bread. 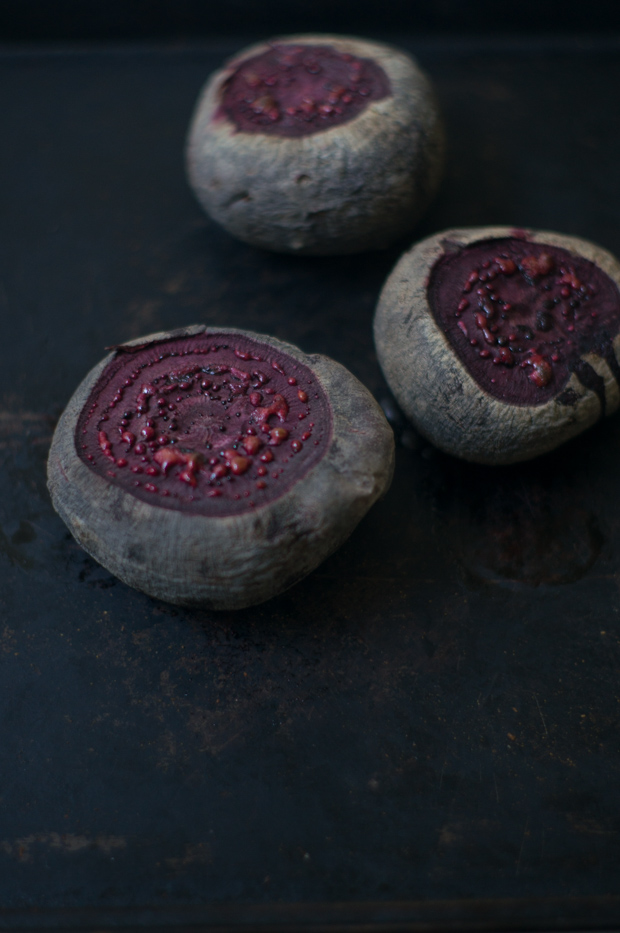 Silvena Rowe's book had been in my bag for a few days, I was reading it when I was on the bus, or waiting on a coffee. So I started paging through, and settled on a beet spread I knew would be beautiful - the sweet earthiness of the roasted beets accented with toasted walnuts, chives, dates, a bit of booziness, and a swirl of creme fraiche. 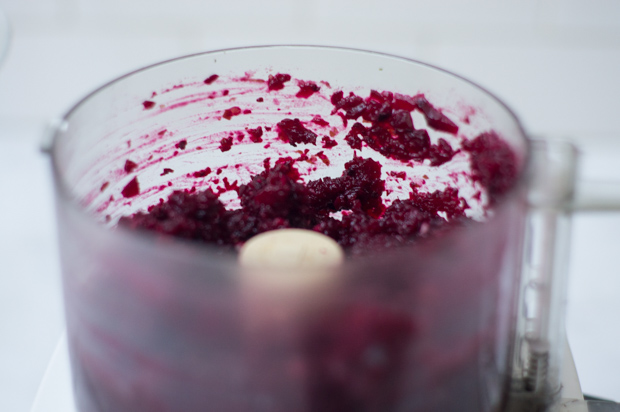 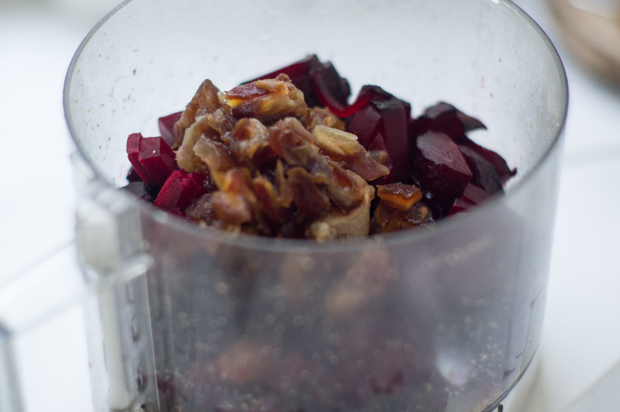 The beet caviar was a nice accompaniment to the einkorn, and I imagine it would be brilliant as a spread or dollop on just about anything - from toasted pita, to a harvest soup. A swirl would be nice in risotto, or as part of a mezze spread. Enjoy!

PRINT RECIPE
Get Premium+
4.6 from 5 votes

If you have bourbon or vodka on hand, you can use one of those in place of the cognac.

Adapted from The Eastern and Central European Kitchen: Contemporary and Classic recipes by Silvena Rowe (2007). 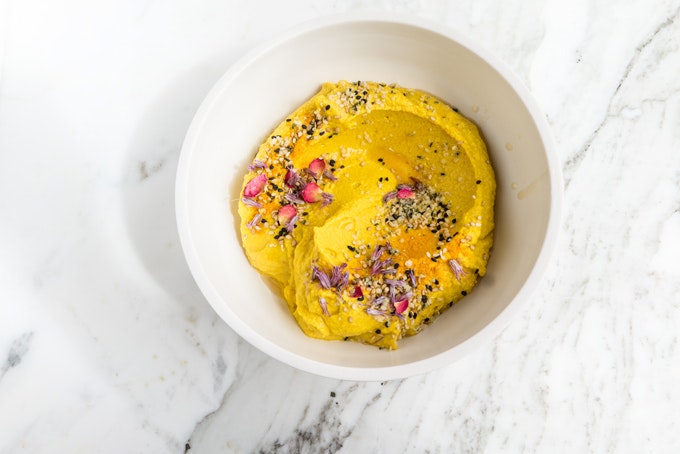 A lightened-up hummus - reining in the tahini and oil a bit. Billowy and smooth, it's a boosted hummus for everyday, all-day w/ golden beets, turmeric, and chickpeas. 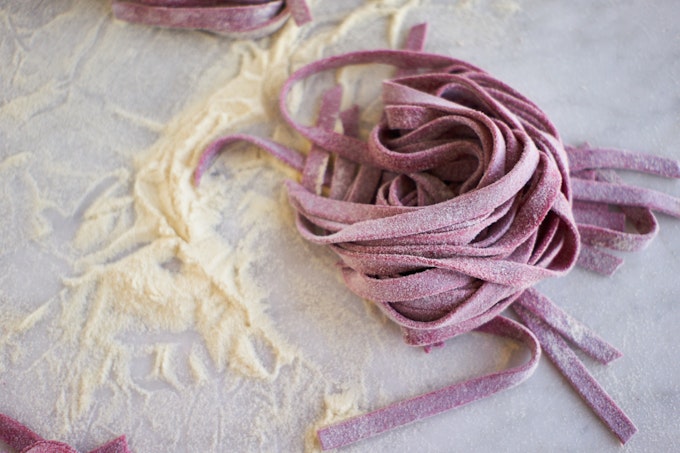 Fresh pasta, you can do it! A beautiful, fun, and simple way to make homemade fettuccine noodles. 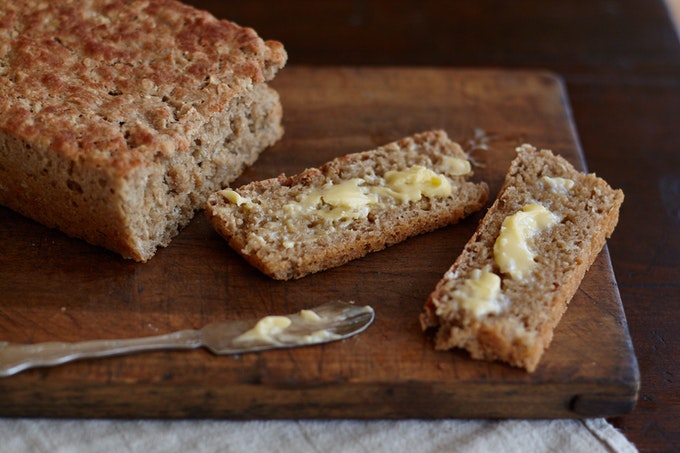 The simple, easy little bread you should make right this minute - yeast-based, farm-style, made from rolled oats and a blend of all-purpose and whole wheat flours.

Ahhh...sweet beets can you ever go wrong with these? We love them caviar style as well, one Thanksgiving we combined with fresh cranberries and gelatin the taste and presentation was a hit. Happy feasting! http://thefolia.com/2012/11/22/thankful-for/

This looks like fabulous party food! I wonder if port might also be a nice sub for the cognac?

Beautiful spread. It's simple but packed with flavor. I make a similar roasted walnut-beet sauce with a Middle Eastern flavor profile. Must try this on toast next time though.

This looks beautiful and I just have to say we're devotes of your site; we cook from it many times every week. Is the garlic added raw or roasted with the beets?

Thank you Rosa! On the garlic front - you could go either way, really.

I can just imagine the taste - kind of earthy/nutty and slightly sweet spread over the dense bread. Perfection.

This looks beyond tasty. My mom and I are already huge fans of roasted beets, so this is a must have in our book!

I always get beets, then have no idea what to do with them! This is so perfect.

This looks divine. I've never included alcohol in a spread, so I'm interested to see if the taste is very pungent or not.

Heidi, I have made 100% Einkorn bread and it's a very heavy loaf. Mine didn't cut well at all. I used a sourdough starter with it so that could be why. I have had to resort to using Spelt with the Einkorn to make it useable. Definitely will try this spread as well!!

Is there a non-alcoholic substitution for the cognac? Veg broth, maybe?

I would love to try this recipe. I have dried figs in the house right now. How about using figs as a substitute for the dates?

Could you sub almonds for the walnuts? any other nut?

Oh my, this looks incredible. These colours!

I make an almost the same spread all the time. The only difference is I use prunes instead of dates and mayo instead of sour cream. Even my 8 year old loves it.

Yummy! Are the dates fresh or dried though?

Hi Ari - they are dried. Enjoy!

Hi Arundhati - I added them toward the end. Although, if you prefer a smooth textured spread, you could certainly add them earlier.

I am always left with an abundance of beets in fall. A recipe like this would suit me perfectly! Plus, it's gorgeous!

Oh my! This sounds soo good. Thanks again for another amazing recipe :)

Beautiful colours and a wonderful blend of flavours going there. I use a lot of beets for my salads and dips and this caviar is something I would love to make for my millet pita breads. Thank you for the recipe.

Yum! Brandy (cognac is brandy) works too and if tofutti "cream cheese" or "sour cream" is used it becomes a vegan dish.