I haven't used Arborio or Carnaroli rice in my risotto endeavors in a long, long time. I've been using pearl barley instead - and I love it. I know this is going to be a hard sell to some of you purists, but in an effort to incorporate a wider variety of grains into my day to day cooking, I started experimenting with pearl barley and other grains in place of the rice I was using in traditional Italian risottos. Haven't looked back since.

I'm using the name 'risotto' for context more than anything else - this is really a risotto-style barley. If you've made a risotto in the past, the idea here is similar. This version isn't as delicate as many of the rice-based risottos I've cooked over the years, but I actually prefer the toothsome bite and overall heartiness of the barley grains during risotto season, which for me is winter. That's not to say you couldn't do a delicious variation of this any time of year, I just like to fill up with a creamy, warm bowl of cheese-dusted risotto when it is cold out. Like right now.

Here's the one-paragraph on the range of barleys available and their overall whole grain-ness - this could easily grown to a page or more, but I'm going to try to keep it concise. You can find a range of barley in stores - hulled barley, pot/Scotch barley, pearl barley, barley flakes, and more. Compared to pearl barley, hulled and pot/Scotch barley are more nutritious because they aren't polished (in the case of hulled barley), or they are polished minimally (in the case of pot/Scotch barley). I use pearl barley for this recipe because it lends some of the starchy-creaminess characteristic to risotto, something you can't achieve with hulled barley. Barley labeled "pearl" or "pearled" is typically polished more than pot barley, but I've learned to look at the actual grains instead of the labels as a guide, in part because I've found such a range.

I look for pearl barley that hasn't been polished to death. I look for grains that still have color, the more they are pearled the lighter in color the grains get. Sometimes, I like to do a blend of pearl barley and pearl (also labelled semi-pearl) farro - the farro I buy looks to be barely polished (dusty brown in color and polished just enough to rough up the surface of the grain). It cooks in just about the same amount of time as the barley. Its great, and you get a nice, subtle play of textures.

Generally speaking, the more you mess around with a whole grain the more its nutritional value decreases. White rice has the nutritious bran and germ removed entirely from each grain.

Give this recipe a try or experiment with pearl barley in place of rice in your favorite risotto recipe (it also works with Arborio if you'd like to stick with tradition!). I use a bit of crème fraiche along with a good sprinkling of cheese to finish, necessary for that creaminess that everyone loves. You need to overcompensate a bit at the very end when you are using barley. Let me know what you think - yes, no?

Also, totally unrelated (but I thought you might be interested). I dragged Wayne out of the house two nights ago to stand in the cold on the hill overlooking the San Francisco Bay. The Queen Mary 2 came to San Francisco for one night and I wanted to see it go under the bridge. It is the largest ship ever to enter the bay. Here's the video I shot as it squeaks under the Golden Gate Bridge on its way out to sea - an unbelievable sight. The whole city went gaga over it. Note all the flashes going off on the actual ship. I'm sure we'll see some of those shots eventually on Flickr.

I used tatsoi, left over from this weekend's market, as the green in this recipe but feel free to experiment with other greens (chopped chard, spinach, arugula, etc). The recipe calls for 6 cups of stock/water. This can vary quite a bit depending on your pot and the grains, but you are likely to need between 4 1/2 - 6 cups. Sometimes I like to throw in a handful of chopped Meyer lemon segments in for added flavor and texture, but be sure to remove all the seeds.

Heat the olive oil in a large, heavy saucepan over medium heat, then add the onions, shallots, garlic, and salt and saute, stirring constantly, for about 4 minutes, or until the onion begins to soften.

Add the barley to the pot and stir until coated with a nice sheen, then add the white wine and simmer for 3 or 4 minutes, until the barley has absorbed the liquid a bit. Adjust the heat to maintain a gentle, active simmer.

In increments, add about 6 cups of water or stock, 1 cup at a time, letting the barley absorb most of the liquid between additions; this should take around 40 minutes altogether. Stir regularly so the grains on the bottom of the pan don't scorch. You will know when the barley is cooked because it won't offer up much resistance when chewing (it will, however, be chewier than Arborio rice).

When the barley is tender remove the pot from heat. Stir in the lemon zest, Parmesan, and crème fraiche. Taste and adjust - add more salt if needed, more lemon zest. Then stir in the greens. Garnish with toasted pine nuts and a dusting of extra Parmesan before serving. 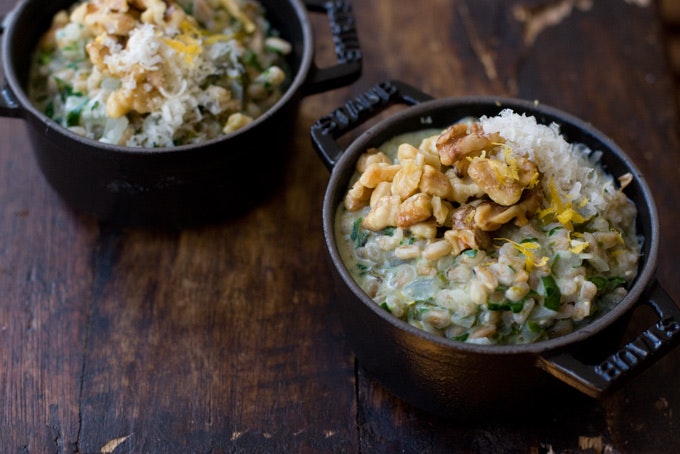 A seaweed risotto recipe inspired by a trip to Chile. This version calls for dried nori seaweed, pearled barley, lots of finely chopped spinach, and a blend of cheeses. 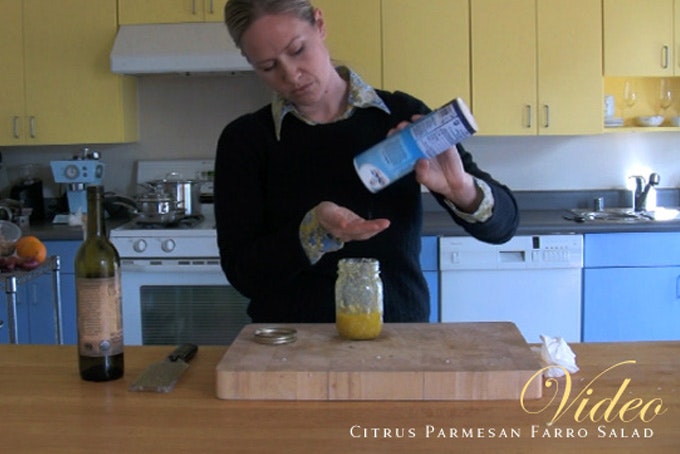 I've been reading about this lately, using other grains for risotto and I've wanted to give it a try since risotto (delicious as it is) doesn't always make me feel so hot afterwards. I've also been craving anything tart, so this looks like a great recipe for me to try this weekend!

That looks awesome! What kind of wine did you use? I'm always curious as to what people use for cooking.

Heidi - I first made farro 'risotto' totally by error and figured i was on to something. it really works well. i have been using short grain brown rice as well and although never the same as arborio, the flavor and health benefit is worth it. i heard from a chef once that you can up the creamy quotient of brown rice risotto by taking a small handful of uncooked rice, grinding it up to a powder and adding that toward the end. anyone tried this?

Heidi - Risotto is one of my VERY favorite things to cook. I find it totally therapeutic to stand around the range coaxing something so creamy and soothing into existence. I *just* made my first barley 'risotto' the other day (without the therapy by) using a slow cooker. It was a sausage and fennel risotto using hulled barley. It turned out fabulously, and while I didn't get to do the normal risotto routine, it was fantastic to come home to a big, fragrant pot of comfort food. This recipe sounds divine and I'll give it a shot, as well as subbing barley for Arborio more often (I'm a big fan of getting more bang from your nutritional buck whenever possible). Thanks!!

This is marvelous - truly marvelous. Experimenting with recipes - such as trying new grains in place of old grains - to make them healthier, lighter, whatever, is exactly what I do. You start with a good inspiration (in your case, risotto) and take it closer to your particular ideal. In this case, a new grain. Marvelous idea; I applaud your initiative.

Who knew that watching a ship go under a bridge could be so exciting? But it was! I like a bit of fresh tarragon in my meyer lemon risotto. I find it bridges the gap between the fragrant lemon and greeny greens.

I've been making "risotto" with barley for awhile now too, actually a good alternative for people who have problems with lactose--it started with a recipe from "Fresh Foods Fast" (which has some fantastic veg recipes), which uses golden beets, swiss chard and farro, but the kicker for those liking the comfort and yumminess of risotto but wary of the amount of butter and cheese it takes to really get there, is that the recipe uses goat cheese, just stirred in at the end, which approximates the traditional risotto creaminess, but not as heavily. Tasty, and pretty quick to make, too!

I've been experimenting with making "risotto" out of many whole grains. My most successful attempt has been with Farro, both in a savory risotto and a sweet breakfast risotto. It's like the best oatmeal you've ever, ever had, but better! I've also found that millet makes a nice 'gruel' as well. Next I'll have to try pearl barley.

thanks for the recipe. its a great idea to use barely instead of rice. Its the first time I am hearing of it but I will work on this recipe tonight. Just one question... what is the amount of rice you use in case you would want to stick to rice instead of barely? Is it the same, 2 cups?

i've been trying out different uses for grains as well, and this is such an exciting use! i haven't bought pearl barley yet, but when I do, it will be to try this recipe.

Love the idea of using barley instead of rice; I wish Meyer lemons were easier to come by here on the East Coast. Thanks, too, for sharing the excitement of the Queen Mary's passage through the harbor!

Hi, love the blog Heidi. I'm a vegetarian food and drink journalist from London. One of the fashionable dishes in London restaurants right now is beetroot (beet), barley and Barollo (red wine) risotto. Delicious, and with with gorgeous colours too!

What a fantastic idea!! I just love it. I have had risotto with quinoa - just need to improve it a bit.Barley is a great idea.

Such a refreshing-looking recipe! I've cooked barley before (it's pretty common here in Estonia), though not as 'risotto'. I think there's actually a word for barley 'risotto' - that's orzotto (Gevalia.com writes that "In Friuli, orzo, or barley, is cooked the way rice is cooked for risotto in the rest of Italy.")

I am anxious to try cooking with barley - something I have never done before. I am always up for new adventures and new tastes. Thanks!

I have to admit I'm one of those barley purists you mention. For me, the issue is creaminess, and barley just doesn't have the necessary starch to make a creamy risotto without help. Of course, crème fraiche is a very nice way to add that creaminess. By the way, I love the mixture of citrus and greens. Sounds delicious.

I got excited along with everyone watching that video. Very, very cool! Thanks for sharing it with us!

I've made a risotto using farro, pearl barley and some arborio with taleggio ... the recipe is an old family favourite of an Italian providore I know... wonderful, gutsy dish that's so nourishing. I love the idea (and flavour) of farro, which is an ancient grain. Thanks for the tips on choosing barley.