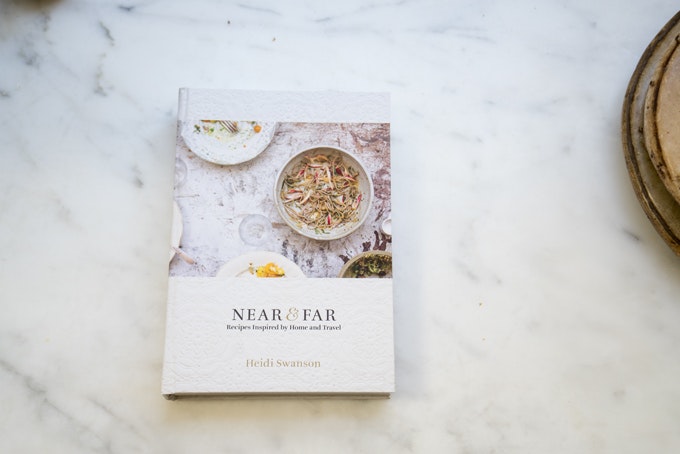 I wrote a post a while back about writing a cookbook proposal. It explained how I typically approach the first stages of a cookbook project. I thought I'd follow that up with a post primarily (but not entirely) focused on some of the details that have taken place in the time since - between signing a contract and sending the book to the printer. I should mention, it has been incredible hearing from so many of you - each at a different stage in your own projects. Whether it's my own book, or a book someone else is working on, I find the process fascinating. The more you talk to different cookbook authors, the more you realize just how unique the process is to each individual. 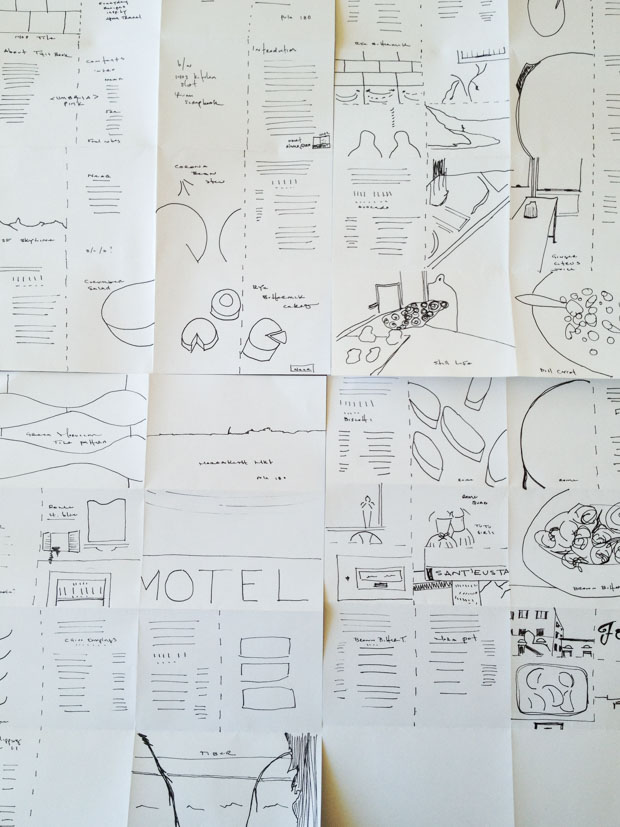 - Above - This is actually one of the first things I did for Near & Far to try to get a handle on flow, structure, and how some of the images, recipes, and content might work together. I would take standard sheets of paper, fold them into (looks like) eighths, and then sketch/block out spreads and content blocks. I think I like this sort of thing in the early stages because it is small scale, flat mapped, and doing the sketches actually forces me to look at the images and the content in a way I might not otherwise. On past books I've talked about how I use a big binder throughout the entire book process to pace things out, keep track of recipe development, testing, and revisions. There are similar considerations on the photography front, so the binder helps there as well. When you continuously page past an image you aren't happy with, it's easy to get motivated to reshoot.

I should also mention here, that just because I arrange all my content in a binder very specifically as part of my process, I don't get hung up on that specific order of things once I turn everything in to Ten Speed. I work with Toni Tajima on the overall design of my books, and while I show Toni my binders and bulletin boards, and all of it, I don't at all dictate placement or anything of that sort. It's much more a ongoing conversation between me, my editor (Julie Bennett), and Toni, over time. Part of the process I love most is submitting the manuscript and photography, and then seeing how each of them approach it. They have the fresh eyes at that point in the process, and there's really no reason for me to do anything aside from let them do what they're good at. If I've done a good job of establishing the tone of the overall project from the start, this part should be smooth - which points back to the importance of establishing exactly what you want to attempt with a thoughtful, solid proposal. 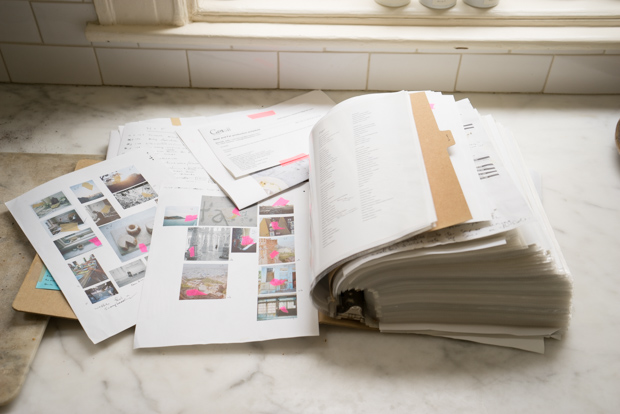 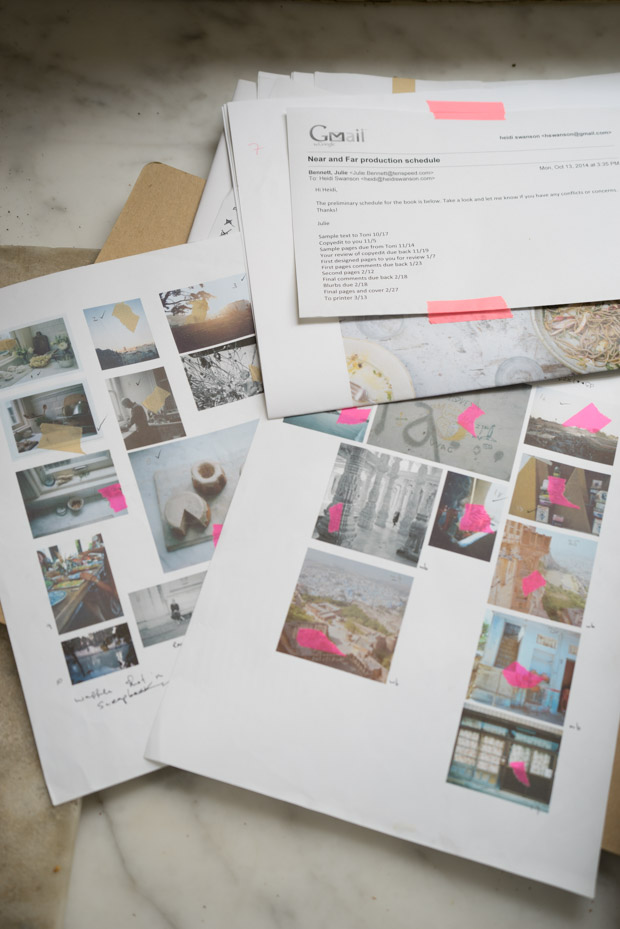 - Above - This is what my binder looked like at the end of the whole process. It got a bit out of control, and I probably should have split it between two binders. The close-up of the images with pink tape is a printed index of all the color images I was submitting. If an image was ready - high resolution, saved to the hard drive I'd submit - it would get a piece of tape. Above that is the production schedule for Near & Far. 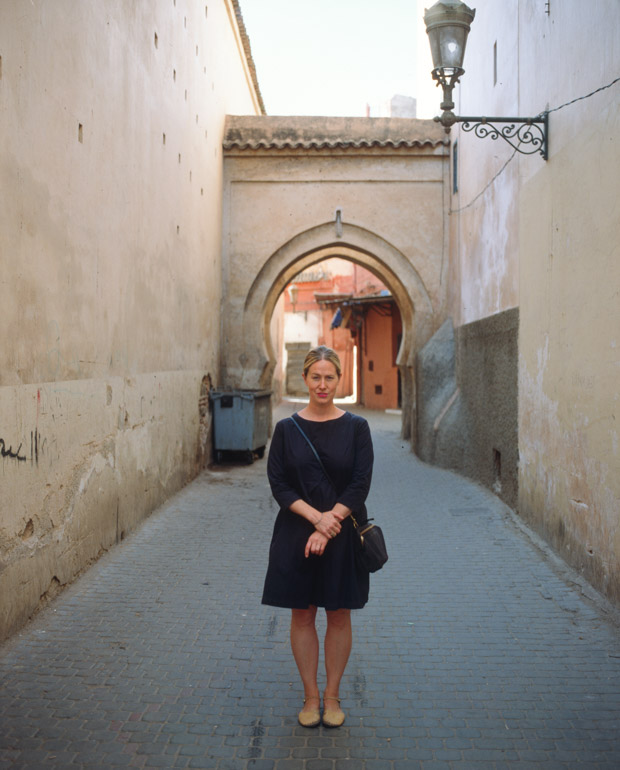 - Above - In Marrakech. Attempting some sort of "author shot"...my expression is the realization that a speeding motorbike had just rounded the corner. 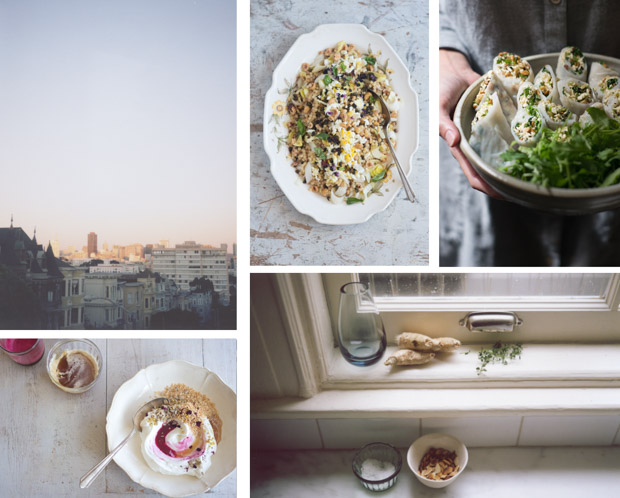 - Above - A collection of images for possible inclusion in the Ten Speed Fall 2015 catalog. 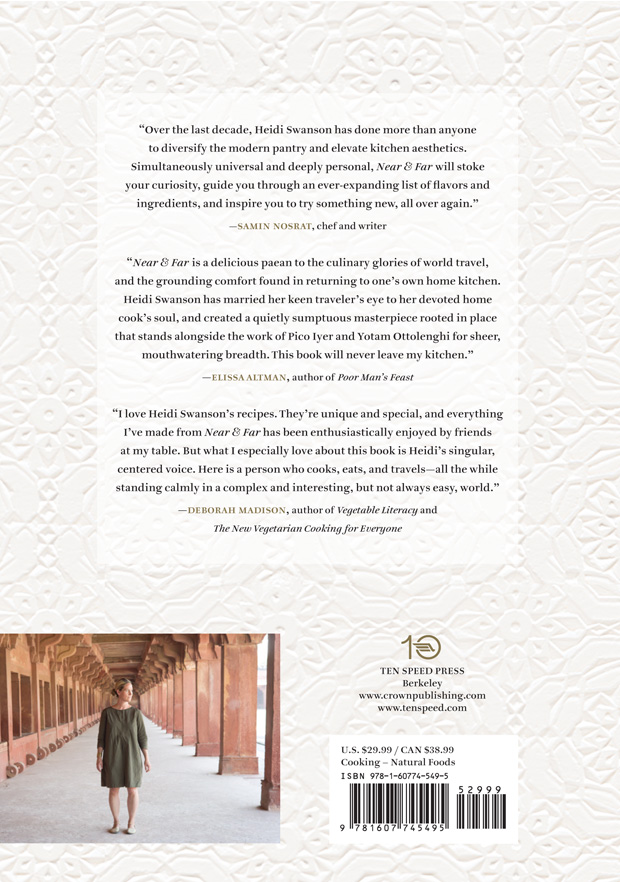 - Above - This is the back cover of Near & Far, and it is a reflection of a part of the process that I'm most thankful for. I think I speak for a lot of authors when I say it is initially difficult to start putting a new book out there. You've lived with it for a long stretch, and part of the process, after the manuscript is completed and the design is established, is circulating early copies of it. The earliest copies (either in PDF or galley format) go out to a short list of people who you hope might spend some time with your book, feel good about it, and write some kind words. This is one of the hardest "asks" for me. I know how busy everyone is, and I can't help but feel like I'm adding to the workload of some of the writers I admire most. Thank you Samin, thank you Elissa, and thank you Deborah - deepest gratitude and appreciation. 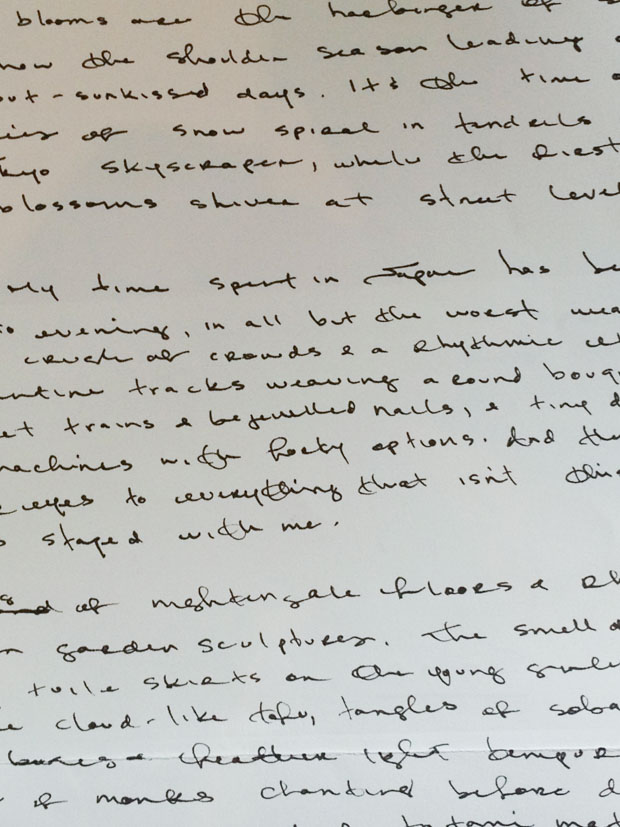 - Above - I found this scrap in my Near & Far folder the other day. I tended to write out the chapter openers longhand rather than typing them on my laptop. I actually do this on occasion with posts for 101 Cookbooks. It feels good. To be writing into a notebook or piece of paper rather than a keyboard and screen. I'm probably stating the obvious, but it helps me focus, no digital distractions. 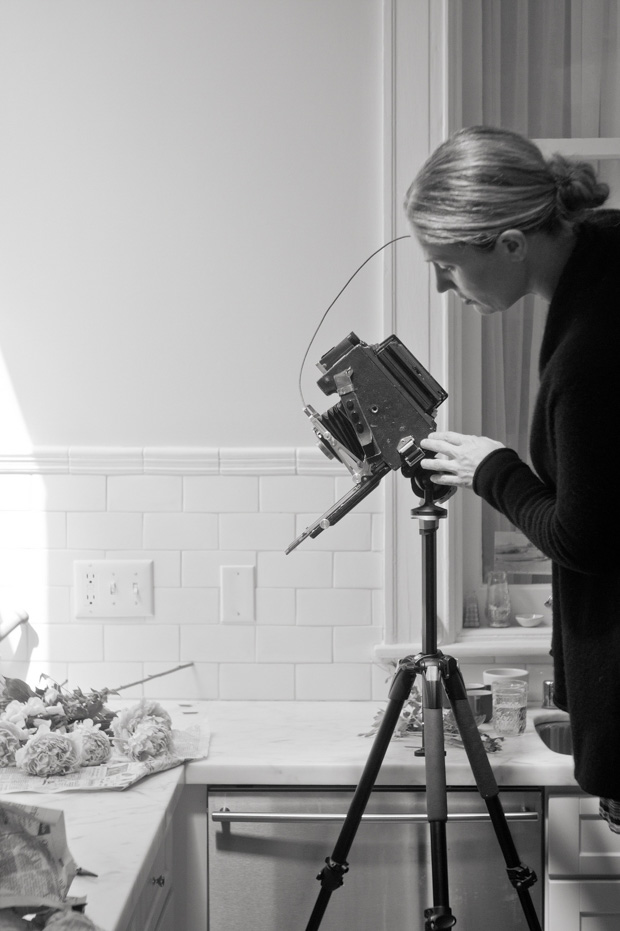 - Below - A few of you were curious about the styling and shooting of the book. I've been asked about the cameras I use, and whether I work with a team. Do you divide the shoots into intensive shoots, or chip away at it?

There are shots from at least five different cameras in this book. I shot a mix of film and digital. If I was shooting film, most of it was 6x7 or Polaroid/Fuji 3.25 x4.25 and 4x5. I used an old Polaroid Land Camera, a Speed Graphic, a Fuji folder 6x7 (great travel camera), and a Sony Nex 3 (this is the one I use now / this lens too) with an adapter so it could take my old Leica lenses (making it a great, compact travel camera). As far as the food shots go, I tend to shoot gradually over a long time period of time, on my own. That said, some of my favorite days working on this book were when I had help from two of my favorite people to cook with - Tina Dang and Emelie Griffin. We'd choose a handful of recipes to prepare, or work on, from the manuscript. We'd shoot along the way, and then enjoy a beautiful lunch together. Ironically, I don't have a shot of all three of us in the kitchen, but I do have one of us after a few drinks one night in a crazy bathroom (below). 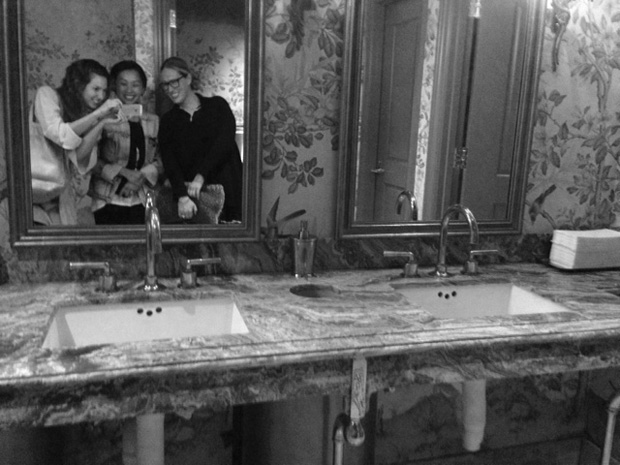 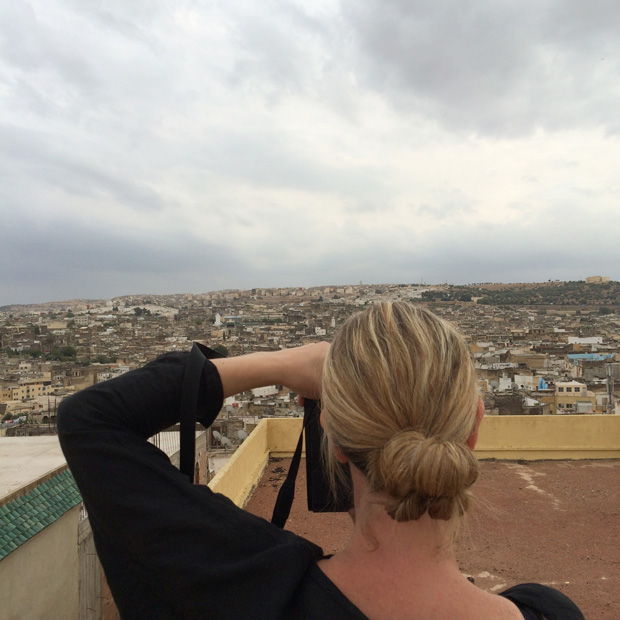 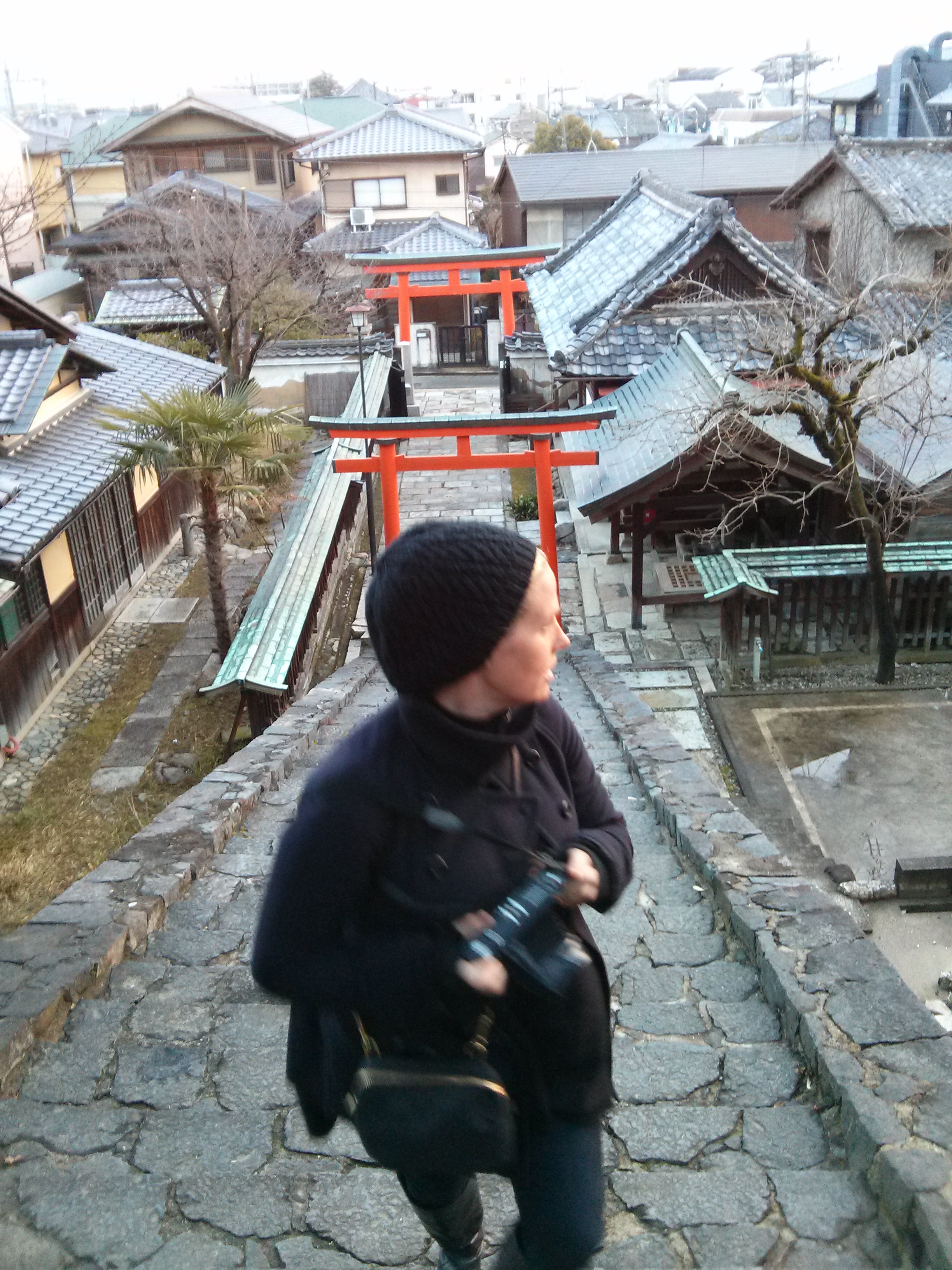 Right now the files are all at the printer, and we have finalized the design, color, and texture of the cover. You can see the examples of versions of the cases below. We get samples and compare different versions to try to get the right feel, look, etc.

As far as what is next, one of the aspects of the book making process that has been a bit of a mystery to me is the printing, binding, and assembly of the physical object. The book itself. But, I think that is about to change. I'm going to make a quick trip to Hong Kong, and then on to the printer, to see part of the process with my own eyes. Looking forward to sharing that part of the process with you in the coming weeks. -h