I spent most of the week under my favorite blanket on the couch - sniff, cough, cough, sniff, sneeze, repeat. The good news is I'm on the mend, and after a short walk today something tells me I wasn't alone in my misery. It seems as if half the city is coughing into their elbows. So yeah, last week was all about the small victories for me - going downstairs to get the mail, finishing a load of laundry (as in one), writing letters, and eventually, as I was starting to feel better, making a batch of orange and oat scones from the My Nepenthe cookbook. If only you could have been there when they came out of the oven, yum. 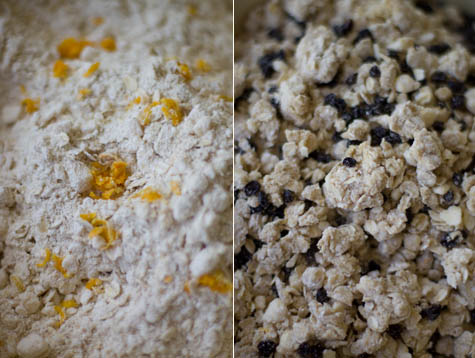 They were good later too though. I nibbled at a golden corner of one of the scones a couple hours after they came out of the oven, then four hours later, then six - they seemed to be improving with age.

In fact I wish I had one right now. In hindsight, I should have frozen some of the dough, then baked them off a few at a time.

I'm so looking forward to trying more from Romney's new book, she includes an eclectic mix of recipes including the full range of mains, soups, side salads. But it's the sweets and breakfast recipes that I suspect will make an appearance in my kitchen in the near future - the wheat germ buttermilk hotcakes, persimmon pudding cake, and the triple berry pie. 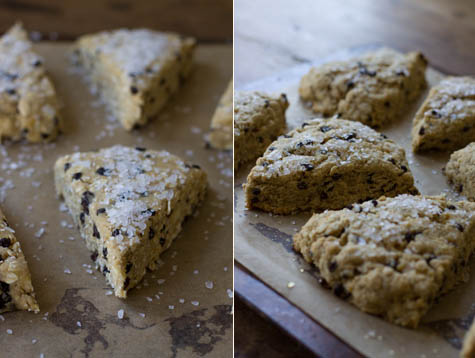 If you haven't seen the book yet, look around for it. I think it's just starting to show up in stores. It's just the sort of cookbook that takes you to another place and time - beautifully designed and photographed, and the story she tells of her life and legacy at Nepenthe in Big Sur is very special. For those of you who love the Tessa Kiros cookbooks, aesthetically this book is similar in spirit.

I made a few tweaks to Romney's original recipe, and they are reflected below. I use whole wheat pastry flour here, but you can use unbleached all-purpose flour, or a blend of both if you like. This version of the recipe makes 8-10 huge scones. The next time I make these I'll likely pat the dough into two 4-inch rounds and cut each of those into 6-8 smaller scones before baking.

Preheat the oven to 350F degrees. Line a baking sheet with parchment paper.

Combine the flour, 1/2 cup of turbinado sugar, baking powder, and baking soda in the bowl of a food processor. Add the butter and pulse 15-20 times or until it looks like sandy pearls. (If you are working by hand, cut the butter into the flour mixture using a pastry cutter.) Transfer the dough to a bowl and stir in the oats and zest. Stir in the buttermilk and currants until just moistened.

Bring the dough together with your hands. If the dough is still too crumbly, stir in more buttermilk a tiny splash at a time, but try to avoid over mixing. After bringing the dough together, gently pat it into an 8-inch round. Cut into triangle shapes (see photo) and transfer to the prepared baking sheet with some room between each scone. Sprinkle the tops with coarse sugar. Bake for 12 to 15 minute or until the bottoms are deeply golden.

This recipe was adapted from My Nepenthe by Romney Steele. Published by Andrews McMeel Publishing, November 2009. 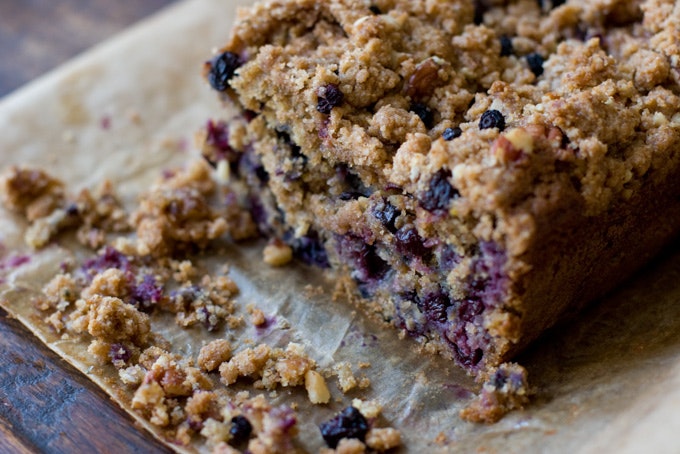 A stunner of a coffee cake with extra thick streusel topping and blueberries bursting into the tender crumb in dramatic fashion. Rustic and rye flour based. 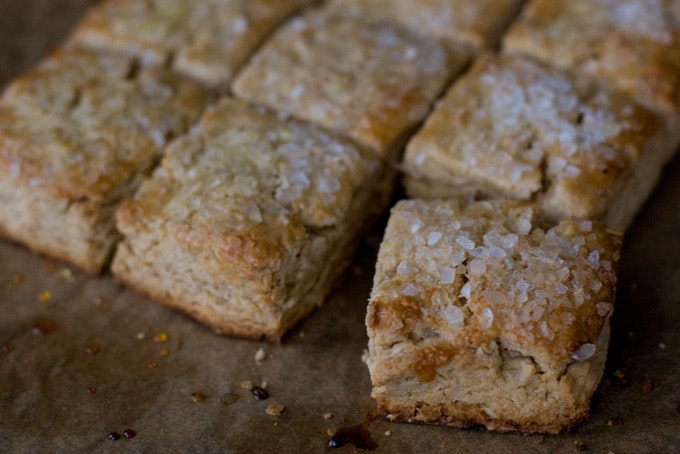 Two quick questions: fresh or dried currants, and do you have a recommendation for vegan buttermilk substitution?

I'm in search of the perfect currant scone with white flour (am allergic to whole wheat). I like them dense, not fluffy, and can't figure out if I should use cream, buttermilk or whole milk. I was just in London and tried a couple from Harrod's food court. Huge disappointment! Shouldn't Harrod's make the quintessential scone? Go figure!

I'm excited to try these. I think people usually think of scones as terribly unhealthy, full of white flour and devoid of fiber. But these use whole wheat flour (!) and oats (!). They also sound terrific for winter, with those standbys of orange zest and currant. You have such terrific taste in recipes.

oh, yum. I see scones in my near breakfast eating future.

I am on the hunt for the perfect scone recipe. They always seem to come out too cake-like for me. I need them dry, crumbly, and begging for a cup of hot tea. I hope these are it!

I love scones but haven't seen one out of oats that I've liked yet but these look so good I think I'll give them a try. Thanks!

Everyone on the east coast is sick too. Maybe I should take your advice immediately and stock the freezer with dough. The vitamin C will certainly help ward things off in meantime. Thank you... Michaela

Hi! Just started exploring your blog, I used to think scones were like little biscuits :) . this one looks lovely great recipe to try on my 2 yr old who hates oatmeal :)

These look delicious. Anything flavored with orange is a plus in my book :)

I love the idea of orange in a baked good. This sounds wonderful... so quintessentially autumn, with the citrus, oats, and currants. And sugar crystals! Bookmarked :)

Being British, I have to say that I'm quite partial to a good scone! These sound wonderful! The orange zest is a brilliant addition!

Quick questions: Whole oats as in steel cut or old fashioned? The picture looks like old-fashioned, but I want to be sure before I try these. Thanks. Roberta HS: Sorry for the confusion Roberta, I used old-fashioned rolled oats.

These look lovely. I adore scones and I think they are so underappreciated in America. I can't wait to try these out.

I don't know Romney personally, but we share a mutual friend, who recently blogged about My Nepenthe. I am looking forward to the recipes in that book.

Scones are my absolute favorite! It's my favorite food to have in the morning w/coffee :) I've never actually made them from scratch... don't know why, but I've always felt intimidated by scones... Your recipe looks great! I need to give it a try!

There's something very refreshing about orange with oats. It sounds mildly astringent and yet enough grain to satisfy. We have an expert scone maker here on Hornby Island who specializes in ginger scones. I'll have to turn him on to these orange scones to add to the repertoire.

These look beautiful! Did you find the dough was very crumbly when you made it? I made blueberry scones earlier this Fall and I ended up with very sticky, moist dough and had to add lots of flour to counteract that. Even still, they were almost too sticky b/c the scones ended up very dense. Either way, I think this might be my next scone recipe! :) HS: Hi Katherine, the original recipe calls for 3/4 cup buttermilk, and the dough was too crumbly. That sometimes happens when I switch to a whole wheat flour. Anyhow, I just added more buttermilk until the dough came together - ended up using 1 cup total.