Many of the natural food cafes I enjoyed while in Tokyo stocked a small number of products available for purchase - honeys, dried beans, t-shirts, and little books full of cafe recipes. Almost all of them sold small packets of mixed grains. Some of the packets were barely the size of my palm, filled with miniscule amaranth grains, brown rice, and millet. Others packets were bigger featuring a various blends of whole grain rices, quinoa, and different beans. I've never seen anything quite like it available here at home, and I was excited to come back and play around with some new grain combinations. This particular blend was inspired by one packet I brought home. There's nothing inherently Japanese about the end result, aside from the origin of inspiration. It features equal parts brown rice, red rice, and millet, plus some quinoa and amaranth. I've been enjoying it on its own, with a drizzle of soy sauce, and a couple drops of toasted sesame oil, but I could imagine this particular blend being great stir-fried with eggs and greens. Or fashioned into some sort of take on arancini by forming the cooked grains into balls, then dredging in egg-wash and breadcrumbs before pan-frying or baking. It could be a great stuffing for oven-roasted tomatoes, I could go on and on. Just keep in mind that the quinoa lends a dominant grassy note - and start thinking about ideas with that in mind.

I don't rinse the amaranth along with the other grains because the grains are SO tiny they run right through my relatively fine-gauge strainer. So I stir them in later. Short grain brown rice will give you a stickier rice blend in the end, use medium if you prefer more separation. The photo up above features short grain.

Rinse the rices, millet, and quinoa. Drain and put in a large thick-bottomed pot. Stir in the salt and amaranth. Cover with water up to your knuckle - about two inches above the grains. Bring to a boil, then turn down the flame as low as it will go. Cook uncovered (simmering) until all water is gone, about 45 minutes.

If you overshot the amount of water you added and your grains cook before the water absorbs entirely, strain off any extra water.

This makes a big pot of mixed grains. Plenty for multiple meals. 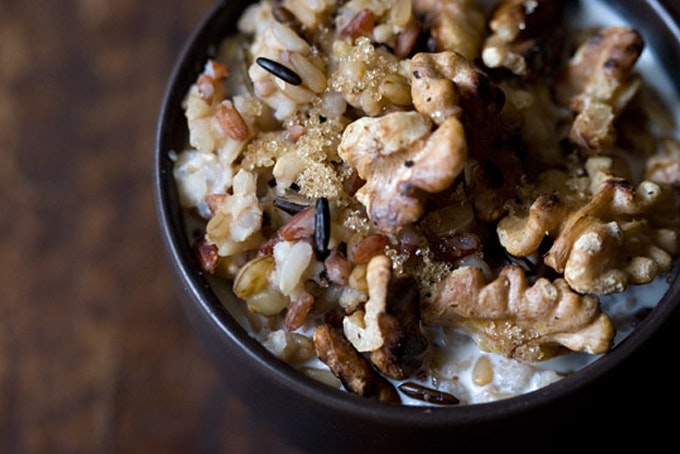 A simple, single pot mixed grain recipe inspired by a reader email from a grandmother of four - rice, oats, barley, and millet. 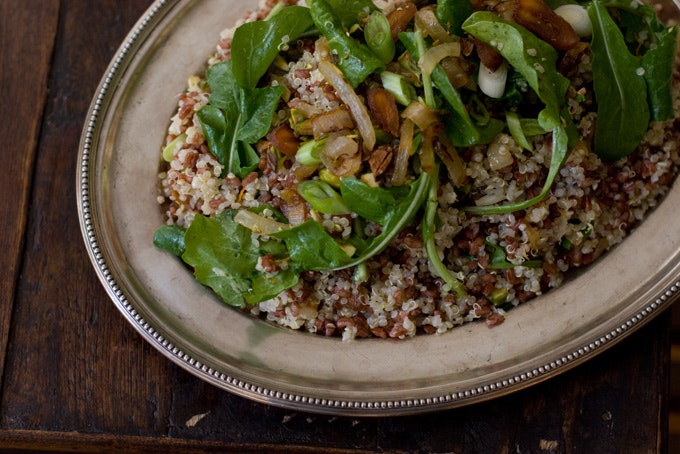 I live in Japan and use those packages in my rice cooker. Then I make onigiri with it or eat it with vegetable curry or with just some furikake on top. It's great but also a bit pricey in Japan. To use it in your rice cooker add about 3 tablespoons and a bit more water and cook on the regular setting. I usually make 3 cups of rice this way at a time. What rice I don't eat I put in small containers and freeze. It reheats nicely. HS: Thanks for the insight Melanie.

I like to mix quinoa and cracked wheat in my tabouli. I will try this combo. for tabouli next time. I have never tried cooking with millet and amaranth before. I will buy them in sample sizes next time I go to my co-op grocery store, and will them give them a try. Sadly, that won't happen for few more days. The only store that sells natural foods and grains is in the nearby city..I ususally visit it once a month or so. Guess what, I just went there yesterday. P.S. when you say "equal parts brown rice, red rice, and millet, plus some quinoa and millet" in the post, you mean amaranth, right? I wouldn't have pointed it out. But, I have come to know you as a perfectionist. HS: Thanks Gayatri - I just fixed it.

I've tried something very similar from Joannne Weir. But her recipe was more of a north african spiced pilaf with the addition of some dried fruit and nuts. Unfortunately, I didn't really like the "gelatinous" quality that the amaranth gave. Maybe it's time to give it another go, now that I know what to expect:) I love the arancini idea!

I love trying different grains! The mixture of these grains together looks great... I bet the texture was awesome!

If you go to an asian market, you will find these mixed grain packets. I found some in Japantown and 99 Ranch Markets. They are a bit pricey. You can make your own, but I noticed the dried beans in the packets are much smaller so it will cook the same time as the rice/grains.. I came up with my own version of mix and is quite satisfy with this version. I like to eat it plain on its own. The sweet glutinous rice gives it a nice flavor and texture. The sesame seeds gives it a nutty flavor. I make a large batch of this grains and store it in the fridge and it will last us for a few days. With the inspiration of Grandma’s grains and Japanese packet rice/grain mix, here is my own concoction: 3/4 cup medium-grain brown rice 3/4 cup red rice 2/3 cup dried hulled barley 1/2 cup dried brown lentils 1/3 cup dried whole oat groats 1/3 cup dried spelt berries or farro 1/3 cup sweet glutinous brown rice 4 tablespoons raw brown and black sesame seeds 6-1/4 cups water 1 teaspoon salt Thoroughly wash and drain rice, grains, beans and seeds well. In a heavy saucepan, combine all the grains, water and salt. Bring the grains to a boil. When the grains comes to a boil, give the grains a good stir, cover pot and reduce heat to the between medium-low and low heat. Continue to cook UNDISTURBED for about 40 minutes. Then reduce heat to low heat and cook for another 10 minutes or until water is completely absorbed. Total cooking time will be 50 minutes. Remove pot from the heat and let rice sit, covered, for approximately 10 to 15 minutes. Gently fluff the grains with a fork. If grains is slightly wet, transfer hot grains to a sheet pan and spread rice out to air dry until cool enough to transfer to an airtight container, occasionally turning rice over to continue to air dry. Grains will become dry when air dried this way. Store rice in an airtight plastic container in the refrigerator.

This is a nice and creative reminder to get those whole grains in a different way. I love how endlessly adaptable they are. I'm also a big fan of a bowl of grains for breakfast, thickened with a beaten egg and a bit of milk and cinnamon.

I use a similar five grain blend in my morning porridge. I soak them all together overnight and then cook them up with some cinnamon and fruit- typically brown rice, millet, amaranth, teff, quinoa and buckwheat. Ensures a broad spectrum of minerals and amino acids- and most importantly- it's yummy.

Making Love In The Kitchen

Ever since your post about "Grandma's Grains" last summer, we've been doing a very, very similar creature. We call it our "grain pot" and make a bunch at the beginning of the week for the starch with dinner all week. Goes great with bean dishes, stirfries, saucy stewy dishes, etc. our is usually 2 part millet, 1 part sweet brown rice, 2 parts red quinoa, 2 parts golden quinoa, and 1 part wheat kernels.

I am sloooowly getting my family to try different, and more nutritious, grains. This is no easy task; you should have seen how long it took for them to even like brown rice! They like quinoa, too. There is a store here that does have a very nice supply of different grains and rices and flours and 'gourmet' items; I'll have to look more closely this Friday! HEIDI: Any tips to introducing the family to these new, healthier delights?

I have a small bag of teff that I may add to this mix as well. It sounds yummy! Did you have trouble at all with customs bringing food back into the country after your trip?

Awesome recipe, it sounds wonderful! Also: "I dont rinse the amaranth along with the other grains because the grains are SO tiny they run right through my relatively fine-gauge strainer. So I stir them in later." Wonderful tip! My fine strainer is probably way bigger than the tiny one that you have, so I'll be stirring them in later too! Thanks!

Excellent post. It's cool to see all the different ways to prepare rice.

This sounds interesting. You know, the very cool thing about visiting these blogs is that you see a lot of things that you would never think of. I really enjoy everything I've read here. It's always an exciting experience.

Do you think this could be done in a rice cooker? Just checking :) Thanks!

I've been playing around with different grains too, but I haven't been able to find a combination that cooks evenly together. I've been covering the pot though - maybe that's the difference. I will definitely give this a try - thanks!

My very first thought on reading this recipe was: I bet it would go great in Heidi's mushroom casserole! (That recipe is one of my very favorites of yours, by the way.) Have you tried it there yet? HS: I haven't Tracy, but I imagine it would be quite good.

We have the same thing in Korea! Very nutty and nutritious and versatile. Great post!